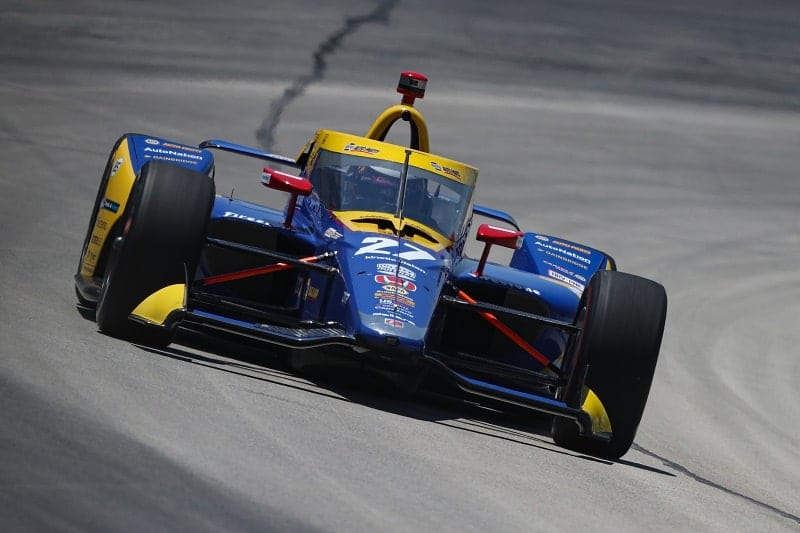 Alexander Rossi on track during the 2020 Genesys 300. (Photo Credit: Chris Owens/Courtesy of IndyCar.)

While the Michael Andretti-owned Andretti Autosport is the flagship NTT IndyCar Series team for the legendary racing name, the team also has a pair of subdivisions by way of partnerships with Harding Steinbrenner Racing and Herta Autosport.

All told, the three teams ended up with six different cars under six different drivers in 2020, with four full-time wheelmen and two part-timers at the controls.

Arguably Andretti’s prime component and one of the sport’s most prominent young talents, Alexander Rossi had every reason to be confident heading into the 2020 season. He won the 100th running of the Indianapolis 500 back in 2016, came close again in 2019 and was entering his third season with Andretti, having won five races over his first two seasons with the team.

None of that happened this time around. Rossi went winless and, despite five podium finishes, couldn’t even score a pole and finished ninth in the standings. His average finish, which had been higher than seventh each of the past two years, plummeted to just south of 12th. In fairness, he had a rough season — he led 17 laps in the year’s 500 and was charging back toward the front when he smacked the wall.

That was one of four total DNFs — almost a quarter of the season, including one at World Wide Technology Raceway at Gateway, where a lap 1 crash, resulting from a late green flag, took out Rossi and two other Andretti cars before the race even began.

Rossi’s season generally unfolded in that up-and-down fashion: he started the season with three finishes of 15th or below, bounced back with three top-10s, then crashed out twice before rebounding again.

Teammate Ryan Hunter-Reay finished below Rossi in points in 10th, continuing a seemingly gradual downward trend for the 2012 series champion. He managed just one podium despite finishing half the races in the top 10, only leading four laps all season.

Hunter-Reay’s bright spot came at the Mid-Ohio doubleheader, where he qualified second for the first race and finished in the top five in both events.

Despite a finish of fourth in the season opener at Texas Motor Speedway, Zach Veach‘s season spiraled from there as the driver never found a finish higher than 14th through 11 rounds of the season. He was informed earlier in the year that he would not be back with the team for 2021 after driving the No. 26 since 2018 and decided to drop out of the final three races for Andretti to work on a replacement.

That replacement could be James Hinchcliffe, who piloted the No. 29 car in the final three rounds, as well as the No. 26 in three additional races earlier on in the season: the opening two races at Texas and the Indianapolis Motor Speedway road course, as well as in the 500. Hinchcliffe recorded a seventh-place effort in the sport’s most prestigious race but ended up midpack in most of the other races. This all came after the six-time series winner was out at Arrow McLaren after 2019 and signed the part-time Andretti deal for 2020.

The Canadian kept his equipment clean, too, completing his six-race schedule without a DNF. He led a lap at Indianapolis’ oval and a pair at the Grand Prix of St. Petersburg, nearly equaling his average start with his average finish.

Colton Herta turned 20 years old in March. He was already a two-time IndyCar race winner by that time and celebrated two decades of life by finishing third in points. He won the latter of two races at Mid-Ohio Sports Car Course, finished in the top 10 11 times with two podiums and ended the first race at Iowa Speedway flying through the air; his No. 88 climbed over the back wheel of Rinus VeeKay‘s car, sending Herta’s machine about 20 ft. into the air and partially into the catch fence.

Herta was generally better on road courses than ovals, but that’s not to slight his prowess on the latter; he scored top-10 efforts in four of the six oval races. He had a rough go of it for both Iowa events (the spectacular crash was his only DNF of the year) but finished 11 of the 12 other races inside the top 10.

The California native also nearly led the second Mid-Ohio event wire-to-wire, winning the pole and leading 57 laps en route to the victory. Herta made it as high as second in the standings after back-to-back fifth-place finishes at Road America, falling to seventh after the rough Iowa weekend but climbing back up as the season wore on.

The 20th-place finish in the standings for Marco Andretti is only slightly reflective of the rough season the third-generation racer had.

Andretti, who hasn’t scored a podium since 2015, did net himself a pole at Indianapolis for the 500 but failed to lead a lap there. One top-10 finish wasn’t enough to salvage a season that ended with 10 results outside the top 20, five DNFs and an average finish of 19.3.

Herta is moving to the flagship team next year to take over the No. 26, while both Rossi and Hunter-Reay keep their rides with Andretti AutoSport. The Steinbrenner No. 88 has yet to fill its vacant seat, and Veach, Hinchcliffe and Andretti have not officially announced their 2021 plans.