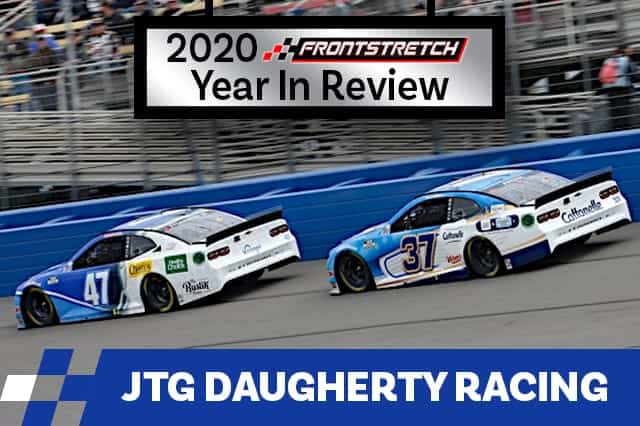 What a year it was for JTG Daugherty Racing.

After essentially swapping drivers with Roush Fenway Racing, JTG was primed to have greater success since expanding to a two-car organization in 2017.

Instead, the team endured the opposite. In a year that was derailed by the COVID-19 pandemic, both Ryan Preece and Ricky Stenhouse Jr. finished worse on average than they did in 2019. Though Stenhouse earned three top fives and Preece nabbed two top 10s, crashes and mechanical issues set them back for much of the season. Additionally, Stenhouse’s position in the driver standings went down from 23rd in 2019 to 24th in 2020, while Preece dropped three spots to 29th.

Things didn’t get off on the right foot three races into the year. At Auto Club Speedway, NASCAR penalized both teams. Their crew chiefs were suspended for the race, they were docked 10 points each in the standings and had to give up their starting positions during the pace laps.

Historically, Stenhouse’s strengths seemed to fit right into the JTG fold. His two wins are where the organization has its most top 10s — Daytona International Speedway and Talladega Superspeedway.  However, his aggressive driving often did more harm than good, especially this season. In fact, he didn’t even complete a lap in the first race back from the break at Darlington Raceway. The last-place result was one of seven total for JTG, and it was also his first retirement out of eight on the year.

Preece, too, had his share of struggles, as he also went out early in eight events, including the first two of the season. It was the most DNFs both drivers had in their Cup career; Preece had six in 2019, while Stenhouse had six in 2017 and 2018.

The team’s worst stretch of the season was July. It finished dead last in every race, with Preece taking home three of those. Kansas Speedway especially was horrible for the pair, as Stenhouse suffered an electrical fire in the car, while Preece had a horrific crash on the backstretch.

“To be honest with you, we had a fast race car right there at the end,” Preece told NBC after the race. “It’s frustrating for all of us at JTG Daugherty because we’ve been working really hard and probably had a top-10 car there at the end. I’m all right, just ready for this year to turn around.”

Though the No. 37 car had a rough year, it had a few highlights as well. Preece scored good results at Bristol Motor Speedway, though those were overshadowed by others battling for the lead in the final laps. Still, he earned one of his two top 10s at the 0.533-mile track.

Additionally, he led 12 laps in 2020, including eight at the Charlotte Motor Speedway ROVAL. The wet racetrack didn’t derail his strong performance, and he ended the race with a top 15, his final one of the season. This shouldn’t be too unusual for the underdog team, as AJ Allmendinger earned JTG its lone victory at Watkins Glen International. The team also has four top fives and six top 10s in total there throughout its Cup tenure.

Conversely, one of Stenhouse’s highlights featured a near playoff berth at Talladega. However, instead of tacking on his third victory at a superspeedway, he lost to Ryan Blaney by the narrowest of margins, 0.007 seconds.

“It’s been great,” Stenhouse told reports on a Zoom call. “I’ve enjoyed every minute of it from the first time we went over there, sat down with Tad and Jodi and Ernie and ate dinner. I felt welcomed. I felt like it’s a family atmosphere. Also they get the job done. Any money that comes in they put right back into our race team buying parts and equipment, making sure we can perform the best that we can perform with what we got.

“We’ve got fast racecars. We have had some mistakes that have cost us, some on my end, some on the car’s end. We’re in there together, trying to clean everything up, trying to make sure we put our best parts forward. We’re looking forward to the rest of the year.”

Stenhouse’s other three top 10s came at two 1.5-mile tracks (Las Vegas Motor Speedway and Charlotte) and at Dover International Speedway. Additionally, the veteran held the top spot for 68 circuits in 2020, though 54 of those came in the first two races in February. Unfortunately, the crashes and mechanical problems seemed to overshadow his and Preece’s 2020 accomplishments.

Would practice time have helped deter some of these issues? Maybe; the drivers could certainly relay information to the crew so they could make necessary adjustments. Also, the crew could check for any mechanical ailments before the race. However, that would’ve required preparing a backup for each weekend, and while Kroger and a wide array of brands sponsored the cars each week, it was still a financially unstable season for much of the other teams. Practice unfortunately wasn’t practical during a pandemic.

Besides, Preece and Stenhouse both had prior seasons with six DNFs while practice was still available.

The pair is slated to return to JTG in 2021; Stenhouse is on a multi-year deal, while Preece confirmed his standing on SiriusXM NASCAR in November.

This was fun having them out for a workout this year. Really looking forward to this off season and for massive improvements in 2021 we have a ton of potential @JTGRacing https://t.co/o6SZQGixXr

The team needs better luck in 2021 to get back on the path to success. It will need to avoid pit road penalties and problems on the racetrack that can quickly turn around a strong showing. Preece definitely needs a bounceback after his sophomore slump. It’ll be interesting to see if Stenhouse’s veteran presence can help right the ship, or if things will again turn sour for the underdog team.