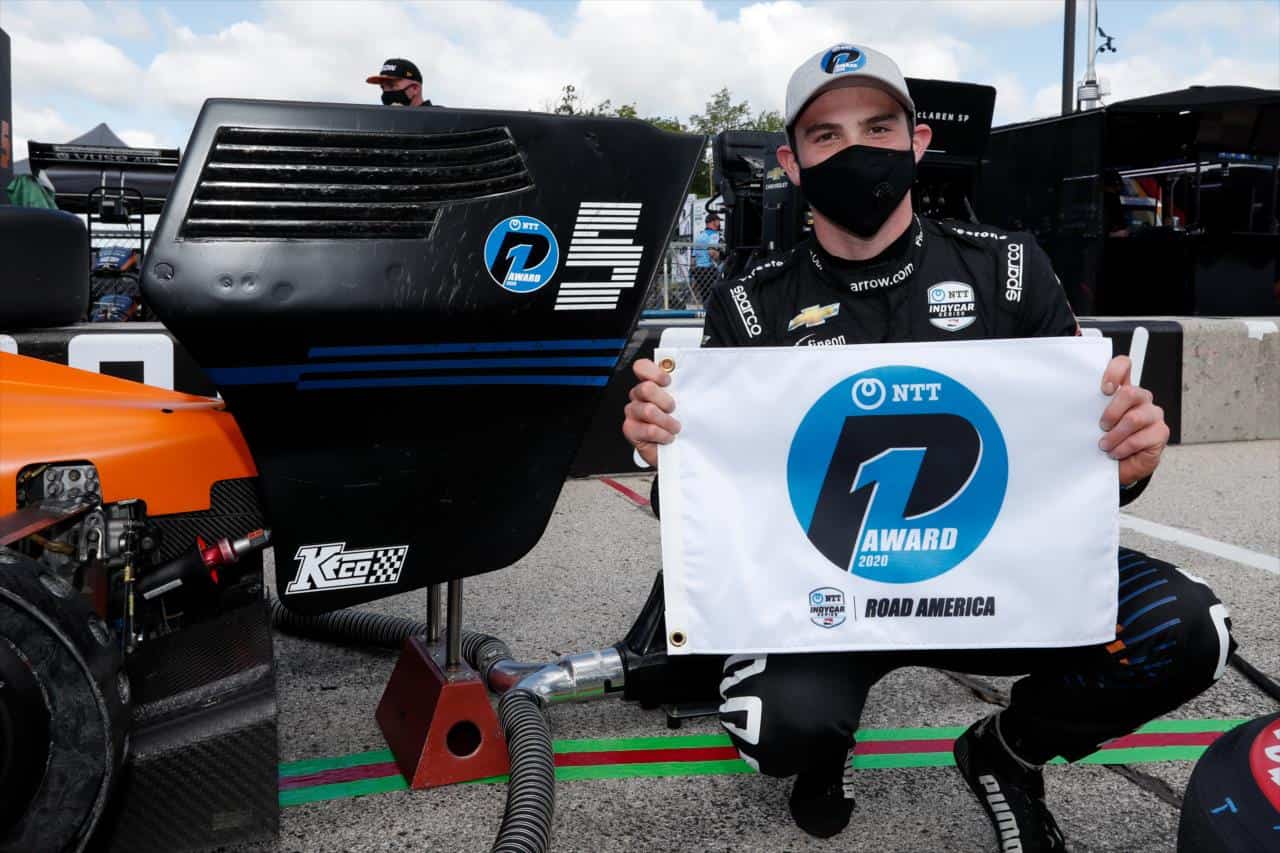 The team formerly known as Arrow Schmidt Petersen Motorsports abbreviated its moniker as its joined forces with Formula 1’s McLaren Racing for 2020, with unfortunate circumstances ending up continuing its NTT IndyCar Series stable format of one full-time driver alongside several part-time pilots.

Longtime Arrow driver James Hinchcliffe and the team parted ways after the 2019 season, opening the door for Patricio O’Ward to embark on his first full season in IndyCar, while three other drivers drove two different cars for the team — chief among them rookie Oliver Askew, who racked up seven wins, seven poles and 15 podium finishes en route to winning the 2019 Indy Lights championship.

O’Ward was one of the season’s brightest young stars, ending up an impressive fourth in the standings at year’s end while scoring four podium finishes and a pole. He was leading late in the fourth event of the season at Road America until Chip Ganassi Racing’s Felix Rosenqvist passed him, but he still finished second and did so twice more in 2020.

Not technically a rookie but a first-timer in the full-time driver category, O’Ward found his footing early on; he won nine out of 17 races in the 2018 Indy Lights season on his way to a title, and seemed to quickly grasp the rigors of a full-time undertaking in the premier level of IndyCar.

O’Ward also took care of his equipment, running at the end of every race and recording top-10 finishes in 10 of the 14 events, including a sixth-place effort at the Indianapolis 500 — the result earned him Indy 500 Rookie of the Year for the 2020 edition of the race.

A pole for O’Ward came at the second Road America race, which he nearly won, and he added several more impressive qualifying runs as the season wore on; he also led more than 200 laps across five races. From the fourth race of the season onward, O’Ward never dropped out of the points standings’ top five, climbing as high as third for two- and five-race stretches before mostly settling into fourth.

The consistency of his season is what defined O’Ward’s first full-time effort in IndyCar. It’s a safe bet that he has a good chance to score his first win next season, with Arrow bringing him back in the No. 5 amid the expanding McLaren partnership.

The highly touted rookie Askew’s season quickly took a downward turn when he crashed during the Indianapolis 500, an accident that reportedly led to concussion-like symptoms and aftereffects for the 24-year-old. Askew was slated to be the second full-time driver alongside O’Ward but ended up missing two races due to the violent wreck.

Things started out well enough with a ninth-place finish at the season-opening Texas race, but that was followed by three straight finishes outside the top 10 before Askew rebounded with his first-career podium at Iowa Speedway. After a sixth there the next day, Askew’s year spiraled and he never scored another top 10, which could partially be due to the crash he suffered the next race at Indy.

Askew lost control as the field slowed under yellow and broadsided the inside wall at nearly full speed, climbing out afterward but needing several moments to gather himself before he went to the infield care center. His results dipped after that and the reverberations of that crash seemed to resonate throughout the season, culminating in a team announcement prior to the late-season doubleheader at the Indianapolis road course that Askew was not medically cleared to race.

Helio Castroneves swooped in for the save for Arrow, taking over the No. 7 for the two events that Askew missed. After spending 270 IndyCar starts with Team Penske, Arrow became the first team that the veteran drove for outside of the motorsports powerhouse. He ended up 20th and 21st at the Indy road course.

Askew returned for the final race of the season at St. Petersburg but qualified midpack and finished 16th.

Formula 1 champion Fernando Alonso also joined the team for a 2020 start. After McLaren Racing fielded an Indianapolis 500 entry by itself with Alonso at the wheel in 2019 but failed to make the race, it brought him back for its 2020 venture with Arrow.

Alonso’s No. 66 made the race this time around but qualified 26th and was never really a factor, ending up 21st.

Outside of O’Ward, Arrow was never really in contention for much of the season.

O’Ward is back in the saddle of the team’s No. 5 for 2021, once again for the full schedule. With Askew out after 2020, Arrow elected to go with Rosenqvist in the No. 7 for a full-time gig, while all-around motorsports veteran Juan Pablo Montoya was recently announced to be joining the team for the 2021 Indianapolis 500. A two-time winner of the prestigious event, Montoya will compete for Arrow in a car with a yet-to-be-announced number.

Despite his lack of a 2021 ride, it’s worth noting that Askew was on the right track before the crash at the 500 marred his season; his results were improving and he had just finished on the podium for the first time. Andretti Harding Steinbrenner Autosport and Ed Carpenter Racing still have open seats.

Alonso, meanwhile, will join Alpine F1 team in the stable’s first-ever Formula 1 season in 2021, making the move back to his racing roots. Castroneves hops to the expanding IndyCar operations of Meyer Shank Racing for a part-time schedule in the No. 06 car.

Juan Pablo Montoya was announced for only the 500.