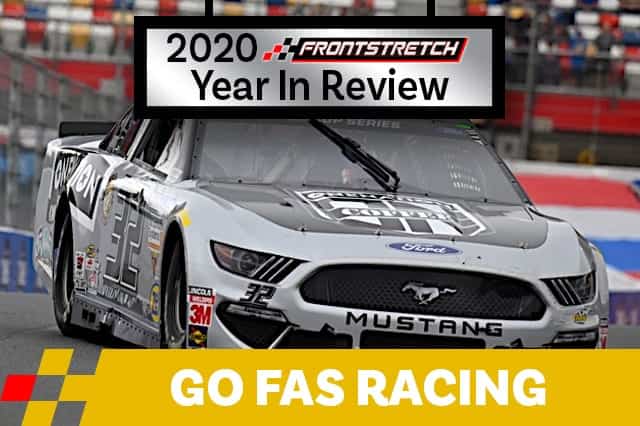 In its fifth straight year of full-time competition, Go FAS Racing made a few improvement over previous years, even though in the final tally it finished one position worse in the standings.

Driver Corey LaJoie competed in all 36 races for his second complete season in the NASCAR Cup Series and led his first 13 laps in the series.

The season started off strong until a few feet from the finish line at Daytona International Speedway. LaJoie was headed toward what eventually became his only top 10 of the season after a smart race. Contact occurred at the front of the field, and Ryan Newman‘s car ended up on top of LaJoie’s No. 32. He still crossed the line in eighth, but his car was demolished.

After returning from the COVID-19 break in March and April, LaJoie started a strong summer for GFR with a run of four top-20 finishes in 10 races from the second Charlotte Motor Speedway race through Texas Motor Speedway. The next eight races saw five finishes between 21st and 23rd.

But when the playoffs arrived, things took a downturn, with four of the team’s six DNFs coming in the final 10 races.

After the Daytona road course race, it was announced LaJoie would not return to GFR in 2021. Two months later, it was revealed that GFR will cut back to a part-time schedule in 2021, which, assuming LaJoie saw that writing on the wall, made perfect sense out of his decision.

2020 saw the best average starting position for GFR as a full-time team, at 28.5. It was also its best season for average finish, taking the checkered flag at an average position of 25.6. 13 laps led for LaJoie was a personal best, and it was also the team’s best under owner Archie St. Hilaire. The previous best was 12 laps in 2017 with Matt DiBenedetto. LaJoie led 11 of his 13 laps in the two races at Martinsville Speedway.

Speaking of Martinsville, in the June race LaJoie brought back a car that made headlines for the team a year before — with a twist. LaJoie ran a car in the Daytona 500 in 2019 that featured his face as the primary focus of the paint scheme, his handsome young mug plastered across the entire hood of the car. At Martinsville, in an effort to promote mask wearing amid the COVID-19 pandemic, LaJoie brought the face scheme back — and this time, his face was covered with a mask.

While the team and LaJoie had career bests in average start, average finish and laps led, it slipped on spot in the final season standings. After consecutive 29th-place season-long results, GFR wrapped up the year in 30th, 69 points away from a third-straight 29th.

The season, as it was for many small teams, was a struggle, for sure; LaJoie’s signature phrase “stacking pennies” was never more true. With limited resources and personnel, the little team that could got the most out of its cars most every race weekend. In listening to post-season interviews, it is apparent that lack of resources was a large hindrance to performance.

LaJoie and crew chief Ryan Sparks are both moving to Spire Motorsports in 2021 to begin building that organization from the ground up.

After the season ended, St. Hilaire sold his charter to the newly formed Live Fast Motorsports team founded by BJ McLeod and Matt Tifft. GOFAS will continue to run a limited schedule in 2021.