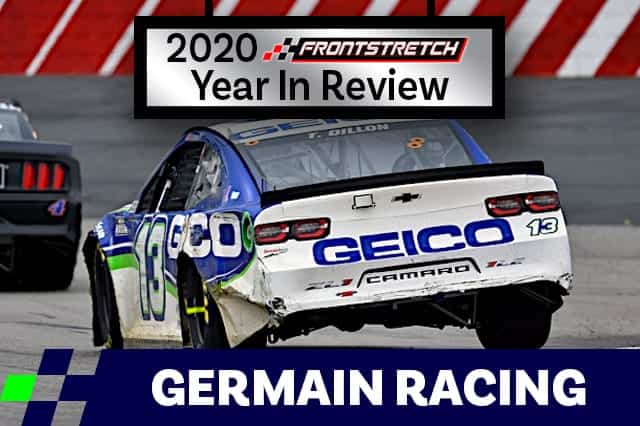 2020 was Germain Racing’s 10th full-time season in the NASCAR Cup Series – and ultimately its swan song.

With long-time sponsor GEICO not returning for 2021 and presumably exiting the sport after being a fixture for over a decade, Bob Germain announced in September that the team would be shutting down and not returning for 2021. Such marked the end of one of the most recognizable team and sponsor alignments in the premier series.

The results with driver Ty Dillon were similar to that of previous few years, finishing 26th in points.

Dillon completed in all 36 races, leading 14 laps, one more than in 2019. The season was unremarkable as prior outings, with a top-10 finish in the second race of the year at Las Vegas Motor Speedway and a third-place run at Talladega Superspeedway, moving up one spot after Matt DiBenedetto was judged to have gone below the yellow line.

The balance of the season was almost a replay of the previous three. Such has been the fate of the majority of the single-car satellite teams that are aligned with Richard Childress Racing. They seem to run about the same and finish within a few positions of each other, and 2020 was no exception.

Dillon’s 26th-place points result was bookended by the JTG Daugherty Racing duo of Ricky Stenhouse Jr. in 24th and Ryan Preece in 27th, while Richard Petty Motorsports’ Bubba Wallace was able to move up to 22nd in points this year, just three spots behind the actual RCR entry of Tyler Reddick.

This season, the average start for the No. 13 Germain team fell from 23.5 to 25.6 – not really apples to apples given the lack of practice and qualifying for many events this year, but the average finish was essentially the same between 2019 and 2020, falling from 20.6 to 22nd.

Again, a lackluster season and middling mediocrity that has all but defined single car teams in the series for about as long as anyone can remember has put Dillon in an unenviable position. It wasn’t that long ago that he and Chase Elliott were tangling at Canadian Tire Motorsport Park on the final turn in the Camping World Truck Series in what was viewed by some as a glimpse into the future of what Cup battles would soon follow.

In 2020, Elliott won his first Cup championship, and as we sit a week before Christmas, Dillon’s 2021 plans remain up in the air, further proof that regardless of what your family connections might be, this is still a humbling sport that can take a promising career and extinguish it in just a few seasons of fruitless returns, regardless of the quality of equipment.

While the natural perception would be that Richard Childress’ grandson should be getting equipment on par with brother Austin Dillon, who won a race and finished 11th, there is still a considerable gap between the parent organization, which was able to win a race, and the others that are typically mid-pack fixtures with the exception of the four superspeedway events. Crew chief Matt Borland being in his third season with Dillon and team and the Chevrolet Camaro on a more even keel that it had been the last couple of seasons seemed to have little effect on the ultimate result and performance of the team that is now shuttering for good.

The team has sold its charter to the new team 23XI Racing group, owned by Michael Jordan and Denny Hamlin, with Wallace at the helm for 2021.

Put Ty in the 3, and let the clown bring him water.