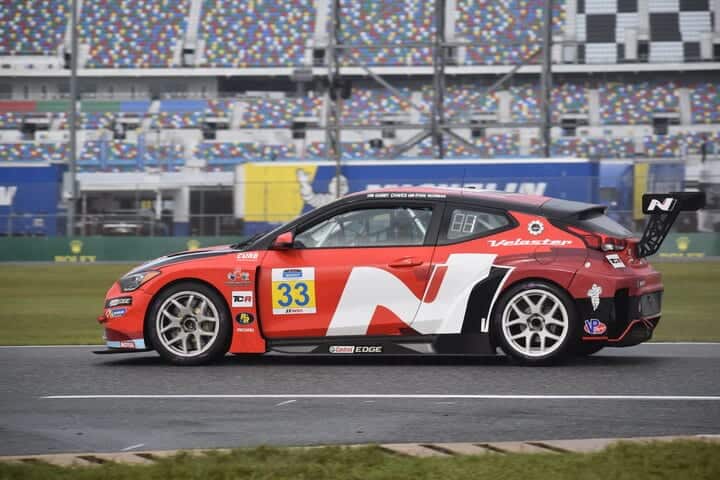 Bryan Herta Autosport along with Hyundai Motor North America announced that BHA will be the launch team for the new Hyundai Elantra N TCR.  This new car will be immediately eligible to compete in IMSA Michelin Pilot Challenge’s TCR class, along with TC America’s TCR class and other various TCR classes around the world.  For North America, BHA serves as the distributor for Hyundai TCR cars for North America.  The new Hyundai N TCR is available for purchase by customer teams right now.

The new Elantra N TCR is based on the brand-new 2021 Hyundai Elantra, which was just released for public sale recently.  There will be performance versions of the car released for public sale.  As of now, there are three regular trims available.  2021 will see the release of the Elantra N-Line, which will be a heads-up competitor for the Honda Civic Si.  Towards the end of 2021, the Elantra N will be released.

“The Elantra N TCR takes full advantage of the new road car’s stable, high-performance chassis and sleek sedan body shape to optimize its design,” said Olabisi Boyle, Hyundai Motor North America’s vice president of Product Planning and Mobility Strategy.  “Its bold looks on track are sure to bring a lot of new fans to the Elantra and N Brands. Seeing the new Elantra N TCR in the paddock for this first time is going to be awesome for race fans.”

In addition, Bryan Herta Autosport announced a three-car assault on the IMSA Michelin Pilot Challenge for 2021, but with some driver changes.  Harry Gottsacker and Mark Wilkins will stay together for 2021, but move into the No. 33, which will be one of the new Elantra N TCRs.  2020 TCR champion Ryan Norman will move over to the No. 98 Elantra and team up with Parker Chase, who drove the No. 29 last season.  Taylor Hagler will move over from LA Honda World Racing to drive the team’s third car, No. 77, with Michael Lewis.  This car will remain a Veloster N TCR for at least the early portion of the season.

Later on in the day, BHA announced a partnership with Michael Johnson Racing.  As a result, the team will field the No. 54 Hyundai Veloster N TCR for the duo of Michael Johnson and Stephen Simpson full-time.  Johnson and Simpson had previously competed full-time for JDC-Miller MotorSports in an Audi RS3 LMS Club Sport for the past couple of years and in Street Tuner before that in a BMW 228i.

The Hyundai Veloster N TCR was quite dominant in 2020.  Bryan Herta Autosport won seven of the 10 races in Michelin Pilot Challenge with three of their cars winning races.  Norman and Gabby Chaves won three races (Road America, Michelin Race Road Atlanta No. 1 and Laguna Seca) to claim the championship.  Ultimately, BHA Hyundais swept the top three in TCR points for the year.

In addition, the press release indicated that Mason Filippi, who shared the No, 98 Veloster with Lewis in 2020, will be back in a Hyundai full-time in 2021.  It is unclear whether that ride will be in Michelin Pilot Challenge or in TC America’s TCR Class.  As of now, there are five Hyundais confirmed for the full 2021 Michelin Pilot Challenge season.  Those are the four programs announced Tuesday and the previously announced program that will see Copeland Motorsports move over from TC America to compete full-time.