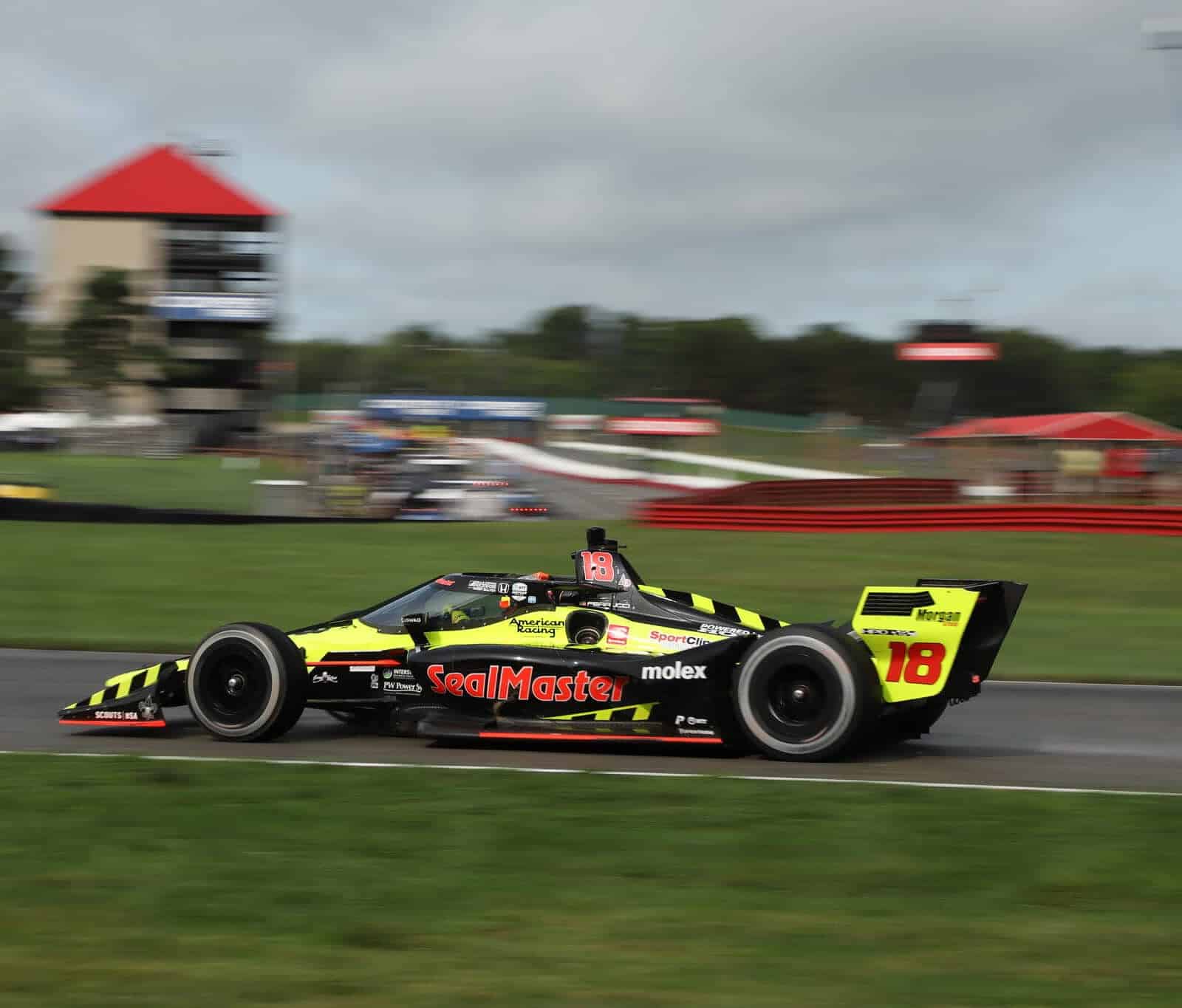 Dale Coyne Racing operated under three different awnings in 2020 in the NTT IndyCar Series, holding down a trio of partnerships for two full-time cars and a one-off for the Indianapolis 500.

The team continued its trend of spreading its resources across multiple partnerships, but after two years of doing so did not have a team under the solo name for the first time; instead, partnerships with Vasser-Sullivan, Team Goh and Rick Ware Racing highlighted the team’s associations in 2020.

Santino Ferrucci returned to the team in partnership with Vasser-Sullivan, switching from the No. 19 to the No. 18 and replacing Sebastien Bourdais, while rookie Alex Palou drove full time for Goh and James Davison drove in one race for the Ware team-up.

The Vasser-Sullivan partnership is the only consistent partnership year-to-year since Coyne split into multiple divisions starting in 2018, with Ferrucci taking over for Bourdais at the start of 2020.

Four-time champion Bourdais left large shoes to fill in the No. 18, in presence and performance; in two years with the team, the Frenchman won one race (the 2018 season opener at the Grand Prix at St. Petersburg) and tacked on two more podiums and a pole, finishing in the top 10 in half of the 34 races he contested.

Ferrucci debuted with Coyne in 2018 in a four-race stint, taking over the No. 19 full time in 2019 as a teammate to Bourdais. He finished a career-best fourth three times but only matched that performance once in 2020; the No. 18 failed to finish the first and last races of the season, bookending 2020 with DNFs due to a driveshaft and a crash, respectively.

The biggest headline for Ferrucci came during the COVID-induced hiatus of IndyCar, when many drivers competed in the iRacing IndyCar Challenge from the comfort of their own homes.

In the finale at the virtual Indianapolis Motor Speedway, Ferrucci was running second behind real-life 2020 rookie Oliver Askew toward the finish line when he suddenly turned dead left, hooking Askew’s car and sending both drivers’ digital vehicles into the wall and tumbling across the finish line. Scott McLaughlin won the race, and a number of drivers — Askew chief among them =- were ticked at Ferrucci for the move.

None of Ferrucci’s actions seemed to carry over into on-track consequences or payback, but the incident made headlines around the sport in its aftermath.

Rookie Palou landed the No. 55 ride for 2020, piloting the car for Coyne’s partnership with Goh, an organization primarily known for its forays into sports car racing; the season marked Goh’s first appearance in IndyCar.

Palou ended up with a considerable amount of poor luck in 2020, crashing out of three events, recording just three top-10 finishes and ending up 16th in the standings. He did, however, score the first podium of his young career at Road America in the season’s third race.

Unlike many of the season’s rookies, including Indy Lights alums Askew, Dalton Kellett and Rinus VeeKay, Palou had absolutely no experience at any level of IndyCar racing prior to 2020. Palou derives his racing background from a number of series and divisions, including Formula 2, Formula 3, Super GT and several others.

The season didn’t start off well for Palou, as fellow rookie VeeKay spun out of turn 2 at Texas Motor Speedway and collected the No. 55. Both drivers only lasted 36 laps in their IndyCar debuts, and despite a poor run the next week at the Indianapolis road course Palou rebounded for his first career podium.

Starting 14th at Road America in July, it took just 10 laps for Palou to climb into the top 10, and he spent much of the race inside the top five en route to the third-place finish. A seventh-place result the next day and a ninth in the penultimate race of the season were the best finishes for Palou through the rest of the season.

Arguably the most disappointing result of 2020 for Palou came in the second Mid-Ohio Sports Car Course event, where the No. 55 was caught up in a lap 1 melee and forced to retire.

Ware, primarily known for its endeavors in NASCAR, sports car racing and motocross, made its first venture into the IndyCar world in 2020, just like Goh.

It was a short-lived one, but Ware teamed up with Coyne for an Indianapolis 500 entry with Davison at the wheel. Davison raced in half of the last decade’s Indianapolis 500s — one-off races for him each year — and started 27th in the 2020 edition, but his No. 51 entry lasted just four laps before its wheel ignited.

The flaming Dallara Honda made its way to the exit of turn 1 before stopping, where safety crews extinguished the fire and Davison hopped out unharmed.

Ware is set to field four cars across its main NASCAR Cup Series team and a charter leased from Richard Petty Motorsports and has not given any indication as to if it intends to return to IndyCar. Belardi, meanwhile, folded in November 2020.

The website for Coyne currently has “2021 driver lineup to come” emblazoned on its roster page and has yet to announce any plans.

With a switch to the NASCAR Xfinity Series possible for Ferrucci in 2021 and Palou departing the team for Chip Ganassi Racing’s No. 10 car, it remains to be seen what the Coyne landscape will look like next year.

Drivers like Askew, Zach Veach and Marco Andretti have given no inkling as to what their plans for 2021 are, so it’s possible that one of them could be the newest Coyne driver if Ferrucci leaves.