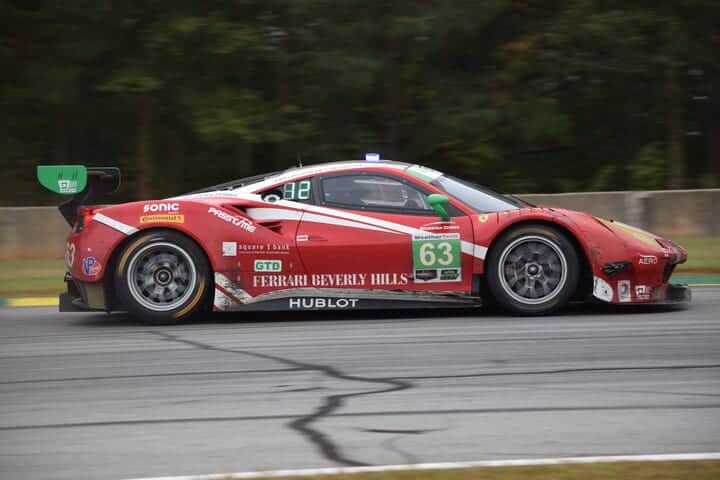 Scuderia Corsa announced Thursday (Dec. 24) that they will go in a completely different direction for January’s Rolex 24 at Daytona.  The team will revert back to the color red on their No. 63 Ferrari, last seen in the 2017 Motul Petit Le Mans at Road Atlanta (pictured above).  They will also have a brand-new driver lineup.

Ryan Briscoe, who drove full-time for Wayne Taylor Racing in 2020, just missing out on the DPi championship, will anchor the team.  He’ll be joined by Ed Jones, who has driven for Scuderia Corsa in the NTT IndyCar Series.  Rounding out the team will be Bret Curtis and Marcos Gomes.

“I’d like to thank Giacomo [Mattioli, team owner] for the opportunity to join Scuderia Corsa for this coming Rolex 24 at Daytona,” Briscoe said.  “This will be a new challenge for me racing in the GTD class in a Ferrari.  I’m very grateful and will do my part to fight for the victory and can’t wait to hit the track in a few weeks!  Happy Holidays and I wish everyone a safe and successful 2021.”

For Jones, Daytona will mark his IMSA debut.  He has no sports car racing experience in North America.  However, he has raced in the Dubai 24 Hour at the Dubai Autodrome in the past.  Curtis has raced off and on in IMSA competition over the past decade.  He hasn’t competed in the IMSA WeatherTech SportsCar Championship since a part-time schedule with Turner Motorsport in 2017.

Daytona will be Gomes’ third race with Scuderia Corsa, having previously raced for the team during the 2014 and 2015 Rolex 24s in association with Via Italia Racing.  In his most recent IMSA start in 2019, Gomes won the GT Daytona pole for the Rolex 24 with Via Italia Racing and ran well before dropping back to an eighth-place finish.

“I truly believe this lineup has a chance to win,” Mattioli said.  “They have the experience, the speed and the enthusiasm to succeed.  This race picks its winner, but you do have to prepare.  The team has been working all offseason for the return to racing.  Our partners TOTAL, Aero and Pacific Western are all excited to be back at Daytona.  2021 feels hopeful and we want to capitalize on the positive momentum.”

This is a big change for the California-based team.  The team has run under WeatherTech branding for the past three years with Cooper MacNeil driving full-time.  However, MacNeil opted out of a couple of races in 2020 in order to pursue the Ferrari Challenge championship.  That resulted in the team skipping the events at Mid-Ohio and Charlotte.  There is no word at the moment as to what MacNeil’s plans will be for 2021.