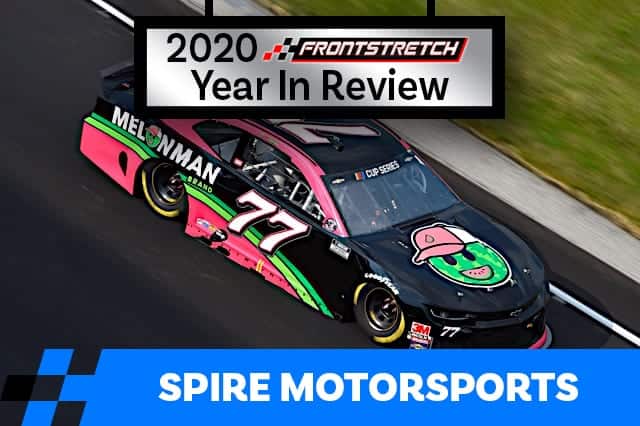 When the 2021 season kicks off at Daytona International Speedway in February, Spire Motorsports will be entering its third full-time season as a team in NASCAR. Yes, you heard that right.

Their first two years in the NASCAR atmosphere have been interesting, to say the very least.  After the unfortunate collapse of former championship-winning team Furniture Row Racing, Spire Sports & Entertainment bought the old No. 78 charter and soon morphed the operation into its own race team. Due to the purchase of the charter, it gave Spire Motorsports a locked-in spot for every race.

In 2019, Spire was mostly known for a big moment under gloomy Florida skies, as Justin Haley, in just his third career start, stunned the NASCAR world and stole the win at Daytona International Speedway by staying out on the track when lightning forced the race to an early end.

But the team scored only two more top-30 finishes after that point and finished 36th in the final owner standings, more indicative of what was a mostly underwhelming maiden season with its roster of drivers in the No. 77.

So understandably, the goals for 2020 were set higher: better speed, better consistency and better finishes.

It started off strong; Ross Chastain drove Spire’s No. 77 in the Daytona 500, finishing 25th after being involved in a multi-car crash with just two laps to go while racing inside the top 10.

The team utilized another variety of drivers for 2020 in addition to Chastain, with Reed Sorenson, JJ Yeley, Garrett Smithley, Josh Bilicki, BJ McLeod, series newcomer James Davison, Stanton Barrett and Haley filling out the season. Sorenson made the most starts out of this group with 12, although he only had a best finish of 29th, which came at Darlington Raceway in May.

Once again, it was Haley who was a part of Spire’s two biggest moments during the 2020 season.

Thanks to his upset win at Daytona in 2019, the win granted he and the team a spot in the All-Star Race at Bristol Motor Speedway in July. Haley drew the fourth starting position and managed to complete all 140 laps and finish 14th, beating out many of the series’ superstars.

Then came October, when the YellaWood 500 took place at Talladega Superspeedway. Lost in the midst of the last-lap penalties and wrecks was the No. 77 of Haley, who minded his own business and quietly took home 11th, giving Spire its best finish of the 2020 season.

This result by Haley at Talladega was part of three top-20 finishes the team recorded, joining Chastain’s finishes of 17th at Indianapolis Motor Speedway and 16th at Daytona in August. The total of top-30 finishes for Spire jumped from seven in 2019 to 13 in 2020. The team also finished 34th in the final owner standings, moving up two positions from 36th in 2019.

With Leavine Family Racing going up for sale at the end of the year, Spire used this as an opportunity to expand its fleet, purchasing the assets of Leavine’s old No. 95 team, which also had a charter, meaning both of Spire’s cars will be locked into each race in 2021.

On Nov. 30, it was announced that Corey LaJoie was signed to be the primary driver of Spire’s No. 7 car in a multi-year deal. As of now, no driver confirmations have been made for their No. 77 car, although it’s projected to be a multi-driver lineup.

The hiring of LaJoie, plus its expansion to a two-car stable, can at least give Spire a few things to hold their heads high on during this offseason. But in the long run, it still has a tall hill to climb. The team has only six lead-lap finishes in its 72-race tenure. Considering its level of lackluster performances with just one car in their stable, it’ll be interesting to see how it fares with two full-time cars. If LaJoie and the Spire team can find a good level of chemistry between each other, perhaps its constant finishes of 25th or worse could be a thing of the past.

Still not sure how Spire has a Charter from the 78 purchase, a charter from the 95 purchase, has leased one to the 99 team and still has 2 charters. Anybody know where the mystery third charter came from?

Jayski, on the charter page, speculates that it is the #37 charter, which was thought to be owned by JTG-D but may actually be owned by Todd Braun. It was originally the Premium #62 charter, which was leased to HScott for the #46 for a year, sold to Furniture Row for the #77, then sold again when they cut back to one car. The news reports were that JTG-D bought it but perhaps it was in partnership with Braun with Braun controlling it. There is also the third Front Row charter out there. Rick Ware leased it last year for the #53. Front Row has said for years it wanted to expand back to three cars, but that hasn’t happened and there are limits on leasing out charters, though the rules are not entirely clear with respect to whether everything gets reset if and when the charter system gets renewed. There were also reports that they may cut back to one car, which would make a charter available, though more recently, there was a report of their being connected to Anthony Alfredo. If they also retain Michael McDowell, that still leaves one charter that could be sold.