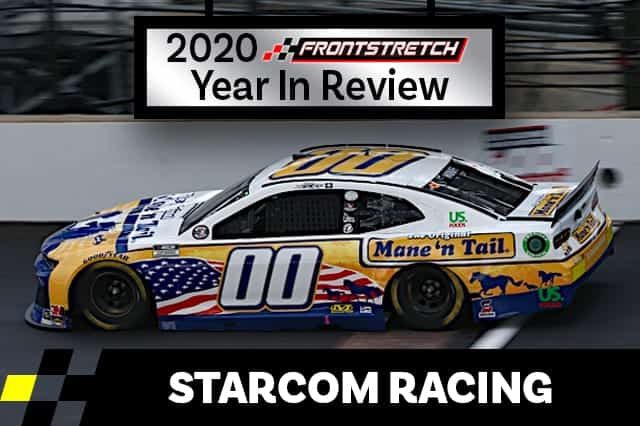 Prior to the start of the season, 2020 looked to have been a year of change, progression and optimism for the fledging StarCom Racing in the NASCAR Cup Series.

Instead, it was filled with controversy, disappointment and poor decisions.

The single-car organization cleaned house at the end of 2019, parting ways with veteran driver Landon Cassill in favor of largely untested rookie Quin Houff, who signed a two-year contract with the team.

With only 17 Cup starts under his belt prior to the season, Houff’s inexperience was glaring. And sure enough, in 2020 the 23-year-old finished 33rd in the final points standings, worst among full-time drivers. To add insult to injury, Houff’s 31.33 average finishing position was the team’s worst in three seasons of full-time competition.

StarCom’s performance also drew the ire of several competitors, culminating with a contentious incident at Texas Motor Speedway in June.

Low on fuel, Houff made a sudden ill-fated dive to pit road across several lanes of traffic.

What ensued was carnage as Houff’s brightly colored No. 00 Chevrolet collided with the much faster cars of Christopher Bell and Matt DiBenedetto. The incident ended the rookie’s day in a heap of crumpled sheet metal.

NASCAR’s Senior VP of Competition Scott Miller even commented on Houff’s move, saying, “nobody could argue that it was a very poor decision.” Subsequently, Houff was summoned to a meeting with NASCAR to discuss the incident.

At the season-opening Daytona 500 back in February, another poor decision put Houff behind the wall. Just 89 laps into the season, Houff attempted to pull in front of a much faster draft of cars led by Aric Almirola but badly underestimated his timing. Almirola’s Ford turned the No. 00 directly into the wall, collecting BJ McLeod as an innocent victim of Houff’s misjudgment.

Houff did manage to turn things around after the Texas incident. In the first 18 events of the season, StarCom was sidelined by five DNFs, four of which were crash-related. The final 18 races were fairly problem-free until the season finale at Phoenix Raceway, when a handling problem sidelined its Chevrolet.

During that streak, Houff posted a career-best finish of 13th at Talladega Superspeedway in October. It was his only top 20 and lead-lap finish of the entire season.

One might posit that the abandonment of practice and qualifying five races into the season was a thorn in Houff’s side, contributing to some of the poor performances. As he got more laps as the season progressed, perhaps the young team and driver gained confidence along the way.

Still, along with the Talladega result, Houff only scored 10 finishes inside the top 30.

Before we continue to poke and prod the team’s record, it is imperative to realize that 2020 was not far off of its level of performance in the past. Houff’s 2020 average finishing position was two positions behind its mark with Cassill in 2019. The DNF count was just one more than in 2019.

Yes, it was a shaky year with a rookie driver, but it wasn’t a complete change of scenery despite contrary belief. For a small team that is not even four years old, 2020 was a building year and it is behind them.

Houff will return to the organization for a second year in 2021. The Virginian should benefit from a relatively unchanged program headlined by George Church, who will stay in the same role as the StarCom’s crew chief.

Before going to cup, had Quin Houff even run a major touring series race? I’d never heard of him before that point so likely if he had it wasn’t much and I’m not sure he should have even been approved to run the cup series without some truck, xfinity or at least ARCA experience and I mean more than just a couple races. I’m sure he was what the team could afford but there has to be limits. You need to get experience with the speeds, drafting, closing rates, pit stops and all that before running the top class. I’m not bad mouthing him, maybe he’s better than he appears but his lack of experience is showing and if that stuff keeps happening he’s never going to get a better opportunity. Running very underfunded equipment plus having very little experience is a recipe for disaster.

Quin has fewer credentials than most attempting to run in Cup. There also appears to no longer be any etique taught to new drivers about where to be when being lapped. Hoeff is one of a half dozen that, charitably, need more seasoning. Setting a standard may be a wise idea.

He is a young driver with very little experience. Having practice cut out certainly does not help but he seems to be a polite young man that does learn from his mistakes and I wish him well in the up coming year.

Quin seemed like he came along quite a bit, in my opinion. Would I have preferred Landon Cassill to be on the grid? Yes. But, Quin learned a lot and will be better this season. I wish I could say with confidence Landon will be on the grid, but I suspect Spire will team with The Money Team and that they will tab Ty Dillon. With Anthony Alfredo likely to go to FRM, that’d only leave GBR and maybe MBM as options. With Timmy going for the Xfinity points, maybe MBM runs someone else full-time in Cup and Timmy on partial Cup schedule. Landon could get them in and has worked with Mike Hillman before. I doubt GBR even runs Daytona. With Beard running Gragson and Kaulig running Haley and GoFAS likely to run Austin Cindric, the odds of making the race are low. I suspect TBR won’t run Daytona, either, and are likely to run a driver connected to RWR or Spire (Gray Gaulding, Reed Sorenson, etc.) any race they are at. Odds are better MBM runs two cars at Daytona than GBR or TBR run there, in my opinion.