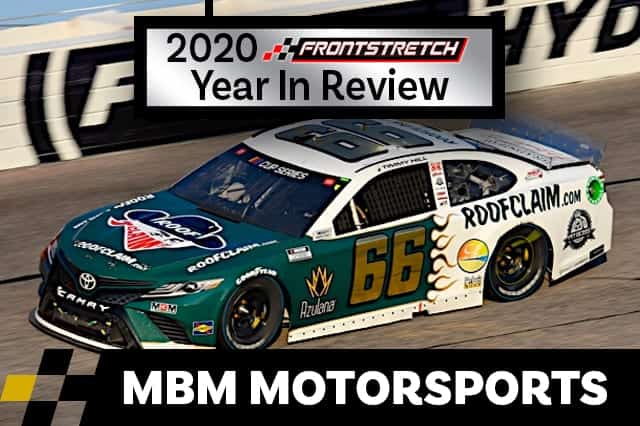 Like so many other small businesses across the country, 2020 proved to be a tale of survival for Carl Long‘s MBM Motorsports in the NASCAR Cup Series.

MBM has to rely upon whatever purse money and sponsorship dollars they can drum up to help get them to the track. As an open team with no charter income, the challenge to even show up is formidable, which is even further compounded by a devastating global pandemic

Unbelievably, they found their way.

MBM’s longtime driver Timmy Hill was behind the wheel of its flagship No. 66 Toyota (although it was a Ford in the Daytona 500 and Yellawood 500) in all 36 events on the Cup schedule. It was its first full Cup season ever, having run part time the three seasons prior.

MBM, however, did the unthinkable and won a race… albeit virtually.

OK, maybe it didn’t count, but Hill did provide MBM some valued TV time after winning at the virtual Texas Motor Speedway during the iRacing Pro Series Invitational as NASCAR was coming to grips with the COVID-19 pandemic during its seven-week hiatus.

Back on the actual track, though, COVID-19 would wreak havoc on the already-cash-strapped team. Long even had to lay off its entire workforce in the midst of NASCAR’s break. However, prior to the pandemic, Hill raced his way into the most expensive race of the year: the Daytona 500. Despite crashing, his 27th-place result provided the team with a much-needed financial boost to get through the season, especially with the yet-to-be-realized onset of the health crisis.

More help came as MBM signed its first major sponsorship backer of its magnitude in team history just prior to the start of the season. Roofclaim.com appeared on the No. 66 in the primary sponsor role 19 times. The pivotal relationship extended to MBM’s Xfinity Series efforts and even Hill’s own Camping World Truck Series team.

The added cash flow allowed Long to scrap together a second entry in select events. After DNQing for the Daytona 500, Chad Finchum piloted the No. 49 in three events late in the season but only scored a best finish of 35th at Texas Motor Speedway.

Hill delivered some glimmers of success back in the full-time entry. For small independent teams, top-20 results are astounding efforts. Hill collected two. A one-race partnership with Go FAS Racing at Talladega Superspeedway in October saw Hill cross the stripe 15th, its best finish of the season. Hill actually led a lap under caution, marking the first time ever an MBM entry was the leader of a Cup event.

Several months prior, the No. 66 came home 19th and on the lead lap at Bristol Motor Speedway, beating the likes of heavyweights Martin Truex Jr, Joey Logano and eventual 2020 champion Chase Elliott.

It even scored stage points for the first time at the Charlotte Motor Speedway ROVAL when Hill and crew chief Clinton Cram used tire strategy on a damp race track to earn the fifth spot at the green checkered flag. Although Hill ran for points in the Truck Series, his fifth did count for owner points. Like so many other things in 2020 for MBM, it was a first for the team.

The reliability problems struck once again, though, as engine problems left them last on the grid in the event, a common theme for the team.

As the team looks toward the future, the uphill battle for Long does not seem to have an end in sight. Due to a realignment within the Race Team Alliance, the annual much-needed payout to non-chartered teams that totals roughly $750,000 has been scrapped for the 2021 season.

The massive financial loss means there is plenty of uncertainty for MBM’s Cup efforts going forward. Long has announced that he plans to enter two cars for Hill and Finchum in the Daytona 500. Beyond that, its 2021 plans remain unknown.

All things considered, it is quite miraculous that MBM continues to turn laps, but the daunting challenge to survive in big-league auto racing still remains.

Sounds like MBM us running Timmy Hill full-time in Xfinity this season, perhaps trying to compete with Brandon Brown and the like. If that prevents Timmy from running full-time in Cup, it’d be great so see Landon Cassill pilot a full-time effort for MBM in Cup. It’d number a second car 13 in Cup if I were MBM, now that Germain is gone. I hope MBM can avoid dropping to part-time in Cup with Hill. Disappointed to read money for non-charter teams was taken away.

They are running 2 cars in the 2021 Daytona 500 with Chad Finchum and Timmy Hill and running Fords.