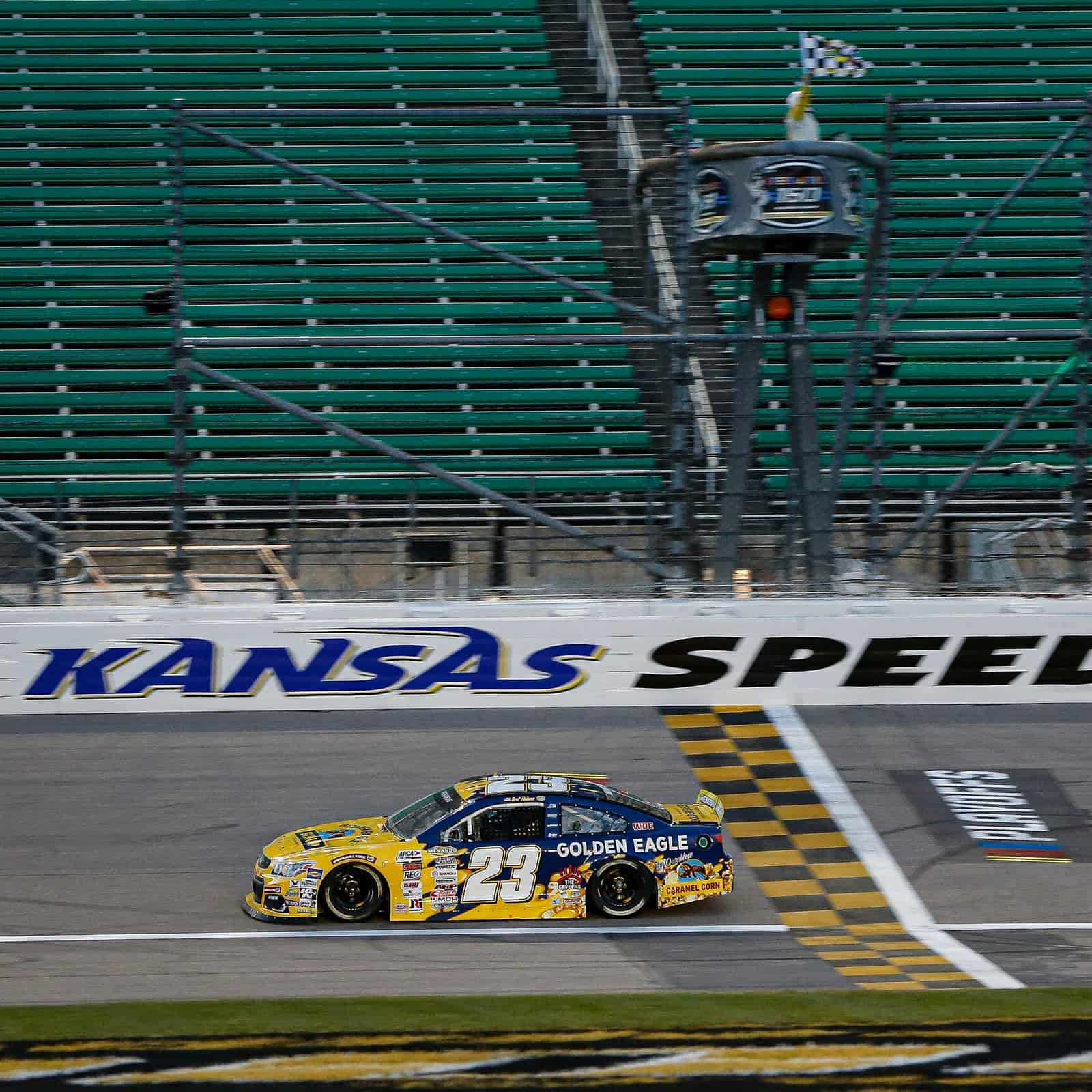 Bret Holmes, driver of the #23 Golden Eagle Syrup Chevrolet wins the 2020 series championship during the Speediatrics 150 for the ARCA Menards Series at Kansas Speedway on Friday, October 16, 2020. (Barry Cantrell/ARCA Racing)

For the 13th straight year, the ARCA Menards Series crowned a different champion.

In its first year under NASCAR management, what were the premier storylines for ARCA in 2020? Moreover, what stood out from this season, which too was impacted by COVID-19?

Despite the COVID-19 pandemic, ARCA completed all 20 races, ending with its season finale at Kansas Speedway. To contest all 20 races required series officials to reshuffle its schedule.

Of all the schedule changes, Toledo Speedway, owned by ARCA President Ron Drager, hosted three races after only being slated to host the ARCA Menards Series East. Sam Mayer was perfect there, winning all three races.

ARCA retained its schedule diversity even after it realigned some races. Kentucky Speedway joined the schedule, Kansas Speedway hosted the series twice, and the Daytona International Speedway road course replaced Watkins Glen International as the road course race. The series also traveled to 0.375-mile short track Lebanon I-44 Speedway, the shortest track on the schedule.

Although one of the series’ dirt races moved to Winchester Speedway, ARCA drivers still got dirty at the Illinois State Fairgrounds.

This year also marked the first year of the ARCA Menards Series Sioux Chief Showdown. The 10-race championship consisted of races within the main ARCA schedule. Those tracks largely consisted of short tracks. It allowed ARCA West and East drivers to compete for an additional title, especially benefiting those drivers under age 18 who cannot compete at the larger tracks. The Showdown schedule was also altered, but all 10 races were contested.

ARCA Showdown Rundown: Where We Stand After the Finale at Memphis

For much of its season, ARCA races fielded low car counts. Eleven of the 20 races had less than 20 drivers compete; the season opener at Daytona was the only race to have more than 30 drivers race.

ARCA soldiered on despite only four drivers – Deegan, Dollar, Holmes and Self – compete in every race. Eleven different teams competed in every race and the No. 18 Joe Gibbs Racing team won the owners’ championship. Moreover, 12 drivers competed in at least 10 races (half the season). So while the series did not reach its desired field size, there were consistent competitors.

Despite the low car counts at some races, such as only 14 drivers at the races at I-44 and Winchester, there was some parity among the contenders.

Dollar, Holmes, Mayer, Ryan Unzicker and Corey Heim all visited victory lane for the first time in their ARCA careers. ROTY Deegan failed to win in her lone full-time season, but she earned a promotion to the NASCAR Camping World Truck Series nonetheless.

Fourteen different drivers led laps this ARCA season. Despite not leading any laps, Taylor Gray, Thad Moffitt, Jesse Love, Ryan Repko and Derek Griffith notched at least two top-five finishes. Some of the ARCA races this year were combination races with the East Series, so those races bolstered the field size, thereby creating some exciting racing.

Still, there were races where one driver simply vanquished the field. Gibbs led 199 of the 200 laps at Winchester and Unzicker led 102 of the 103 laps at Illinois. Half of the races this year only had two or fewer lead changes, not exactly the recipe for fans feeling on the edge of their seats.

The Bush’s Beans 200 featured the most lead changes this ARCA season (nine). It had the second-largest field, with 26 drivers competing at the 0.533-mile short track in Bristol, Tenn. It was a combination race for ARCA and East.

After winning his first career Truck race earlier that night, Mayer wheeled his No. 21 to lead 116 of the 200 laps to win both races at Bristol. Mayer won by 2.572 seconds over Gibbs, who led 53 laps. In his fifth career ARCA start, Max McLaughlin led 19 laps en route to a career-best third-place finish.

Full-time East driver Mason Diaz was the highest finishing Venturini Motorsports driver in fourth, finishing one spot ahead of his numeric teammate Self, both drivers racing a No. 25 Toyota.

Only nine drivers finished on the lead lap, but 18 drivers finished the race, and expected contender Smith never even featured into the mix as his race ended prematurely due to a broken sway bar.

Imagine being 17 years old and knowing your plans for 2022. Mayer is fortunate to have a ride for 2021 and 2022; he will compete part-time for JR Motorsports in the NASCAR Xfinity Series in 2021 once he turns 18 before driving full time for team owner Dale Earnhardt Jr. in that series the following year.

Mayer burst forth onto the map this year with five wins, 12 top fives and 12 top-10 finishes in 13 ARCA starts. He ultimately finished seventh in the championship standings. He also won the East title for the second straight year and won the West season opener. In addition to winning three times at Toledo and Bristol, Mayer led the final 46 laps to win at I-44.

Mayer’s superb ARCA season netted him the Showdown title. Interestingly, he bested Gibbs for that title as well as the East title. It is no surprise those two were in contention – Gibbs led ARCA with six wins and Mayer was second with five wins.

Before this season began, Holmes planned on competing part time for his family-owned team, chasing victories rather than a title. Holmes’ plans changed, he nabbed his first career win at Kansas and captured the ARCA championship.

Consider this: Holmes completed all but five laps this season. He parked his car at Phoenix with four laps to go due to a communication error. At that time, he did not plan on running for points. Holmes also finished one lap down at Lucas Oil Raceway and still managed a seventh-place finish, one position ahead of fellow championship challenger Self.

The champions of all three NASCAR series won the respective Championship 4 races to win the title. Holmes only won once, but he finished in the top 10 in 19 of the 20 races this year, finished runner-up four other times and led the third-most laps behind only Mayer and Gibbs.

Holmes has not revealed his plans for 2021 yet. He has been rumored to compete in both the Truck Series and ARCA again, possibly both part-time efforts. This year, though, he was the model of consistency en route to winning the 2020 ARCA championship.

The disappointment of the Year: Drew Dollar

Dollar finished lowest among all full-time drivers, fourth in the championship standings. He finished 27 points behind Deegan.

Dollar won at Talladega Superspeedway, the first race back for ARCA following its hiatus due to the COVID-19 pandemic. He led 40 laps in that race.

However, he only led seven more laps this season, at Memphis International Raceway.

Unzicker, Heim and Riley Herbst all led more laps than Dollar, and combined they only competed in eight races. Dollar finished on the lead lap in only 10 races, half the season, the same amount as Taylor Gray, who competed in 12 races.

To add insult to injury, Christian Eckes piloted the No. 15 to the ARCA championship in 2019, whereas Dollar drove the No. 15 to finish on the lead lap in only half the races this year.

In two races, Dollar showed his youth. In the third Toledo race, he wrecked after 86 of 200 laps. He blamed Parker Retzlaff, a full-time East driver. Then at Bristol, Dollar retaliated by wrecking Retzlaff. However, Dollar finished that race in 18th place, 46 laps down, only besting Retzlaff by one position.

Dollar finished 10 spots behind Deegan. In their rookie battle, Deegan finished ahead of Dollar 11 times, and she overall finished better (7.3 compared to Dollar’s 8.8). Moments such as his incident at Bristol cost Dollar top rookie honors.

Forty-five days remain until the ARCA 2021 season gets underway at Daytona with the Lucas Oil 200.