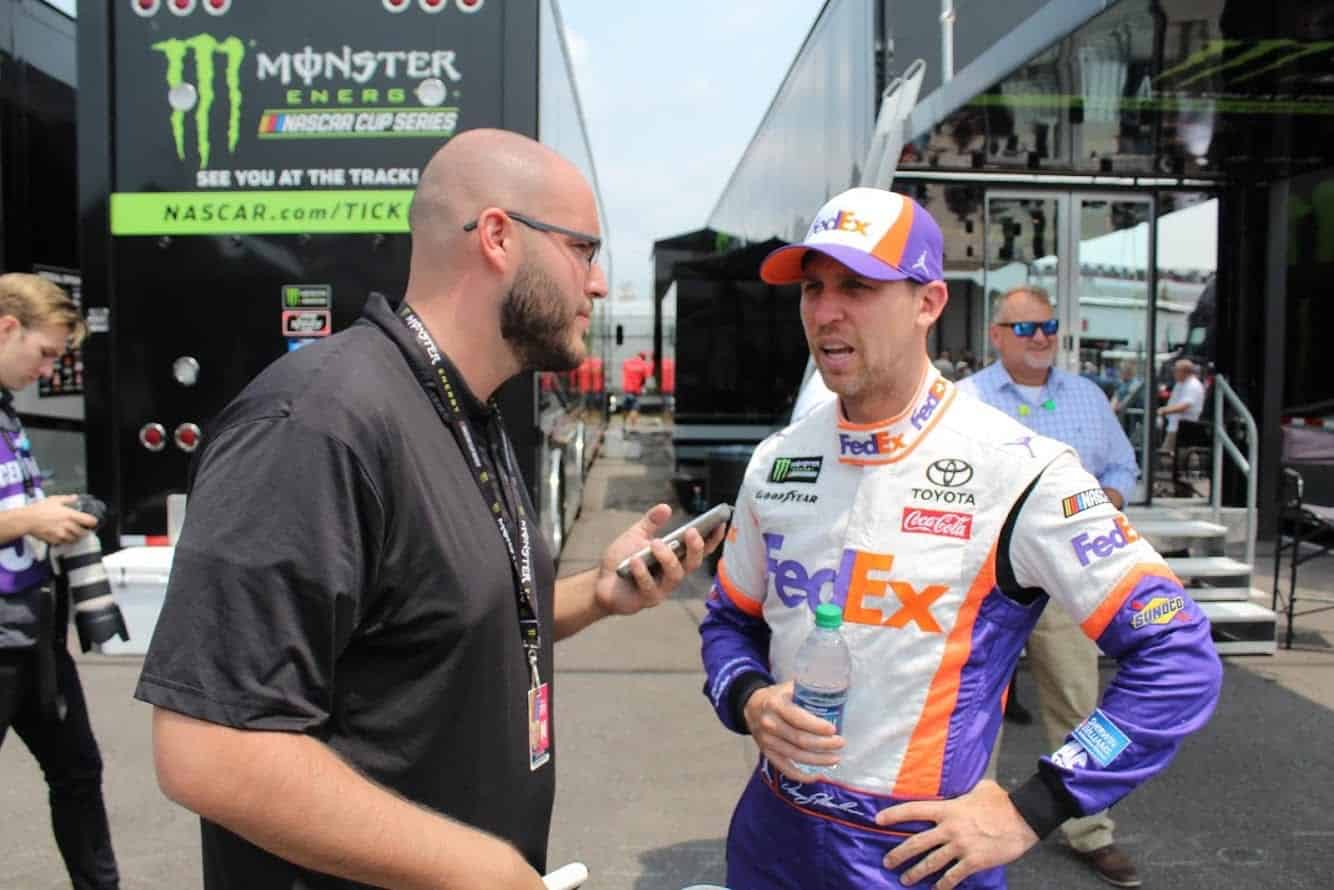 Five years, man, it can flash by in a blink of an eye.

Flashback to Daytona Speedweeks 2016: I was covering my first Great American Race on behalf of Speedway Digest, making the 18-hour drive – nearly 2,300 miles round trip — from Ithaca College (where I earned a journalism degree in 2018) to Daytona International Speedway. I was so excited, finally traveling to the place I dreamed of covering races at since I was a child.

Sure, I had covered four race weekends in 2015 (both Pocono Raceway events, Watkins Glen International and the fall race at Dover International Speedway), but this was the Daytona 500 – one of the biggest sporting events in the world.

But it was at Daytona that I met Tom Bowles, owner of Frontstretch. We discussed options of me coming on board, as Joe Wolkin previously threw my name in the hat as a viable option to be a news writer. Instantly, I began writing new pieces every Thursday for Frontstretch as well as providing content for SD.

That year I went on to cover eight race weekends and scored plenty of interviews for content, one of which was a 10-minute one-on-one with Dale Earnhardt Jr. at Pocono while covering just my seventh NASCAR Cup Series race. Talk about being nervous; my stomach was in freakin’ knots!

Throughout the year, I gained a ton of experience and learned many valuable lessons. That included going out to dinner with respected journalists such as Jim Utter, Chris Knight, Lee and Reid Spencer to pick their brains. Simply, I felt as though I needed to be at the racetrack in order to have a presence, because my rule of thumb is out of sight, out of mind. I sure as hell don’t want to be out of mind.

One of the best experiences of the year was covering championship weekend at Homestead-Miami Speedway, seeing Jimmie Johnson earn his record-tying seventh championship in a wild finish. That’s history!

Come 2017, I had a much bigger responsibility at Frontstretch, becoming a weekly editor, as well as controlling the Xfinity Series beat. There, I wanted to tell unique stories from personalities in the Xfinity Series in my weekly Eyes on Xfinity column. However, those would only scratch the surface from stories I’d eventually be able to tell from people within the series.

2017 was a fun year, traveling to 11 race weekends, including both the Daytona 500 and Homestead again. I feel like the story I wrote on Gray Gaulding and BK Racing in early August is what put me on the map from a journalism standpoint. That same week, Wolkin, Zach Catanzareti and I took over the reins of the Frontstretch Podcast, and we had no idea what we were doing: just three college kids talking about racing. That was a lot of fun, but it was more of a focal point for me in 2018 when Mike Neff came on board. Come springtime, we’d have a guest on nearly every week, using Corey LaJoie as our guinea pig.

With that, it meant a lot more time was invested into racing on a weekly basis, as well as spending my own money to get to the racetrack. It also meant I’d have to take time off from work, as I held miserable part-time jobs in order to chase my dream. It led to a lot of days and nights questioning myself because when I began chasing this dream, I was hoping to have a full-time job secure once out of college in May 2018. Boy, was that a reality check, especially after seeing other journalists lose their jobs because many outlets didn’t have an interest in covering NASCAR.

Regardless, by the middle of 2019 season I bought into Frontstretch. I felt like the website was starting to pick up some steam on the national level, as drivers from some of the bigger race teams started to take notice of our work. For whatever reason, Clint Bowyer took a liking to my work, promoting my hard work to his followers. We also signed a contract with Comcast where we would provide them content surrounding the Xfinity brand. That partnership continued into 2020.

With a strong end to 2019, the website had a ton of momentum entering the 2020 season, which kicked off by covering my fifth Daytona 500. There, I was joined by nine of my Frontstretch colleagues as we tried taking over the media center! With President Donald Trump attending the race, there was so much hype behind the 500, and it was a great race until the end, when Ryan Newman flew through the air. Thankfully, he made a full recovery.

But less than a month after Daytona, the season came to a screeching halt, as did the world. COVID-19 threw a curveball into everything, and stopped the sport for nine weeks. Unfortunately I wasn’t able to get back to the track until the end of June at Pocono, for the Cup Series’ first doubleheader. That was a looooong weekend with three races on Sunday. Thanks, Mother Nature.

Nonetheless, Frontstretch continued to have a presence at the racetrack, — though from the press box — still trying to come up with unique ways to provide content. Fortunately, I was able to attend the doubleheader weekend at Dover, the regular season finale at Daytona and championship weekend at Phoenix Raceway, my first time out West. With hard work and determination, Frontstretch was able to send me to the track in 2020 because of raising enough funds through sponsorship. Such a relief.

But it was in Phoenix where I received an email from Scott Page, director of operations at Jayski.com, asking if I wanted to come on board. This was a no-brainer; I took the deal and will start on Jan. 1. Not only will I be in control of helping format the website, but for the first time in Jayski history it will have original content, which falls solely on my shoulders. To say I’m pumped about that is a gigantic understatement.

There are too many people for me to thank, but Tom Bowles, Kevin Rutherford, Beth Lunkenheimer, Michael Massie, thank you all so incredibly much for pushing me to be my best and believing in me when sometimes I questioned the motives. You guys are the force behind the growth of the website the last few years. Keep up the hard work!

Over the years, I’ve made so many memories at Frontstretch, and it’s a company that’s going to continue being a force in the NASCAR media landscape. It’s a website that’s proven to develop younger writers, and I have no doubt will continue to do so.

And who knows, I might stop by from time to time to put out some content. I believe wholeheartedly in Frontstretch and expect a big 2021 season from y’all.

Best wishes Dustin and I have enjoyed many great articles from you. I am glad that I can continue to read your pieces as I visit both this site and Jayski everyday. Happy New Years and all the best!

Will look forward to you at Jayski!

Best of luck in the future Dustin!

Good luck.
I am looking forward to Jayski becoming more than what it has been (and it’s been fantastic).