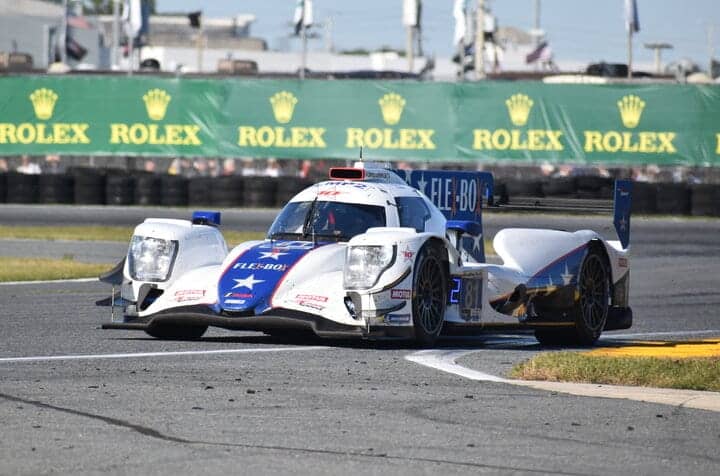 DragonSpeed announced Monday (Jan. 4) that they will in fact field two ORECA 07-Gibsons in the LMP2 in the Rolex 24 at Daytona later this month.  Eric Lux had already been announced as a driver for the team.  He’ll be joined by Devlin DeFrancesco, Christopher Mies and Fabian Schiller.

Of the three newly-announced drivers, only DeFrancesco has previous Prototype experience at Daytona.  DeFrancesco drove for JDC-Miller MotorSports in 2018 and 2019.  The 2018 race was in an ORECA 07-Gibson, where he finished sixth overall in a team that also included 2020 Xfinity Series champion Austin Cindric.  In 2019, DeFrancesco drove the team’s No. 85 Cadillac DPi-V.R. (dubbed the “Banana Boat”) and finished fifth overall.

For Mies, Daytona will be his first-ever race in an LMP2 car.  He’s excited about his new adventure.

Lets start the new year with a bang ? going back to IMSA, but this time in LMP2 class ? A new chapter in my career and I’m really looking forward to Daytona. Big thanks to Elton and my partners Montaplast, Wilhelm May for making this journey with me together ? pic.twitter.com/miAMne0NRV

Mies also brings experience at Daytona to the table.  All three of his previous starts came in the GT Daytona class for Montaplast by Land-Motorsport and they’ve all been interesting.

2017 saw Mies finish second in class in his Audi R8 LMS GT3 in the team’s first-ever IMSA start.  2018 saw the Montaplast Audi clearly show their stuff as the best team in the class.  However, IMSA didn’t like what was going on in the pits.  A stop and five-minute hold in the 10th hour due to the team refueling too quickly dropped them out of the lead and to an eventual seventh-place finish.  The 2019 race saw the Montaplast Audi run strongly again, but they ended up being classified at the rear of the class due to a drive-time issue.

Finally, Schiller will be making his second start in the Rolex 24 at Daytona.  In 2019, Schiller drove for P1 Motorsports in a Mercedes-AMG GT3, finishing 19th in class.  Previous to that, Schiller drove in what is now GT World Challenge America powered by AWS for CRP Racing.

There is one small problem with the news.  The press releases and articles all indicate that this entry will carry the No. 18, which DragonSpeed used in the 2019 race for their full-time WEC team that contested the event.  However, they’ve been beaten to it.

Well this is awkward. Might want to pick a new number, @DragonSpeedLLC. We already filed the paperwork ? pic.twitter.com/CHqLoVGcsN

As a result, the team will have to switch to another number prior to the ROAR Before the 24.  We’ll have to wait and see what the new number will be.