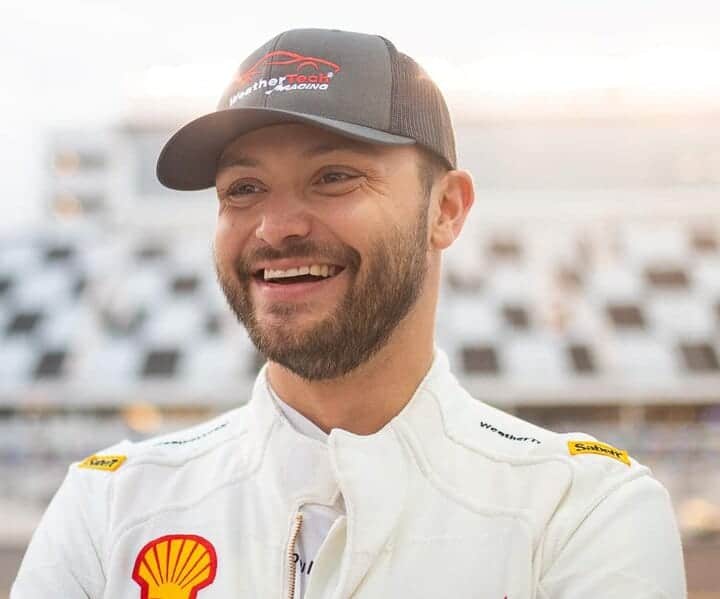 Proton Competition announced Wednesday (Jan. 6) that they will field a Porsche 911 RSR-19 full-time in the IMSA WeatherTech SportsCar Championship’s GT Le Mans class in 2021.  Cooper MacNeil (pictured above) will bring primary sponsorship from WeatherTech to the team.  He will be joined by Porsche factory drivers Gianmaria Bruni, Kevin Estre and Richard Lietz.  The team will use the No. 79.  In addition, the team plans to apply for entry into the 2021 24 Hours of Le Mans.

“We have put a lot of thought into this move,” MacNeil stated.  “I have raced against this level of competition at Le Mans twice, most recently this year, and have felt comfortable with the added performance of the car. We are going back to running a Porsche, and I am looking forward to getting behind the wheel of the 911 RSR. It will be more pressure on me as a driver, but I am welcoming the added effort it is going to take to run GTLM in 2021.”

In MacNeil’s case, he has experience racing in GT Le Mans-level equipment.  He has competed in the 24 Hours of Le Mans six times, five of those coming in the GTE-Am class.  His best finishes are a pair of thirds in 2017 and 2019.

The sole time he didn’t run in GTE-Am was in 2014.  He was supposed to race in a Porsche 911 RSR for Prospeed Motorsport (using the aforementioned No. 79) in the GTE-Am class, but co-driver Bret Curtis was ruled out of the race due to injury.  As a result, the team was forced to move up to GTE-Pro in order to race with just MacNeil and Jeroen Bleekemolen in the car (Curtis was the team’s sole bronze-rated driver, a requirement in order for a team to compete in GTE-Am).  The duo finished fifth in their Porsche.

For Proton Competition, this will be their first full-time season in IMSA.  It’s a move that owner Christian Ried has wanted to make for a while.

“We have been looking at entering the IMSA WeatherTech Championship for a few years,” Ried explained.  “We just didn’t feel like the time was right until now.  With the factory effort leaving, that left a void for Porsche in GTLM.  We were able to get together with David and Cooper [MacNeil] to keep the Porsche brand racing at the top level of GT competition in IMSA.  I am looking forward to the challenge and am excited to add IMSA to our racing schedule in 2021.”

They’ve raced the last few years full-time in both the FIA World Endurance Championship and the European Le Mans Series.  Last year, the Dempsey-Proton Racing No. 77 finished fifth in GTE-Am with Ried and Riccardo Pera driving (Matt Campbell missed the season finale in Bahrain after driving in the other seven events).  In the European Le Mans Series, the team’s No. 77 Porsche shared by Ried, Michele Beretta and Alessio Picariello won the GTE championship on the strength of two wins and two second-place finishes.  The No. 93 Porsche, which had actor Michael Fassbender as part of the team in addition to Lietz, finished fifth in points.

The press release does not indicate which of the three Porsche drivers (if any) will be MacNeil’s full-time teammate beyond Daytona.  Look for that information to be revealed at a later date.