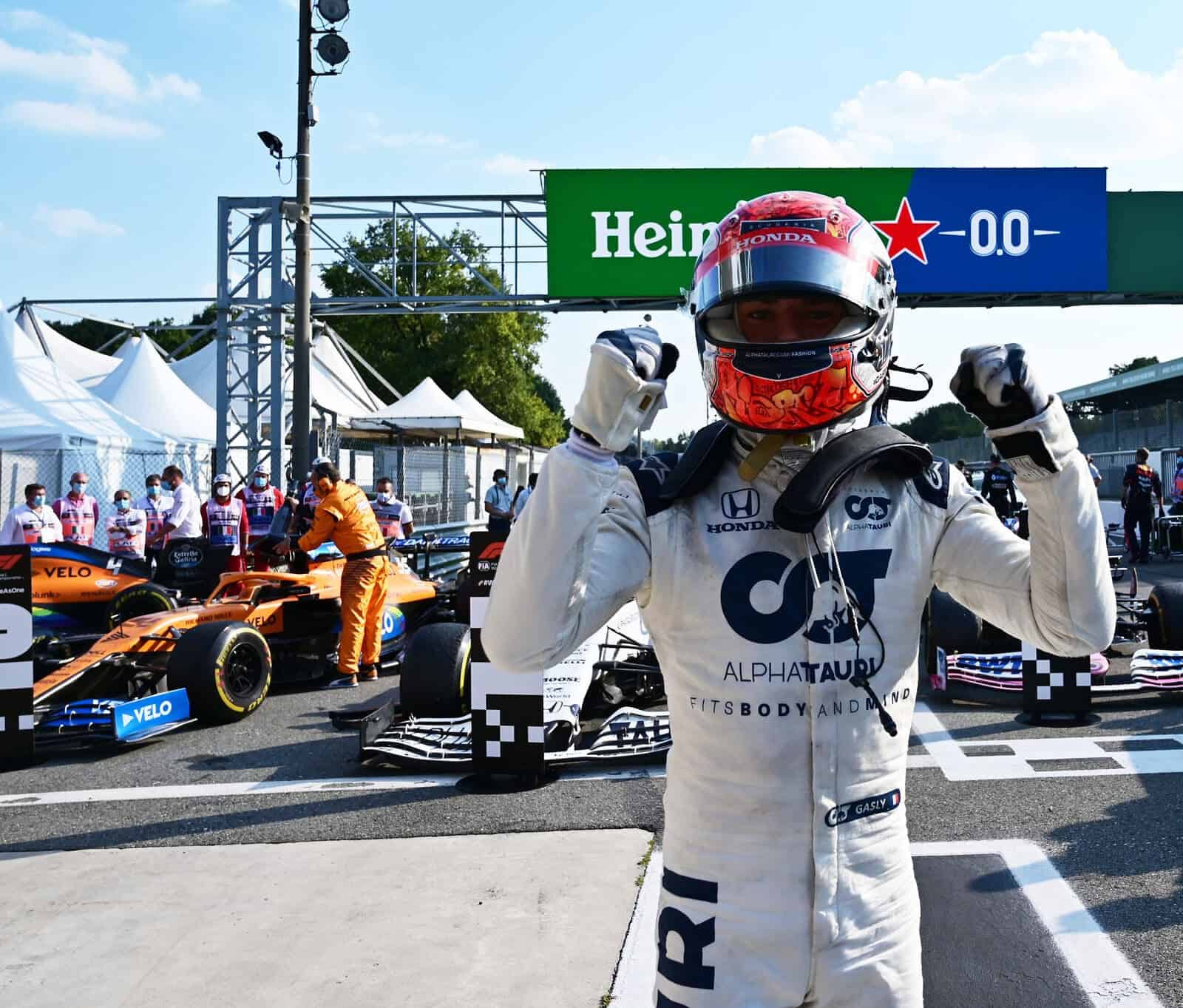 The calendar has flipped.  That’s right, 2021 now sits atop the masthead.  Whether it is bringing change or hope has yet to be determined but one thing that can be recognized is that 2020 is becoming a fading image in the rearview mirror, the silhouette of a car that was passed and continues to recede.  The open road ahead, however, allows for a moment to reflect.

The 2020 Formula 1 season was a mix of everything, much like any other sporting enterprise during the year.  The last-minute cancellation of the Australian Grand Prix set the tone for the season as management, team principals, drivers and personnel all tried to figure out how to navigate the Coronavirus pandemic.  That the series did not start until the beginning of July, close to when everyone would be nearing their summer break is almost a trifling matter.

Consider this oddity to the season: four tracks held two points-paying races at their venues – meaning that nearly half the season happened on four tracks (the schedule was comprised of 17 events).  The peculiarities of the season are too numerous to list and would read more like a comedy sketch than anything.

However, if any normalcy was to be found, Lewis Hamilton and Mercedes did their best to deliver.  Claiming his seventh drivers title, and earning his 95th win, set him at his usual lofty position while he continued laying waste to the record books.  Powering Sir Lewis Hamilton through his record-breaking season was German manufacturer which solidified itself as one of the best ever with its seventh-straight constructor’s title.

What a season!  With the offseason now idling and testing its motor for the 2021 launch – although it looks like it will be delayed – it is time to give a look back at the top moments from 2020.

The moment that earned international headlines this year, was Romain Grosjean’s spectacular accident during the Bahrain Grand Prix. Contact from Daniil Kvyat sent the Frenchman head-on and through the guardrail, the car then split in half and burst into flames. 23 agonizing seconds went by before, Grosjean emerged from the flames and jumped into the arms of the waiting medical crew.

A true testament to the modern safety advances of F1, Grosjean not only walked away with a few minor burns to his hands and feet but most importantly his life. The recently implemented Halo device is credited with splitting the barrier, keeping Grosjean from being severely injured or even killed. A crash that easily could’ve killed the Haas driver a decade ago, serves as a real wake up call to anyone who doesn’t think racers are in true danger out on the track.

Formula One fans across the world were received and overjoyed to see Grosjean emerge from the wreck, and despite not getting a proper farewell, Mercedes boss Toto Wolff announced they would look into giving Grosjean a private test so he can have one last driver before retirement.

Back in 2006, Michael Schumacher won his 91st and final career F1 grand prix at the Chinese Grand Prix. Setting a record that most F1 journalists believe to be unbreakable, but in 2020 Lewis Hamilton did the impossible. Having dominated F1 for the better part of a decade, Hamilton came into Portugal tied with Schumacher having equaled his record the previous week in Germany. The now 7-time world champion put on a clinic at the Algarve Circuit and when the checkered flag waved, history was made.

With Hamilton moving into sole possession of the all-time wins title, come seasons end and his tally currently stands at 95. Hamilton has been a generational talent since he entered the sport back in 2007, it may not seem like an if but a when Hamilton will surpass 100 career grand prix victories. A feat that will put him in the history books again, as not a single driver in F1 history has tallied 100 victories.

Also in 2020, Hamilton equaled Schumacher’s record for most world championships as well as beating his records for most points scored and most poles and is set to be knighted by Queen Elizabeth II in 2021.

Top Step of the Podium: The Sahkir Grand Prix.

Easily the most action-packed race of the 2020 season, that Sahkir Grand Prix offered more excitement in one race that most fans have seen in a whole season. Let’s break it down.

The most notable thing going into the race was that Lewis Hamilton would not be participating after contracting COVID-19, in his absence, George Russell would drive the car instead. Russell put the car on pole and lead for the first handful of laps, looking to score both just his first points but his first win. Calamity struck on the first lap when Charles Leclerc spun Sergio Perez collecting Max Verstappen in the process.

Relegating Perez back to last, the race would seem insurmountable for the Mexican. As he worked his way through the field, Russell drove away from teammate Valtteri Bottas. Russell seems poised for a win, that is until Russell’s Williams substitute driver Jack Aitken crashed causing a safety car. Mercedes would proceed to blunder in the pits, double stacking the cars, before putting the wrong tires on the wrong cars. Relegating them back down the order, Bottas didn’t recover well but Russell moved up through the field like a hot knife through butter.

As Perez grabbed the lead from the safety car chaos – yes THAT Perez who had fallen to last on lap 1 – Russel gave chase. It all came crashing down as Russell suffered a puncture, securing both Racing Point and Perez’s first career wins.

Woah, now that was a lot of action. Esteban Ocon even scored his first podium, with Russell scoring his first-ever points.

The Italian Grand Prix at Monza, looked like it would be another smooth Sunday drive to victory for Lewis Hamilton, who had earned the pole.  For the first part of the race, that is exactly how things transpired.  Hamilton bested Bottas to the front and then held station, looking like the superb driver that he is.  And then the race turned upside down.

When Kevin Magnussen’s power unit failed on lap 18 and stranded him on the track, the ensuing safety car shuffled the field.  Most notably, Hamilton pitted under the safety car condition, but before pit lane had opened and thusly earning himself a stop-and-go 10-second penalty.

Gasly and his team chose not to pit under the safety car and bounced from the midpack to the third position.  With a need to pit still in the offing, Gasly’s time up front looked to be short-lived. As the race resumed, it even looked as though Hamilton had a chance to overcome his infraction

Then came Charles Leclerc’s spin at Parabolica, where he punctured the barrier and effectively stopped the race.  Though Leclerc walked away, Ferrari looked to be a defeated team after Sebastian Vettel had already retired.  The other Italian team, AlphaTauri, sat poised to take over.

With the race red-flagged as the barriers were repaired, word came from the FIA that the stoppage could count as a pit stop and Gasly’s team used the opportunity to give him the fresh tyres he needed.  On the ensuring standing restart, Lance Stroll, positioned in second, lost grip and slid to fourth, allowing Gasly to push into second.

When Hamilton visited pit lane to serve his penalty, Gasly took over and held on from there.  The win was the first of his career and AlphaTauri’s first since 2008 when a young up-and-comer named Sebastian Vettel drove the team, then known as Toro Rosso, to victory at the Italian GP.  For Gasly, it may well be a career-defining moment.

The Turkish GP threw a lot of entertaining conditions at the drivers.  The recent paving at the track meant that it was slick and made for treacherous handling even in dry conditions.  The lack of exposure to the course also meant that there was a new challenge to the track.

The wet conditions during qualifying added to what had become an odd weekend.  The Racing Point organization set their cars up beautifully, claiming the pole and third spots while Mercedes appeared to be adrift.

What had been wet during qualifying turned into soaked at the start of the race.  Lance Stroll used the pole position to his benefit and steered his car to an astounding early advantage – only to watch it fade as his Racing Point began to struggle in the drying conditions.  But the track never really got dry.

Instead, the track evolved into a challenging mix of dry and wet and remained that way throughout.  As teams pulled their drivers in to switch to intermediate wet tyres, Hamilton stayed out and on the full wets and drove the final two thirds in the way that only a master can.

After wearing out the tread on the wets, he continued driving the tyres as if they were slicks and managed to utilize both the wet portions of the track to keep them cool while hitting the dry parts to keep pace.  By the time he crossed the line he had gapped the field to over a half a second.

With the win, Hamilton not only demonstrated his amazing talent but he also clinched his seventh title.

It may seem silly when looking back on the season now, but at one point the entire season looked to be in jeopardy.  The cancellation of the Australian GP foreshadowed a number of ensuing eliminated events: the inaugural Vietnamese, the Chinese, the Dutch, the Monaco, the Azerbaijan, the Canadian, the French, the US, the Mexican, the Singapore, the Japanese, and the Brazilian GPs.

That’s a whole mess of races that did not happen.  There’s a reason that the worldwide circus known as F1 faced incredible challenges in trying to hold any kind of championship at all, and yet it happened.  And it started on July 5th.

When the cars took to the track at the Red Bull Ring in Austria, a sense of excitement and nervousness accompanied them.  The race went off without an issue, however, and that set the trend for how much of the season might proceed.  That Bottas claimed the win to start the season, even offered a glimmer that someone might truly challenge Hamilton for the title, though that turned out to be short-lived.