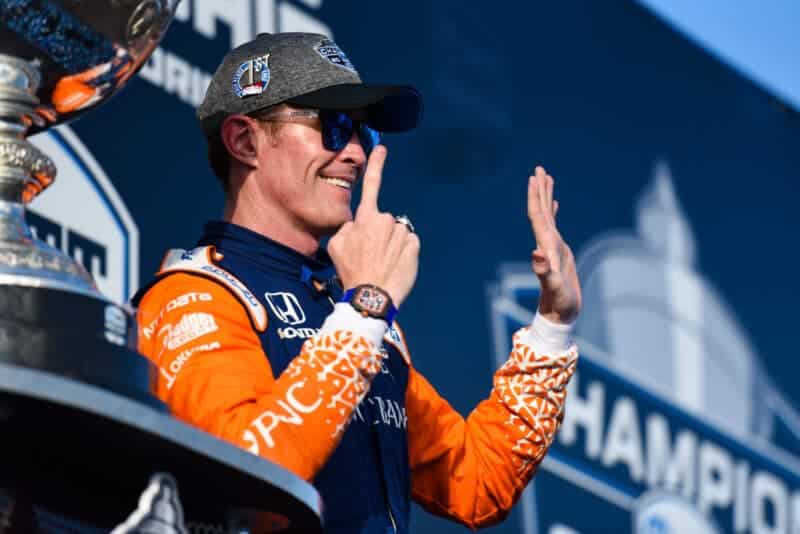 At Chip Ganassi Racing, they officially announced that six-time NTT IndyCar Series champion Scott Dixon will join the team for next week’s ROAR Before the 24 and the Rolex 24 at Daytona alongside regular drivers Kevin Magnussen and Renger van der Zande.  The team didn’t put out a full press release and only indicated on their Twitter page that the move is for Daytona.

As of this writing, none of the four Michelin Endurance Cup race weekends clash with the NTT IndyCar Series schedule.  Daytona and Sebring are before the INDYCAR season starts, Watkins Glen is on an off weekend between Road America and Mid-Ohio and Petit Le Mans at Michelin Raceway Road Atlanta is after the INDYCAR season ends.  Of course, given the current situation with COVID-19, that could change.

Dixon will be one of the most experienced drivers in the Rolex 24 at Daytona.  Even though sports car racing has never been more than a side gig for him over the years, he has competed in the last 17 consecutive Rolex 24s.  He is a three-time overall winner of the race.  The first came in 2006 for Chip Ganassi Racing in a Lexus-powered Riley Mk. XI shared with Casey Mears and the late Dan Wheldon, both of whom were full-time Ganassi drivers at the time.

In addition, they officially unveiled the scheme that their No. 01 Cadillac DPi-V.R. will be using this season.  As of now, the team will be running without a primary sponsor, but don’t be surprised if some of the team’s sponsors from other series end up on the car as associates.

At Vasser Sullivan, they confirmed Thursday that Robert Megennis has signed on to drive the team’s No. 12 Lexus in the four Michelin Endurance Cup races.  Daytona will mark Megennis’ IMSA WeatherTech SportsCar Championship debut.

Megennis’ background is in open-wheel racing.  He had worked his way up the Mazda Road to Indy ladder to run a full season of Indy Lights in 2019.  There, he won a races and had six podium finishes en route to a fifth-place finish in points.  However, the COVID-19 pandemic threw his career up in the air.  The Indy Lights season was cancelled, forcing to him to find alternate places to race.

“We watched Robert [Megennis] very closely throughout Indy Lights and at the Indy 8 Hour race,” Vasser Sullivan indicated in a release.  “After testing him at Daytona, it became clear [that] he was the right fit for our team in the No. 12 Lexus for the endurance events.  We are excited to have him as part of our driver lineup and look forward to working with him this season.”

Townsend Bell, who drove the No. 12 full-time in 2020, will rejoin the team, but only for Daytona.  The team still has one spot that has not been announced yet, the fourth driver for the No. 14.  Look for that announcement to come in the next couple of days.