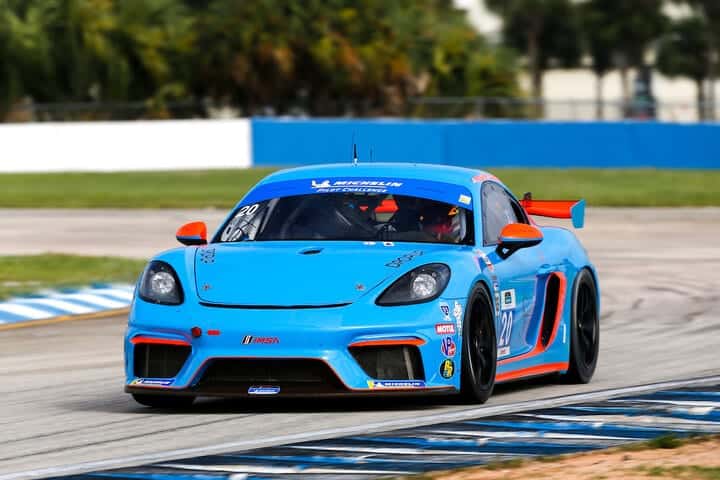 NTe Sport officially announced Friday (Jan. 15) that they will enter the Rolex 24 at Daytona in a couple of weeks with an Audi R8 LMS GT3 in the GT Daytona class.  It will be their first-ever start in the IMSA WeatherTech SportsCar Championship.

The team has revealed their driver lineup as well.  Part-time INDYCAR racer JR Hildebrand will be joined by veteran sports car racer Andrew Davis.  Don Yount and Alan Metni will complete the team.  Sponsorship will be provided by iFly, a chain of indoor skydiving centers.  Metni is the founder and Executive Chairman of the Board of iFly.

“It’s great to be able to build on our first year in the Michelin Pilot Challenge to be able to run in the GTD class this year at such an iconic event,” team owner Paul Mata said in a press release.  “The field looks incredibly stout, and this year’s race looks like it will be highly competitive.”

For Hildebrand, this will mark his IMSA WeatherTech SportsCar Championship debut.  He has only three career sports car races under his belt.  Those came way back in 2010 in the American Le Mans Series’ LMPC class for Genoa Racing.

“I can’t wait to join the guys down in Daytona and looking forward to my first Rolex 24,” Hildebrand said.  “It’s such a great way to kick off the year and I’m excited for the challenges it presents.  Over the last few years I’ve ventured outside of IndyCar more often and every time it reminds me why I love getting behind the wheel even more.  The IMSA calendar has so many of the iconic U.S. circuits on it, some of which I haven’t raced on since F2000 but still love, adding Daytona to my schedule this year is great and hopefully there’s more to come.”

Of the four drivers, Davis has by far the most sports car racing experience.  Davis has 10 career victories between the IMSA WeatherTech SportsCar Championship and the Grand-Am Rolex Sports Car Series.  He won the 2011 Rolex Sports Car Series GT championship for Brumos Racing alongside current Proving Grounds host Leh Keen.  He also has 18 career Rolex 24 at Daytona starts dating back to 2001.  His best career finish there was second in GT Daytona in 2015 while driving for Alex Job Racing.

Yount has 26 career starts in the IMSA WeatherTech SportsCar Championship.  Only eight of those 26 came in the GT Daytona class (the endurance races with Turner Motorsport in 2018 and Precision Performance Motorsports in 2019).  He has one career class victory, that coming in the 2018 Sahlen’s Six Hours at the Glen while sharing with Dillon Machavern and Markus Palttala.

Last year, Yount had an interesting Rolex 24 at Daytona weekend.  During the final practice session, Yount had a big crash in the infield, putting the Performance Tech Motorsports ORECA 07-Gibson on it’s side.

“There’s a big bump going into [turn] 6 and I think I was a little aggressive on it,” Yount told Frontstretch prior to the race.  “When I came down, I had a little steering in it, so it took me to the left [into the tires].  It’s an awful lesson to learn, especially the day before the race.

Metni will also be making his IMSA WeatherTech SportsCar Championship debut.  Metni has raced in IMSA Porsche GT3 Challenge Cup for the last four years, in addition to starts in SRO America competition.  He finished fourth in the Platinum division last year while earning his first overall victory in the second race at VIR in August.

NTe Sport is a relatively new team in IMSA that debuted just a year ago in IMSA Michelin Pilot Challenge.  Often referenced as M1 Racing LLC, the team officially debuted at Daytona, fielding a McLaren 570S GT4 for Corey Lewis and Sheena Monk, who drove the remainder of the season for Motorsports In Action.  Motorsports In Action was slow to get their plans together for the 2020 and technically sat out Daytona.  Monk and Lewis ended up finishing 18th in Daytona.

Later in the season, NTe Sport returned at Michelin Raceway Road Atlanta with Yount, Ashley Freiberg and Ryan Nash driving.  They had trouble in the Stay Frosty 240, then completely totaled their McLaren 570S GT4 when Nash had a major mechanical failure during a practice session.  They acquired the Porsche Cayman GT4 MR from Archangel Motorsports (which had just switched to Aston Martin) and ran two more races with a best finish of 14th.