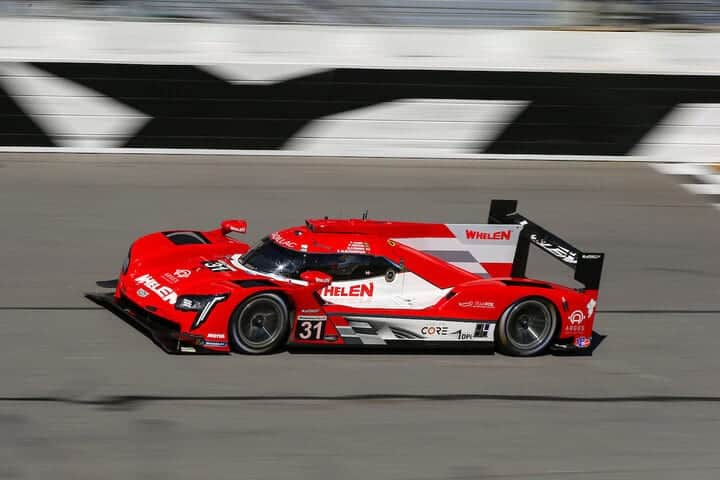 This week, teams from the IMSA WeatherTech SportsCar Championship and IMSA Michelin Pilot Challenge will test for three days ahead of the opening weekend of the 2021 IMSA season.  Between the two series, 87 cars will be in Daytona this week.  As of this writing, the official entry lists do not have drivers listed.  What will be noted here is what we already know about.

In the IMSA WeatherTech SportsCar Championship, attendance at the ROAR Before the 24 is mandatory.  As a result, the 50-car entry list will be the same 50 cars that will compete in the Rolex 24 at Daytona.  This is assuming that no one withdraws from the race, like what happened with Rick Ware Racing last year.

There will be seven DPis in the field.  Action Express Racing will be back with their full-time No. 31 and a one-off No. 48.  NASCAR Cup Series champion Chase Elliott, fresh off his first appearance at the Lucas Oil Chili Bowl Nationals presented by General Tire, will be in the No. 31 Whelen-sponsored Cadillac alongside Pipo Derani, Mike Conway and Felipe Nasr.  Meanwhile, the one-off No. 48 is headed up by Jimmie Johnson.  He’ll be joined by Kamui Kobayashi, Mike Rockenfeller and Simon Pagenaud in what amounts to an all-star car.

The LMP2 class has 10 entries, the most that the class has had since it was split off from the DPis.  Here, you’ll see Austin Dillon driving for RWR Eurasia, a joint venture between Eurasia Motorsports and Rick Ware Racing.  Dillon is joined by Cody Ware and Salih Yoluc.  The team still has not nominated their required fourth driver.  PR1 Mathiasen Motorsports is back with their ORECA 07-Gibson.  Ben Keating will be doing double-duty between this car and the TF Sport Aston Martin in the GT Daytona class.

Cetilar Racing is leaving the FIA World Endurance Championship’s LMP2 class in 2021 to focus on GT racing.  As a farewell to their Dallara P217, they have entered it in the Rolex 24 at Daytona.  It will be the first time that a regular Dallara P217 has raced in IMSA.  All previous Dallara P217s in IMSA have been used as the basis for the Cadillac DPi-V.R.  Fellow WEC teams High Class Racing and Racing Team Nederland are also entered with their ORECAs.

The new LMP3 class has seven entries.  Five of them will run the new Ligier JS P320-Nissan while the entries from Muehlner Motorsports America and Forty7 Motorsports will be Duqueine M30-D08-Nissans.  Neither of the two Duqueine teams have announced their drivers as of yet.  Pictures from Muehlner Motorsports America’s Facebook indicate that one of their drivers may by Moritz Kranz, who has raced for the team previously in SRO America and in European competition.  He can be seen here popping a wheelie at Lime Rock Park in 2018.

However, the team’s post makes it unclear as if he will drive in WeatherTech, in IMSA Prototype Challenge, or both.  We’ll find out a little more later this week.

Performance Tech Motorsports has moved down to LMP3 for 2021 with a young team.  Cameron Cassels returns for another year, joined by Rasmus Lindh, a veteran of IMSA Prototype Challenge who will be making his series debut.  Two teenagers round out the lineup in Mateo Llarena and Ayrton Ori.  Ori’s name might sound familiar if you watch the ARCA Menards Series.  Ori made his ARCA debut in last August’s General Tire 100 for Visconti Motorsports.  Ori started and finished 17th after blowing a tire early on.

For GT Le Mans, there will be six cars entered.  As of right now, only three are confirmed for the season.  Those are the two Corvette Racing C8.Rs and the WeatherTech Racing Porsche with only Cooper MacNeil confirmed for the year.  In Daytona, they’ll be joined by Risi Competizione and BMW Team RLL’s two BMW M8 GTEs.  BMW Team RLL has not named their drivers as of this writing.

GT Daytona will once again be the biggest class with 20 cars entered with a number of manufacturers.  Given the times, there are a bunch of changes.

Paul Miller Racing has the least changes as they return their full lineup from last year.  However, they gifted Action Express Racing the No. 48 for Daytona.  This weekend and next, they’ll run the No. 1 before switching back to No. 48 for Sebring.

Two-time defending GT Daytona champion Mario Farnbacher does not have a full-time ride.  He has a Daytona-only ride with the new joint venture Magnus with Archangel (a joint venture between Magnus Racing and Archangel Motorsports) alongside Andy Lally, John Potter and Spencer Pumpelly.

Porsche’s GT Le Mans team shutting down at the end of 2020 means that the team’s four full-time drivers have scattered.  Nick Tandy has replaced Oliver Gavin at Corvette Racing.  Laurens Vanthoor is now full-time for PFAFF Motorsports, which will be full-time once again.  The PFAFF organization normally runs out of the Toronto area, but the U.S.-Canada border closure made that extremely difficult (the team has a base in the United States that will allow them to run the full year).

GRT Grasser Racing Team is back with two Lamborghini Huracan GT3 EVOs.  However, neither car has a lineup announced as of yet.  Given the recent past, expect a number of factory drivers from Lamborghini such as Mirko Bortolotti.  Black Swan Racing has also entered their Porsche for a one-off appearance.

Unlike the WeatherTech SportsCar Championship, attendance at the ROAR Before the 24 is not required.  It is likely that many more teams than the 37 entered for the ROAR will be entered in the season-opening BMW Endurance Challenge at Daytona.

There are 24 cars entered from the Grand Sport class.  Of those entered, most of them are returnees from last year.  TeamTGM, which will make their WeatherTech debut, is back with their two Chevrolet Camaro GT4.Rs.  They only ran Daytona last year before withdrawing from the remainder of the season in order for team management to help with the quest to find a COVID-19 vaccine.  With two vaccines currently being distributed in the United States and a couple of others under consideration, the team felt comfortable returning to the track.

Andrew Wojteczko Autosport (AWA) is also back after missing all but the season opener in 2020 due to COVID-19.  Their reasoning was similar to PFAFF Motorsports in WeatherTech.  They’re a Canadian team and the border situation made it next to impossible to compete.  They’re back with their 2020 lineup of Orey Fidani and Kuno Wittmer.

2020 champions KohR Motorsports has entered a Ford Mustang GT4 instead of their championship-winning Aston Martin Vantage GT4 for the test.  It will see team owner Dean Martin return to the driver’s seat.

New teams include FraSun Racing, which has entered a BMW M4 GT4.  FASTMD Racing has entered an Audi R8 LMS GT4 for James Vance and Alexandre Papadopoulos, having moved up from TCR.

In TCR, there are 13 cars entered for the test.  Eight of those cars are Hyundais.  The test will mark the public debut of the new Hyundai Elantra N TCR, two of which will be fielded by Bryan Herta Autosport.

Copeland Motorsports, which ran one car part-time last year, has two Hyundai Veloster N TCRs full-time for 2021.  They’re joined by CB Motorsports (which may have a second car as early as Sebring) and Van Der Steur Racing LLC, which returned to IMSA competition at Sebring back in November for the first time since 2011 in the American Le Mans Series.

Activity at Daytona International Speedway is scheduled to start on Friday.  In addition to practice recaps, we will have a recap of qualifying Saturday and the Motul Pole Award 100, which is scheduled for Jan. 24 and will be streamed live on TrackPass and aired via tape-delay on NBCSN.

In regards to team charts, we have team charts in progress for both the IMSA WeatherTech SportsCar Championship and the IMSA Michelin Pilot Challenge.  They will be uploaded to the site in the near future, prior to the start of testing.