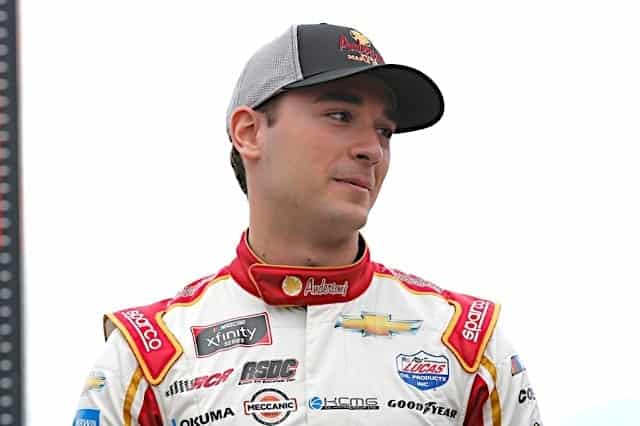 One of only two rookies set for full-time NASCAR Cup Series competition, Anthony Alfredo enters 2021 in the seat of Front Row Motorsports’ No. 38 Ford. Racing alongside 13-year veteran teammate Michael McDowell, Alfredo replaces John Hunter Nemechek, who dropped down to the Camping World Truck Series for the upcoming season.

“Fast Pasta” has part-time experience in both of NASCAR’s lower national touring divisions, and the Daytona 500 in February will mark his first points race in a Cup Series machine.

Alfredo recorded 19 NASCAR Xfinity Series starts for Richard Childress Racing during the COVID-19 impacted 2020 season, sharing the No. 21 with Myatt Snider, Kaz Grala and Earl Bamber. The part-time slate for Alfredo produced nine top-10 finishes, two top-five efforts and possibly the most spectacular crash Xfinity had all season. During a frenetic restart at Kansas Speedway in October, Alfredo was hooked and slid head on into the outside wall, where contact with Riley Herbst sent his Chevrolet rolling onto its side and, eventually, its roof.

Watch as Anthony Alfredo goes for a WILD ride and gets upside down Saturday at Kansas (he's okay). pic.twitter.com/npe97UjtRY

The car slid down the banking and ground to a halt on the apron, where Alfredo was forced to hang for a short time as crews flipped the car right-side up and extricated the driver. The violent crash didn’t seem to faze the Connecticut native, who rebounded a week later by finishing a season-best of third at Texas Motor Speedway in his final start of 2020.

Alfredo also made 13 Truck Series starts in 2019 for David Gilliland Racing (then named DGR-Crosley), finishing in the top 10 twice but suffering four DNFs throughout the season.

Be on the lookout for Alfredo to excel at mile-and-a-half ovals. In nine Xfinity starts on such tracks in 2020, Alfredo finished in the top 10 six times, including the aforementioned third-place effort at Texas and back-to-back finishes of sixth in the Kentucky Speedway doubleheader.

The only outliers of that range were a still-strong 11th-place run at Homestead-Miami Speedway’s second event and dismal finishes outside the top 20 in Texas’ first race and Kansas’ second. However, the latter two were both due to issues outside of Alfredo’s control — in each event, Alfredo scored points in both stages but suffered issues as the race wound down.

While a notoriously difficult track for any driver, Alfredo struggled at Darlington Raceway in both of the Xfinity Series’ 2020 events there, and finished a faraway 20th at the Indianapolis Motor Speedway road course. With seven such layouts on the 2021 Cup schedule, driver and team will likely focus on improving at those venues.

Front Row Motorsports, as a team, has two career wins to its name, courtesy of David Ragan‘s 2013 Talladega Superspeedway triumph and Chris Buescher‘s fog-shortened victory at Pocono Raceway in 2016. Ragan scored seven top-10 efforts for FRM at the superspeedways during his tenure with the organization, and the Front Row Fords always seem to be in the mix at both Daytona International Speedway and Talladega. Alfredo and McDowell have a solid chance at staying near the front if they work together and could take advantage of whatever carnage may arise to score some decent results.

While neither driver may be a favorite to point their way into the playoffs, the regular season finale at Daytona makes for the ultimate wild-card race; it’s entirely possible that Alfredo could score an upset with a win there.

Alfredo also has a chance to learn his way around Daytona in February, as he will compete in one of the qualifying duel races that set the lineup for the season’s biggest race. He finished 21st in his lone start at the superspeedway: last year’s summer Xfinity event.

Alfredo, similar to any rookie embarking on their debut season in Cup, could easily have a season that ends up better than expected, a total disaster or somewhere in between.

In a solid 2020 effort on the parts of both drivers, Front Row scored seven top-10 finishes overall — on the whole an improvement over their 2019 results. Nemechek’s lone season in the No. 38 yielded 16 top-20 finishes, and given Alfredo’s experience at all levels of NASCAR competition, he has the potential to perform well.

Additionally, while rookie mistakes are a hallmark of any first-timer’s season and don’t come as a shock, Alfredo’s put in the time, and his results have been constantly improving.

The best-case scenario for Alfredo will be a consistent, if quiet, season. Top-20s should be one of the goals for that team as they take on 2021, with possibly with a top-10 run at a superspeedway or a mile-and-a-half. Alfredo needs to take care of the equipment whenever possible and bring the car home on or close to the lead lap. Some laps led here and there, along with a decent-enough points finish, will make his hire one worth the venture from Front Row.

As for worst-case scenarios, things couldn’t start out much worse than with a wreck at Daytona, right? However, that’s the nature of the beast at superspeedways, and Alfredo – nor FRM – should let something like that derail their hopes for 2021. Following that up with poor performances, mechanical issues and more accidents would be cause for alarm, though. And for a rookie, that would certainly be the worst-case scenario and make for a dismal year.

An additional worst-case scenario would be to have a second consecutive year in which Alfredo ends up on his roof. He’ll certainly be hoping to keep the No. 38 on all four tires throughout the season.

While “Fast Pasta” might not have his sights set on post-race Italian dishes right now, he’s got a year of learning ahead of him. The No. 38 might not visit victory lane, but Alfredo will certainly be in the mix at wild-card events and could easily record some staunch finishes along the way. Front Row certainly picked one of the top free agents in NASCAR’s lower tiers to bring up to the Cup level, and he can prove that decision correct in 2021.