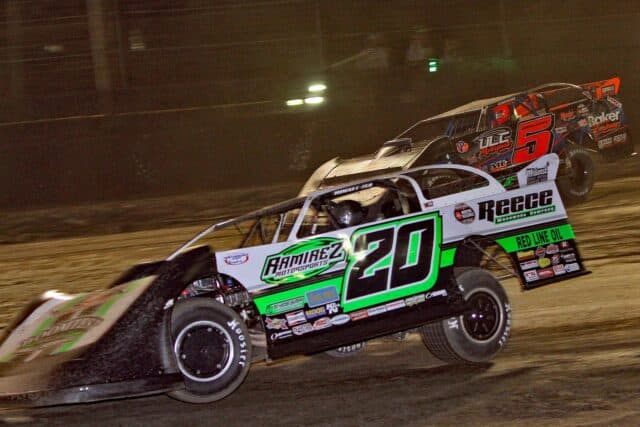 The Lucas Oil Dirt Late Models don’t kick their campaign off till tomorrow night, but three weeks into 2021 the stage has been set for a banner year for the tour. No small feat for not having taken a lap in competition.

For one, the driver roster is making waves. Take a gander at the super late model winners across the United States. 2020 series regulars Johnathan Davenport and Tyler Erb combined to win five of the six super late features contested during the Wild West Shootout in Arizona last week, with Davenport heading to the Lucas Oil opener at All-Tech Raceway with more than $50,000 in winnings banked. Defending series runner-up Tim McCreadie made noise in Chili Bowl competition, with McCreadie making a C to A climb during Monday night’s preliminaries that only Ricky Stenhouse Jr. and Jason McDougal would rival over six days of racing.

And then there’s what happened at the Sunshine Nationals, the World of Outlaws Late Model season opener that marked the de facto beginning of what has become Speedmonth in Florida. The pair of feature events at Volusia Raceway Park ended up dominated by Kyle Bronson and Kyle Strickler; Bronson finished top 10 in Lucas Oil points last year, while Strickler has already announced his intention to run the tour full-time. It didn’t matter that defending Lucas Oil champ Jimmy Owens was all but a non-factor at Volusia… there were plenty of other series regulars to run wild on the WoO’s big stage. And there’s more talent inbound:

Of course, comparing Owens’s performance at Volusia last weekend to 2020, where he won multiple super late features at the same track during Speedweeks, isn’t an apples to apples comparison to make. Because Volusia isn’t the track it was a year ago. As reported by DirtonDirt, Volusia trucked in large loads of clay to give the track a “facelift,” and as a result, it raced awful differently.

Said Owens, who was complimentary of how smooth the new Volusia surface was, noted “it’s just difficult to get around right now, especially for me.”

That the surface was difficult to do anything on was obvious to the naked eye during both Thursday and Saturday’s feature races, and not a challenge unique to Owens. Bronson did have to make a late-race pass on Cade Dillard to win Thursday’s feature, but only because he had jumped the cushion in a self-induced error on lap 22. Take that bad turn 3 away and Bronson was untouched up front. The same was seen Saturday with Strickler leading away; Ross Bailes got within a couple of car lengths at times but never seemed a threat to take the checkers.

That’s not to say the races accomplished nothing. World Racing Group Facilities Manager Larry Fink told DirtonDirt that they were pleased with the new surface, saying “it held together, which is what you want first and foremost when you put down new dirt.” And despite rain canceling Friday’s feature, the WoO now have two events on the books and contested. That’s not a small matter for World Racing Group CEO Brian Carter, who told Area Auto Racing News last week that “we’re going to race as hard and as much as we can early in the year, just in case we get stuck again in the spring and COVID slows us down.”

Those accomplishments or not, new surface or not, the Sunshine Nationals were not a stellar display of racing, especially for a venue that is as vaunted as Volusia is. I had written a few weeks prior that in scheduling a season opener in direct competition with both the Chili Bowl and a super late model program with a decade of history out west at Arizona Speedway, the WoO were throwing as a hard a punch as they could running at Volusia. That punch proved a whiff, as nothing seen on-track in Florida that weekend could hold a candle to the action out west.

And that also means opportunity for the Lucas Oil tour, which is dealing with a curveball of its own for a season opener this weekend. With Golden Isles Speedway in Georgia, the venue that for years has hosted the “Super Bowl of Racing” to kick off the Lucas tour, canceling their event in response to COVID restrictions in the area, the tour will instead be heading to All-Tech Raceway, a venue that the series has only visited once in its history.

Like Volusia, All-Tech is a half-mile oval, one of the longer venues late models will tackle in 2021. And while All-Tech’s surface isn’t new, the notebook for competitors this weekend will be thin.

This new season debut is a variable, and it has new competition; the same Arizona Speedway that put on such a stellar super late model program over the last week is debuting it’s own Wild Wing Shootout, an event that will be the unofficial season kickoff for 410 sprint car racing. The civil war between fenders and open wheel rages on eternal.

But rather than following up three nights that are often a crown jewel in late model racing, the bar has been set awful low. Even two passable races this weekend will only further the Lucas tour and its competitors at the forefront of the young 2021 late model season.

In Case You Missed It