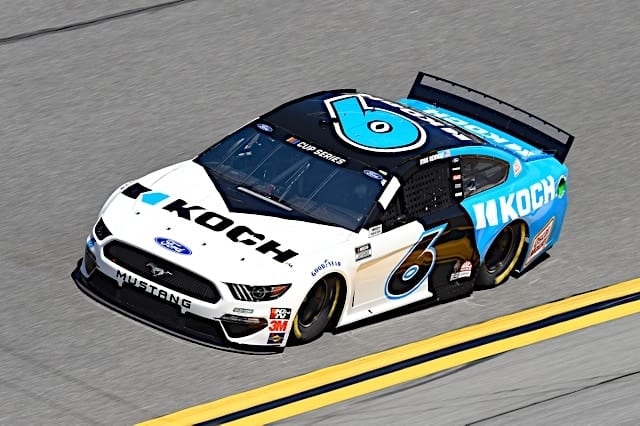 Ryan Newman returns to Roush Fenway Racing’s No. 6 Ford for his third season with the team. The 18-time NASCAR Cup Series winner will enter his 20th season of full-time racing.

Serving as the veteran voice at the team, Newman still has a reputation of being a fierce and tough competitor on track.

Newman’s 2020 unfortunately got off to a frightening start. After looking to be in position to score victory in the Daytona 500, Newman was spun after contact with Ryan Blaney coming to the line. The impact into the wall flipped Newman’s car before being slammed into at full speed by Corey LaJoie. The NASCAR world watched in stunned silence as the flaming wreckage of No. 6 slid down the track.

Due to his injuries sustained in the crash, Newman was on the sidelines for the next three races, with Ross Chastain piloting the No. 6 in his place. However, Newman was able to return to racing come Darlington Raceway following the COVID-19 shutdown, which gave him ample time to recover.

Nonetheless, he went on score far fewer top fives and top 10s than he did in 2019. Despite finishing off the rest of the year, Newman only logged two top 10s, with a season-best finish of sixth at the fall Talladega Superspeedway race. While it’s uncertain if it was the lackluster Roush cars or a lasting issue from the Daytona crash, his uncharacteristic struggles came as a surprise to many.

One major positive was the amount of new sponsors RFR was able to bring to Newman’s team. Adding sponsors Guaranteed Rate, Castrol Motor Oil, Roman, Progressive, Hy-Vee and Koch Industries to the team, the No. 6 seemed to have so many sponsors that the car was always changing its paint scheme every week.

But while the car might’ve looked good on track, the season results were average, to say the least. Come the finale at Phoenix Raceway, Newman finished the year with an average finish of 20th, a substantial drop from 2019 (14.6).

2020 showed that Newman is still fairly strong at superspeedways Talladega and Daytona, with both of his top 10s coming at the tracks. His 2019 stats also showcased his prowess on such tracks, scoring top 10s in three of the four races and being edged out by a fraction of a second for the win by Ryan Blaney at the fall Talladega race that year.

Another venue Newman could sneak one out could be the short tracks. He has nine wins coming at tracks 1 mile and under (50% of all his wins in Cup). Standout venues look to be New Hampshire Motor Speedway, Dover International Speedway and Phoenix, all locations at which Newman has won multiple times, including his most last points-paying win (Phoenix in 2017).

He has also proven himself to be quite serviceable at Sonoma Raceway, scoring a total of eight top 10s and best finish of second in 2006. With 2021 have a record number of road courses on the schedule, look for Newman to take advantage of his experience to possibly sneak out a win at Sonoma, Watkins Glen International or Road America.

Finally, Newman has also shown muscle at larger tracks like Auto Club Speedway and Michigan International Speedway. Michigan has been a kind place to Newman, as he has two wins and another eight top 10s at the 2-mile speedway. The high speeds of the track seem to suit Newman’s driving style, as even last season he was able to run comfortably just outside the top 10s.

While 2020 served a recovery year for Newman, 2021 will look to be the season he returns to his 2019 magic. He is able to drive the wheels off of anything he races, known as one of the toughest people to pass out on track.

The season will open at Newman’s redemption race, the Daytona 500. After being so close to his second 500 victory but finishing the race on fire and upside down, I can’t imagine Newman won’t race extra hard to try to score what could be a true Cinderella victory.

It’s be unlikely that Newman will make a legit run at the championship, but a top-15 or top-20 points finish is a realistic goal for the team. It’s unclear how many years Newman will have left a RFR or even in NASCAR in general, but the main goal of winning is still there. While he might not be the Newman of 2003-2008, he is still one of NASCAR’s most experienced racers. That said, they say a driver is always learning, and for Newman, being paired with teammate Chris Buescher allows him to learn just much from Buescher as he learns from Newman.

Anything can happen in NASCAR, and Jack Roush and his organization will to reignite the spark that has been missing from the team since the departure of Carl Edwards. Keep your eyes peeled on the superspeedways and short tracks, as Newman will look to make some noise and capture the magic the team once had.