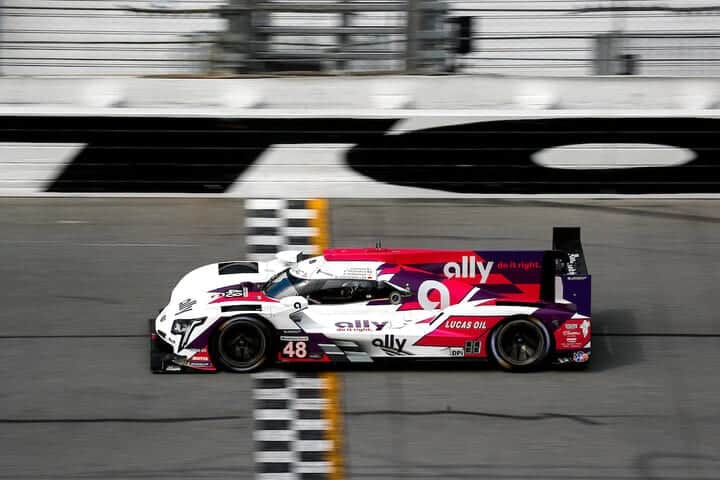 The all-star squad that Action Express Racing has assembled for Daytona has already proven to be fast.  Kamui Kobayashi was fastest overall in the first day of the ROAR Before the 24 Friday (Jan. 22) at Daytona International Speedway with a lap at 134.464 mph set during the morning session in his Ally-sponsored Cadillac DPi-V.R.

IMSA’s data indicated that it was Simon Pagenaud that turned the quick time, but it appears that there was a mix-up when Kobayashi got in the car at the start of the session.  To make a long explanation short, each driver has an ID chip for scoring purposes.  The primary purpose of the chips is to properly measure drive time, but it also helps to determine who is setting the fastest times.  When a driver gets into the car, they put their ID chip in a specific place.  Kobayashi may have put his in the wrong place.

Kobayashi’s chart-topping lap came only 12 minutes into the session on his sixth lap at speed.  It was three-eighths of a second faster than Wayne Taylor Racing’s Ricky Taylor in the quickest of the Acuras.  Felipe Nasr was third in the second Action Express Racing, followed by Renger van der Zande in the Chip Ganassi-owned No. 01 Cadillac.  Mazda Motorsports’ Jonathan Bomarito was fifth fastest.

Muehlner Motorsports America’s Laurents Hoerr was quickest in LMP3 with a lap at 123.641 mph, good for 16th overall in his Duqueine-M30-D08-Nissan.  Hoerr’s lap was eight-hundredths of a second faster than Riley Motorsports’ Scott Andrews in the best of the Ligier JS P320s.  Wayne Boyd was third fastest for Sean Creech Motorsport, while CORE autosport’s Jon Bennett was fourth.  Dylan Murry in the second Riley Motorsports entry rounded out the top five.

The pace of LMP3 and GT Le Mans cars being a match was on display in the first session of the weekend.  Risi Competizione’s James Calado ended up fastest in his Ferrari at 123.611 mph, just a couple of hundredths of a second slower than Hoerr in 17th overall.  Calado’s lap was three-eighths of a second slower than Corvette Racing’s Jordan Taylor, while BMW Team RLL’s Philipp Eng and Augusto Farfus were third and fourth, respectively.

Finally, GT Daytona saw Team Harpoint/EBM’s Christina Nielsen top the charts with a lap at 120.685 mph in her Porsche, 27th overall.  Nielsen’s lap was three-tenths of a second faster than the Ferrari of AF Corse’s Matteo Cressoni.  HTP Winward Motorsport’s Maro Engel was third fastest in his Mercedes, while Luca Stolz was fourth in a similar Mercedes from SunEnergy1 Racing.  Wright Motorsports’ Patrick Long was fifth in his Porsche.

Alegra Motorsports’ Maximilian Buhk was sixth in his Mercedes, while Ryan Briscoe was seventh fastest for Scuderia Corsa.  Recently, Briscoe was announced as a full-time competitor for Scuderia Cameron Glickenhaus in the FIA World Endurance Championship.

PFAFF Motorsports’ Zacharie Robichon was eighth fastest in his Porsche, followed by the BMW of Turner Motorsport’s Robby Foley.  Vasser Sullivan’s Jack Hawksworth was 10th fastest.  The top seven drivers were within one second of Nielsen’s time.

46 of the teams entered set times during the session.  Black Swan Racing in the GT Daytona class has withdrawn from the ROAR Before the 24 and the Rolex 24 at Daytona after team owner Tim Pappas tested positive for COVID-19 after last weekend’s Hankook 24H Dubai.  Others that did not set times were Corvette Racing’s No. 4 Corvette and GRT Grasser Racing Team’s No. 111 Lamborghini.  Racing Team Nederland’s ORECA 07-Gibson also didn’t take part in the session, but for a far different reason.

Due to delays at sea the container carrying our car arrived late and we had to miss FP1.
Working flat out to join in FP2. pic.twitter.com/iSKBntGT7r

In the afternoon session, Action Express Racing was once again fastest, but this time, it was Mike Conway in the Whelen Engineering Cadillac that was quickest with a lap at 133.188 mph.  The lap was just six-thousandths of a second faster than Meyer Shank Racing with Curb-Agajanian’s Juan Pablo Montoya, who put down his quick time in the final 10 minutes of the session.

Muehlner Motorsports America was quickest again in LMP3, this time with Moritz Kranz setting down a lap at 123.826 mph, just a little faster than Hoerr’s lap in the morning and good for 18th overall.  Kranz’s lap was nearly three-quarters of a second faster than Joao Barbosa in the Creech No. 33.  Riley Motorsports’ Oliver Askew and Murry were third and fourth, while Forty7 Motorsports’ Ryan Norman was fifth.

Finally, Scuderia Corsa’s Marcos Gomes, who won the GT Daytona class pole for the Rolex 24 at Daytona in 2019, was quickest in GTD with a lap at 120.078 (31st overall).  Gomes’ lap was one-sixth of a second faster than HTP Winward Motorsport’s Philip Ellis.  SunEnergy1 Racing’s Mikael Grenier was third, then GRT Grasser Racing Team’s Albert Costa in the fastest Lamborghini.  PFAFF Motorsports’ Matt Campbell was fifth.

AF Corse’s Simon Mann was sixth quickest, then Mirko Bortolotti in the No. 111 Lamborghini.  Wright Motorsports’ Ryan Hardwick was eighth, while Paul Miller Racing’s Andrea Caldarelli and Turner Motorsport’s Aidan Read rounded out the top 10.  The top 13 teams in class were within a second of Gomes’ pace.

For Hendrick Motorsports fans, Jimmie Johnson and Chase Elliott got a significant number of laps on track Friday.  Elliott completed 27 laps between the two sessions.  His final lap of day was his fastest at 130.755 mph.  Johnson only ran 12 laps in the afternoon and had the fastest lap for the No. 48 in the session, 132.041 mph, which was seventh overall.

IMSA WeatherTech SportsCar Championship teams will be back on the track for two more practice sessions, plus qualifying for Sunday’s Motul Pole Award 100.  The first session is scheduled for 10:30 a.m. Saturday morning.