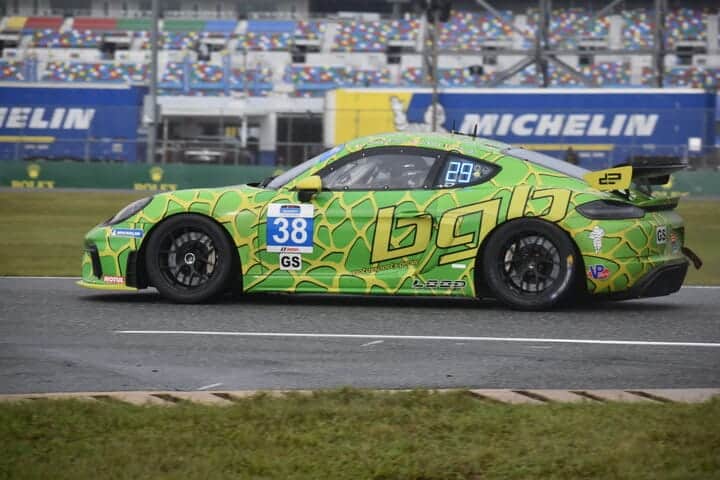 PF Racing’s James Pesek was sixth fastest in his Ford Mustang GT4, with Robby Foley in the second Turner Motorsport BMW close behind in seventh.  Archangel Motorsports’ Alan Brynjolfsson was eighth in his Aston Martin, while CarBahn Motorsports with Peregrine Racing’s Tom Dyer was ninth in the quickest of the Audis.  HTP Winward Motorsport’s Indy Dontje was 10th.

The opening session came to an end seven minutes early when Ted Giovanis spun in turn 2 and impacted the barrier.  The TeamTGM owner was ok, but his Chevrolet Camaro GT4.R suffered front end damage in the crash.  The team would get the No. 64 Chevrolet back out on track for the afternoon session with an off-color front nose (the nose was black, while the rest of the car was blue).

Giovanis wasn’t the only one to have trouble in the opening session.  Wright Motorsports’ Ryan Hardwick spun his Porsche Cayman GT4 MR out twice during the session.  Defending Grand Sport champion Kyle Marcelli also spun his Ford Mustang as well.

In TCR, Roadshagger Racing’s Jon Morley was fastest in his Audi with a lap at 106.628 mph, good for 24th overall.  The lap was just two-hundredths of a second faster than KMW Motorsports with TMR Engineering’s Tim Lewis Jr. in the sole Alfa Romeo.  LA Honda World Racing’s Mike LaMarra was third fastest in his Honda, followed by Atlanta Speedwerks’ Ryan Eversley.  Rory van der Steur was the fastest Hyundai driver in fifth.

35 of the 37 teams present turned in laps during the session, including all 24 Grand Sport teams.  The only teams that did not set a time was Bryan Herta Autosport’s No. 33, one of the new Elantra N TCRs, and Copeland Motorsports’ No. 51 Hyundai Veloster N TCR.

In the afternoon session, Liefooghe was quickest in his BMW with a lap at 111.808 mph.  This lap was one-eighth of a second faster than Auberlen.  Motorsports In Action’s Spencer Pigot was third quickest in his McLaren, then Hardwick (after his struggles in the opening session) and Foss.

Marcelli was sixth in his Mustang, followed by Foley and the Audi of McCann Racing’s Andrew Davis.  TeamTGM’s Hugh Plumb was ninth in the No. 46 Chevrolet, while BimmerWorld Racing’s Mike Skeen was 10th.

In TCR, KMW Motorsports with TMR Engineering’s Roy Block was fastest with a lap at 106.556 mph.  Block’s lap was two-hundredths of a second faster than Morley.  Van der Steur was once again the fastest Hyundai in third, followed by VGMC Racing’s Victor Gonzalez Jr. and LaMarra.

Things weren’t all great for VGMC Racing during the session, though.  Gonzalez had a spin in turn 6 (exiting the infield) early on in the session.  That didn’t significantly hurt the team’s Honda Civic Type-R TCR.  However, a later incident for Ruben Iglesias did.  Two-thirds of the way through the session, Iglesias had an incident at the bus stop chicane that brought out a brief red flag.

Michelin Pilot Challenge teams have two more sessions Saturday to tune their equipment, both of which being scheduled for 60 minutes in length.  The first of these sessions is scheduled bright and early for 9:15 a.m.