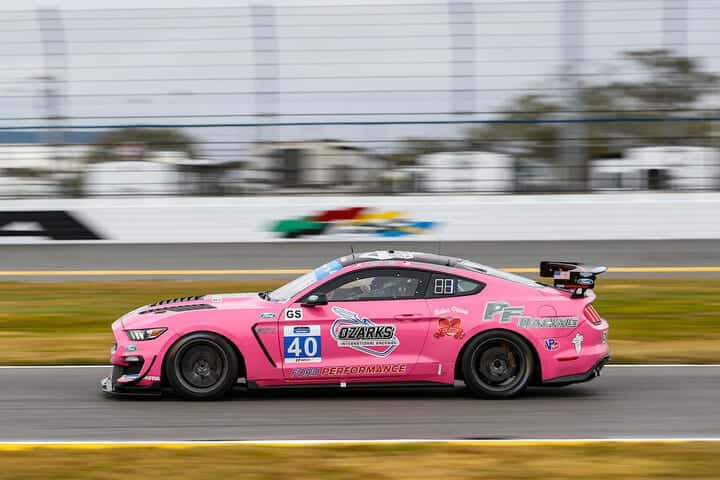 Friday night and early Saturday morning saw rain fall at Daytona International Speedway.  As a result, speeds were down significantly from Friday.  The first half of the session saw the fastest laps 10 seconds slower than Friday because the track was still drying out.

In the final 20 minutes or so, you started to see the times become more representative of what you’d expect.  Murillo Racing’s Eric Foss set the fastest lap of the session at 110.581 mph right as the checkered flag came out.

In TCR, Rory van der Steur was fastest in his Hyundai with a lap at 106.101 mph, which was just six-tenths of a second off of the fastest TCR lap from Friday.  Van der Steur’s lap was nearly a second and a half faster than the Hyundai Elantra N TCR of Bryan Herta Autosport’s Mark Wilkins.  Atlanta Speedwerks’ Ryan Eversley was third, then CB Motorsports’ Trenton Estep.  Michael Johnson was fifth in his BHA-run Hyundai.

Due to the moist track conditions, only 16 of the 37 teams on-site went on track during the 60-minute session.  Only 10 of the Grand Sport teams and 6 TCR cars went out.  Everyone else stayed in the garage to wait for drier conditions.

Given that the morning session was more or less lost due to precipitation, it was a mad dash to get out there in the afternoon.  McCumbee was fast early and often.  His first lap at speed went to the top of the chart.  The third lap of the run ended up being the fastest lap of the day.

McCumbee’s quick lap was one-seventh of a second faster than Wright Motorsports’ Jan Heylen in his Porsche.  BimmerWorld Racing’s Mike Skeen was third quickest in his BMW, followed by the McLaren of Andrew Wojteczko Autosport’s Kuno Wittmer.  A similar McLaren for Motorsports In Action’s Sheena Monk was fifth.

KMW Motorsports with TMR Engineering’s Roy Block was fastest in TCR with a lap at 106.433 mph.  Given the team’s previous results, the pace might look like a surprise, but it really isn’t.  The Alfa Romeo is said to be the fastest TCR car in a straight line.

There were no major incidents during the session.  Bryan Herta Autosport’s Taylor Hagler did have a spin late in the session in turn 2, but she was able to continue without issue.  There was also a red flag flown due to debris in the bus stop chicane.

Michelin Pilot Challenge teams have one more test session scheduled for Sunday morning at 10:35 a.m.  That session is scheduled to be 75 minutes in length.