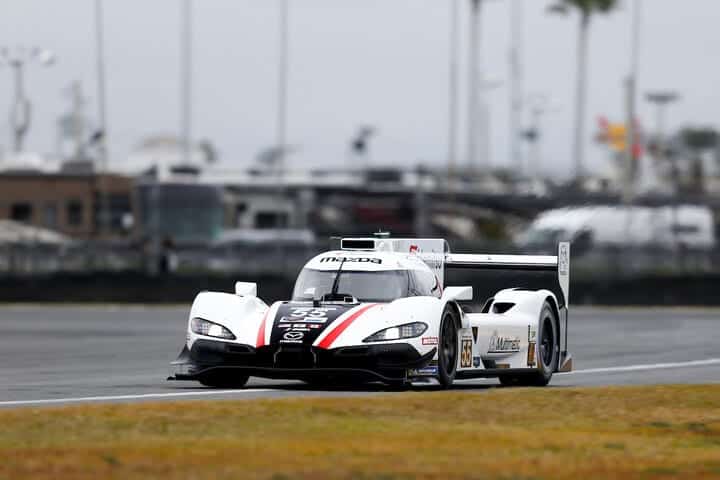 The grid for the Rolex 24 at Daytona will be set by a qualifying race this year for the first time.  The qualifying session to set that field mirrored much of the rest of the ROAR Before the 24 weekend to this point.  Action Express Racing’s Felipe Nasr turned in the fastest lap Saturday (Jan. 23) to claim what he thought was the pole for Sunday’s Motul Pole Award 100 with a lap at  135.891 mph, the fastest lap of the weekend.

That was until post-qualifying inspection.  There, IMSA officials found that Nasr’s Cadillac DPi-V.R. was underweight.  As a result, he has been moved to the rear of the DPi class.

By virtue of the penalty, Mazda Motorsports’ Oliver Jarvis has inherited the overall pole with a lap at 135.702 mph.  This lap was four-hundredths of a second faster than JDC-Miller MotorSports’ Tristan Vautier, followed by Chip Ganassi Racing’s Kevin Magnussen.  Wayne Taylor Racing’s Filipe Albuquerque would have started fourth, but his time was also disallowed due to the car’s aerodynamics being out of spec.  As a result, Meyer Shank Racing with Curb-Agajanian’s Dane Cameron will start fourth, while Jimmie Johnson will start fifth.  Nasr and Albuquerque will line up at the rear of the class.

In the LMP2, LMP3 and GT Daytona classes, rules regarding qualifying driver eligibility are in effect.  As a result, only bronze or silver-rated drivers are eligible to qualify.  Often times, this can result in slower speeds from certain teams.

Ben Keating may be bronze-rated, but he’s still a pretty quick driver.  Keating was able to turn in a lap in his Wynn’s-sponsored ORECA 07-Gibson for PR1 Mathiasen Motorsports at 131.624 mph to claim the class pole.  This lap was more than a second faster than High Class Racing’s Dennis Andersen.  Roberto Lacorte qualified third in class in his Dallara for Cetilar Racing while Tower Motorsport by Starworks’ John Farano was fourth.  RWR Eurasia’s Salih Yoluc timed in fifth, but had his time disallowed for aerodynamic violations.  As a result, WIN Autosport’s Steven Thomas will start fifth.

Fresh off of a dominant victory in the IMSA Prototype Challenge Scouts for America 145, Muehlner Motorsports America’s Moritz Kranz won the LMP3 pole with a lap at 125.176 mph, the fastest lap of the weekend.  Kranz was nearly a second and a quarter faster than Forty7 Motorsports’ Ryan Norman.  Performance Tech Motorsports’ Rasmus Lindh was third, then CORE autosport’s Jon Bennett and Sean Creech Motorsport’s Lance Willsey.

The GT portion of qualifying got off to a slow start as Alegra Motorsports’ Daniel Morad stalled his Mercedes on the apron of turn 4 of the tri-oval.  This brought out a red flag and forced IMSA to slightly lengthen the session in order for teams to get a minimum of 10 minutes of on-track time.

Once teams were able to set times, the BMWs were able to flex their muscles.  Marco Wittmann won the class pole with a lap at 124.451 mph, good for 19th overall.  Wittmann’s lap was one-third of a second faster than teammate Timo Glock.  Corvette Racing’s Alexander Sims and Jordan Taylor were third and fourth, while Risi Competizione’s Alessandro Pier Guidi was fifth in his Ferrari.

GT Daytona saw Wright Motorsports’ Ryan Hardwick claim the class pole with a lap at 119.965 mph.  Hardwick’s lap, which was the only GT Daytona lap in the 106-second bracket, was a quarter of a second faster than AF Corse’s Simon Mann.  Paul Miller Racing’s Madison Snow was third in his Lamborghini, while Russell Ward will start fourth.  The Heart of Racing’s Ian James was fifth in his Aston Martin.

Zacharie Robichon starts sixth in the PFAFF Porsche, then Rolf Ineichen, Turner Motorsport’s Robby Foley, TF Sport’s Maxwell Root and SunEnergy1 Racing’s Kenny Habul.  Habul had to make repairs after a suspension part broke during Session No. 3 in the morning.

Four teams did not set times.  One was Alegra Motorsports’ Mercedes.  Another in GT Daytona was the Team Hardpoint/EBM Porsche.  These two teams will start at the rear of the field.  The other non-qualifiers were the two Riley Motorsports Ligier JS P320-Nissans.  They will start at the rear of the LMP3 class.  Also of note, the field for the race will be in class order.  While only Kranz was faster than the two BMWs in LMP3, the whole class will start in front of the GT Le Mans cars.

The Motul Pole Award 100 is scheduled to go green at 2:05 p.m. Sunday.  The race will be streamed live on NBC Sports’ TrackPass service starting at 2 p.m.  Tape-delayed coverage of the race will start at 4:30 p.m. on NBCSN.