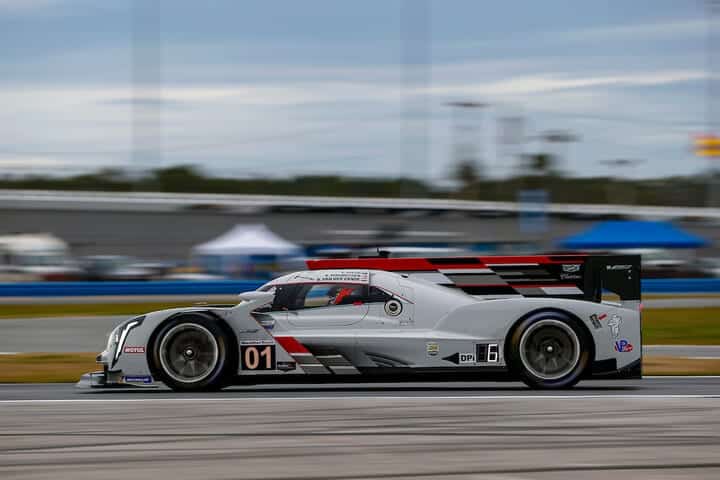 In Saturday’s ROAR Before the 24 sessions at Daytona International Speedway, Chip Ganassi Racing’s Kevin Magnussen was fastest overall with a lap at 134.323 mph in his Cadillac DPi-V.R.  Cadillacs have topped every WeatherTech on-track session for the first two days of the ROAR Before the 24.

After the early morning rain showers, the track was just about dry at the beginning of the 60-minute morning practice session

JDC-Miller MotorSports’ Tristan Vautier was fastest with a lap at 133.905 mph, set in the final minutes of the session in his Cadillac DPi-V.R.  That lap was nearly three-tenths of a second quicker than Mazda Motorsports’ Oliver Jarvis.  Action Express Racing’s Pipo Derani was third fastest in his Cadillac, with Renger van der Zande fourth after leading early.  Meyer Shank Racing with Curb-Agajanian’s AJ Allmendinger was fifth in his Acura.

LMP2 saw Racing Team Nederland continue their strong form from Friday.  Charles Milesi was fastest in class with a lap at 131.627 mph, the fastest LMP2 lap of the weekend to this point.  The lap was nearly a half-second faster than WIN Autosport’s Tristan Nunez.  PR1 Mathiasen Motorsports’ Nicolas Lapierre was third fastest, then DragonSpeed’s Rinus VeeKay and High Class Racing’s Robert Kubica.

Corvette Racing’s Nick Tandy was fastest in the GT Le Mans class with a lap at 123.866 mph, good for 18th overall.  Tandy’s lap was three-sevenths of a second faster than teammate Jordan Taylor.  BMW Team RLL’s Timo Glock was third with WeatherTech Racing’s Kevin Estre in fourth.  Marco Wittmann in the second BMW was fifth.

Colin Braun was fastest in LMP3 with a lap at 123.740 mph, slightly slower than Tandy in 19th.  That lap was one-eighth of a second faster than Riley Motorsports’ Jeroen Bleekemolen and Oliver Askew.  Kenton Koch was fourth in the Muehlner Motorsports America Duqueine-M30-D08-Nissan, while Wayne Boyd was fifth.

The Forty7 Motorsports entry ran into some problems during the session.  The car was not damaged, but both Gabby Chaves and Mark Kvamme had separate spins in the car.

AF Corse’s Daniel Serra was fastest in the GT Daytona class with a lap at 120.344 mph, 31st overall.  Serra’s lap was three-tenths of a second faster than the Porsche of PFAFF Motorsports’ Laurens Vanthoor.  GRT Grasser Racing Team’s Rolf Ineichen was third fastest in his Lamborghini, while Alegra Motorsports’ Maximilian Buhk was fourth.  Team Hardpoint/EBM’s Earl Bamber was fifth.

The session did have one red flag due to Kenny Habul stopping his SunEnergy 1-sponsored Mercedes in turn 2 with a broken right rear suspension.  The car was fixable, but the issue did end Habul’s session.

The two-hour night practice session got off to an inauspicious start.  Just a couple of minutes into the session, Era Motorsport’s Dwight Merriman crashed in turn 6 to bring out a red flag.  The team tweeted later on that they thought that there was oil on the track that caused Merriman to lose control of his ORECA 07-Gibson.  Merriman was ok, but the car was done for the session.

Era Motorsport wasn’t the only team to run into trouble here.  Wright Motorsports’ Ryan Hardwick also ran into trouble at just about the same time as Merriman.  The No. 16 Porsche ended up stalling near pit-in with damage.  Hardwick’s team was done for the session less than 10 minutes in.

Right after the session resumed, Muehlner Motorsports America’s Kenton Koch stopped in the grass at West Bend to bring out another red flag.  Koch and the No. 6 LMP3 entry that won the class pole for Sunday’s Motul Pole Award 100, did not return to the track for the rest of the session.  Koch was unable to set a time before developing his issues, the only car to fail to do so.

Magnussen’s quick time in the session came after the halfway point, but with plenty of time for others to try to beat.  Ultimately, the lap was only four-hundredths of a second faster than Action Express Racing’s Mike Conway.  Kamui Kobayashi was third in the second Action Express Cadillac, while Wayne Taylor Racing’s Filipe Albuquerque was fourth.  JDC-Miller MotorSports’ Sebastien Bourdais was fifth.

Lapierre was fastest in LMP2 with a lap at 131.989 mph, the fastest LMP2 lap of the whole weekend.  His lap was just one-tenth of a second faster than Cetilar Racing’s Antonio Fuoco in the Dallara.  DragonSpeed’s Ben Hanley was third, followed by Gabriel Aubry and Job van Uitert.  The top five LMP2 cars were separated by just over half a second.

Askew was quickest in LMP3 with a lap at 123.896 mph, good for 17th overall.  The lap was nearly a quarter of a second faster than Bleekemolen.  Boyd was third fastest, then CORE autosport’s Matt McMurry and Chaves.

Tandy was fastest once again in GT Le Mans with a lap at 123.689 mph.  This was nearly a quarter of a second faster than BMW Team RLL’s John Edwards.  Antonio Garcia was third, then Philipp Eng and Gianmaria Bruni.

Scuderia Corsa’s Marcos Gomes was fastest in GT Daytona with a lap at 120.335 mph.  Gomes was a mere three-thousandths of a second faster than GRT Grasser Racing Team’s Mirko Bortolotti in the No. 111 Lamborghini.  SunEnergy1 Racing’s Luca Stolz was third fastest, then Vanthoor and Maro Engel.  Franck Perera in the second GRT Lamborghini was sixth, with Daniel Morad in seventh after repairs were made to his Mercedes after issues in qualifying.  AF Corse’s Matteo Cressoni was eighth, while TeamTGM’s Owen Trinkler and Vasser Sullivan’s Oliver Gavin rounded out the top 10.

Sunday will see the IMSA WeatherTech SportsCar Championship teams on-track for a 20-minute warmup session in the morning.  The afternoon will see team contest the inaugural Motul Pole Award 100, a 100-minute sprint race that will set the grid for the Rolex 24 at Daytona.  The race is scheduled to go green at 2:05 p.m. and will be streamed live on NBC Sports Gold as part of the TrackPass service.  The race will air on NBCSN via tape-delay at 4:30 p.m.