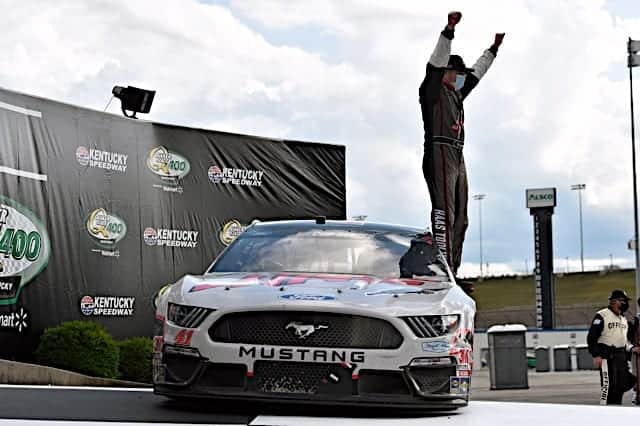 Plenty of drivers who experience success in stock car racing before reaching the top level of NASCAR have to wait a while before breaking through with that first NASCAR Cup Series victory.

Cole Custer doesn’t have to worry about that since he got that milestone out of the way early.

The very valid question awaiting the 2020 Sunoco Rookie of the Year is what he can do for an encore. Can Custer build on making the playoffs in his first Cup campaign, or is it more realistic for Stewart-Haas Racing to expect him to take a small step back before continuing the upward arc of his career?

It wasn’t a shock when Custer was announced as the driver of SHR’s No. 41 Ford prior to the 2020 NASCAR season. It was clear that the team was moving on from Daniel Suarez, and Custer had nothing left to prove at the Xfinity Series level — except for perhaps a championship, but his seven 2019 wins were arguably more impressive than a season-ending trophy anyway.

Nor was it surprising when the California native flew a bit under the radar when the races started. Custer has always been a tad overshadowed by the other members of the 2019 Xfinity Big 3, with Tyler Reddick the owner of consecutive titles and Christopher Bell widely held up as the most likely of the group to reach Cup stardom.

Yet Custer was the first of the trio to score a top-10 result, finishing ninth at Phoenix Raceway in the final race before NASCAR went on hiatus for two-plus months. The return to racing didn’t seem to favor the No. 41 team, which managed just one finish (a 12th in the Coca-Cola 600) higher than 18th over the next nine events.

As spring turned fully to summer, though, Custer heated up just like the weather. Between the Pocono Raceway doubleheader weekend in late June and the New Hampshire Motor Speedway race on Aug. 2, Custer reeled off four top 10s and two additional top-20 finishes, with just a single bad outing: a 39th at Texas Motor Speedway, when he was caught up in a wreck not of his own making.

The highlight of that strong summer run was obvious. With the laps winding down at the Quaker State 400 at Kentucky Speedway, it appeared the checkered flag would end up in the possession of one of two Cup champions (Kevin Harvick and Martin Truex Jr.) or one of its most prominent young talents (Ryan Blaney).

But thanks to an initial push from Matt DiBenedetto that left him lurking just behind the leaders, Custer held the outside line and stayed on the gas even when cars started bouncing off each other in front of him. The exciting four-wide move on the last lap turned out to be the right one, propelling Custer to an unlikely victory.

Custer’s triumph was the first by a Cup rookie running a full season in a non-rain-shortened race since Juan Pablo Montoya in 2007. Not surprisingly, it was also the apex of his 2020; though Custer recorded four more top 10s, he didn’t visit the top five again, and his initial trip the playoffs could be most precisely described as nondescript.

Still, it’s worth remembering that neither Reddick nor Bell made it to victory lane as rookies, so for now, at least, Custer is one up on his Xfnity rivals.

The bad news for Custer is that he won’t even have the opportunity to defend his race win. With Kentucky not on the 2021 schedule, the track where he should have the most mojo isn’t an option for finding a second victory.

So where else can his SHR team start looking to avoid a sophomore slump? Dover International Speedway might be a good start. Custer finished 11th and 10th there last August and has won there in the Xfinity Series, where his average finish was 5.6 over six starts.

Phoenix is another possibility. Before he ended up 28th in the 2020 season finale at Phoenix in November, Custer had finished in the top 10 in six consecutive starts there between NASCAR’s top two series. His next win in the desert will be his first, but it’s not unthinkable to imagine him contending for a win with just a small step forward in performance.

Squint a little harder and you might be able to see the No. 41 at least running near the front in the Cup Series’ rapidly proliferating road course events. Custer was a reliable top-10 road course performer before getting called up by SHR, and he came home ninth last fall at the Charlotte Motor Speedway ROVAL.

There’s arguably not another big money NASCAR team with as interesting a mix of drivers as SHR for 2021. Harvick is a good bet to leave Father Time drafting behind him for at least one more year and should once again be a championship contender. Aric Almirola is what he is at this point, a driver who can sneak in a win to make the postseason or pile up enough points to make it in relatively safely if he doesn’t. Chase Briscoe will be low man on the totem pole, attempting to make it back-to-back Rookie of the Year winners for the organization.

But while the expectations are fairly clear for all three of his teammates, it’s not as obvious what the definitions for success or failure should be for Custer. Assuming he will win another race just because he did in 2020 might set up his bosses and fans for disappointment. Cup wins are hard to come by, and until the top tier of veteran drivers like Harvick and Truex starts falling off or retires, there simply aren’t that many out there to be claimed.

On the other hand, Custer and his team shouldn’t settle for less, because he did beat some of those drivers at Kentucky and knows he can do it. That means a realistic goal is to grab another win and make it to the playoffs again, aiming to stay in the mix longer than he did the first time. If not, racing into the playoffs on points should be very possible, and only failing that should be considered less than acceptable.

Regardless, even with the shorter leash that Cup drivers seem to be on these days — as the driver Custer replaced to get his current seat would surely attest — this isn’t a do-or-die-type season. At just 22 years old and with a proven ability to win, Custer should be a fixture in the top series for years to come even if he backslides a bit in 2021.

It’s very possible that Custer is going to be forever linked with Reddick and Bell given their competitive history and simultaneous entry into the Cup Series. That’s not the worst thing in the world since rivalries are part of what fuels NASCAR, and for now, Custer can claim at least one big accomplishment the others can’t. If that’s still the case at the end of 2021, it will mean he’s still on the right track, and there’s no reason to think he doesn’t have the talent and resources to make that a reality.