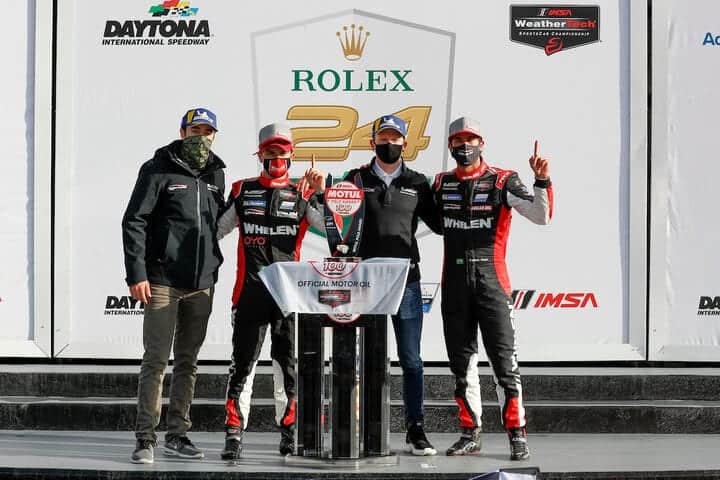 Action Express Racing’s Felipe Nasr and Pipo Derani overcame getting their qualifying time Saturday disallowed and came from the rear of the DPi class to win the Motul Pole Award 100 Sunday (Jan. 24) at Daytona International Speedway.  As a result, the No. 31 Whelen-sponsored Cadillac DPi-V.R. will start Saturday’s Rolex 24 at Daytona from the overall pole.

“It was awesome.  To be honest, I love this new format,” Nasr said after the race.  “I think it gives all the drivers and teams a feel of what it’s going to be like next week but for many more hours.  What made today a little more difficult was the weather conditions.  The rain came in a few minutes before the race start.  Nobody was expecting that.  It puts the drivers in a different awareness.”

As Nasr noted, rain showers began to fall at Daytona and soaked the track after the final Michelin Pilot Challenge ROAR session.  That forced teams to choose between wet and dry tires as IMSA did not officially declare a “change in climatic conditions.”

Mazda Motorsports’ Oliver Jarvis inherited the pole after Nasr’s time was thrown out, but he immediately came under attack.  Chip Ganassi Racing’s Kevin Magnussen was able to snatch the overall lead at the bus stop chicane on the first lap.  Once out front, the former Haas F1 driver was able to maintain the advantage.

Five laps into the race, John Farano, Dwight Merriman and Lance Willsey all spun out in turn 2.  Merriman was unable to get back underway quickly enough, forcing IMSA to put out the full course caution.  Shortly after the restart, Team Hardpoint/EBM’s Christina Nielsen had contact with GRT Grasser Racing Team’s Misha Goikhberg in the bus stop chicane.  Nielsen slid off-course and hit the tires to bring out the second caution.

This resulted in pit strategy for all five classes.  Magnussen chose to stay out on his wet tires as the track continued to dry.  Meanwhile, everyone else stopped to change to slicks.  Others waited until beyond the 30-minute mark to stop so that they could perform their mandatory driver changes.

Once the race restarted, Magnussen was effectively a sitting duck.  A lap and change after the restart, JDC-Miller MotorSports’ Tristan Vautier dispatched of Magnussen and drove away from the series debutant.  The Ganassi No. 01 would finish seventh.

Vautier had to deal with Nasr shortly after getting the lead.  The two Cadillac drivers fought for a couple of laps before Nasr was able to make the pass stick in West Bend.  From there, Nasr was able to open up a small lead on his opposition.  Derani was able to maintain that advantage right to the finish.

As a result of rule changes announced in IMSA’s State of the Series announcement in September, this race pays points as well.  By virtue of winning, Derani and Nasr will enter Saturday’s race with 35 points.  Mike Conway and Chase Elliott, who were not nominated to drive in the qualifying race, will get those points as well.

In LMP2, the conditions caused some issues right away.  PR1 Mathiasen Motorsports’ Ben Keating won the pole for the race on Saturday, but spun out exiting the infield on the pace lap after choosing to start on slicks.  While Keating was allowed to recover his spot before the green flag flew (after two failed attempts to continue), he quickly surrendered the lead to WIN Autosport’s Steven Thomas at the end of the second lap to pit.

On the restart from the first caution, Cetilar Racing’s Roberto Lacorte was able to get past Thomas and take the lead.  The Dallara P217 has struggled at times since the current LMP2 rules debuted in 2017, but the car is very good in a straight line.  Cetilar Racing was able to take advantage of that.

Ultimately, the race in class came down to a late battle between Cetilar Racing’s Antonio Fuoco and PR1 Mathiasen Motorsports’ Mikkel Jensen.  With 10 minutes to go, Jensen was able to make the move to the inside in the International Horseshoe to take the class lead.  From there, Jensen pulled away to take the win.

Fuoco would have finished second, but stopped in the final couple of laps due to an unknown issue.  He would finish sixth.  Due to the positioning of the overall winners, Keating and Jensen’s margin of victory was a full lap over High Class Racing’s Dennis Andersen and Ferdinand Habsburg (the on-track margin was 10.433 seconds at the beginning of Jensen’s final lap).  Tower Motorsport by Starworks’ Farano and Gabriel Aubry finished third, then Racing Team Nederland’s Giedo van der Garde and Frits van Eerd.  DragonSpeed’s Rob Hodes and Garret Grist were fifth.

In LMP3, Muehlner Motorsports America’s Moritz Kranz started from pole, but quickly lost his advantage to Performance Tech Motorsports’ Rasmus Lindh.  However, it quickly became apparent that reliability was going to be of the utmost in importance.

The two strongest competitors to Muehlner Motorsports America (Lindh and Cameron Cassels for Performance Tech Motorsports and Sean Creech Motorsports’ Joao Barbosa and Willsey) each had mechanical issues that put them out of the race.  That allowed Kranz and Laurents Hoerr to claim their second victory of the weekend after dominating the Prototype Challenge season opener.

Officially, Hoerr and Kranz’s margin of victory was a lap over Forty7 Motorsports’ Mark Kvamme and Ryan Norman due to the overall winner’s position (56.694 seconds at the start of Hoerr’s final lap).  CORE autosport’s Jon Bennett and George Kurtz were third.

GT Le Mans saw Corvette Racing’s Alexander Sims slip around pole sitter Marco Wittmann on the first lap of the race to take the lead.  During the event, Sims and teammate Nick Tandy were never seriously threatened.  WeatherTech Racing did use an alternate pit strategy for much of the event, but once the stops were complete, Tandy was in front and led comfortably to the checkers.

Tandy and Sims ended up 12.054 seconds ahead of teammates Jordan Taylor and Nicky Catsburg.  WeatherTech Racing’s Kevin Estre and Cooper MacNeil finished third in their Porsche, while Risi Competizione’s James Calado and Alessandro Pier Guidi finished a lap down in fourth, slowed by a spin on the warm up lane right after Calado got in the car.  Timo Glock and Philipp Eng finished fifth.

GT Daytona saw AF Corse’s Simon Mann inherit the class pole after Wright Motorsports was forced to go to a backup car following Ryan Hardwick‘s issues Saturday night.  Mann’s time at the front was very brief as GRT Grasser Racing Team’s Rolf Ineichen was able to snatch the lead away on the first lap.  A flat left rear tire later on forced Nicklas Nielsen to drive nearly a complete lap at reduced speed.  As a result, they ended up finishing four laps down in 16th.

Paul Miller Racing’s Madison Snow didn’t last very long in the race.  He was in the pits at the end of the second lap with a problem in the engine compartment that put the defending class winners in the Rolex 24 at Daytona out.

Ineichen lost his advantage on the first restart to HTP Winward Motorsport’s Russell Ward.  The second caution began a series of stops that lasted roughly five laps into the green-flag run that followed.

When Bill Auberlen pitted the Turner Motorsport BMW, it set up a battle for the class lead between GRT Grasser Racing Team’s Mirko Bortolotti and Vasser Sullivan’s Oliver Gavin, with Wright Motorsports’ Patrick Long harassing both drivers in an attempt to get back onto the lead lap following a three minute penalty for an improper wave-around under the second yellow.  Bortolotti was able to eventually get past Gavin and pull away.

However, the pit strategy for Turner Motorsport worked out.  When Bortolotti and Gavin made their final stops, it put Auberlen into the class lead.  From there, he held on to claim the win for himself and Robby Foley.

Auberlen and Foley’s margin of victory was 4.424 seconds over PFAFF Motorsports’ Zacharie Robichon and Laurens Vanthoor.  Ineichen and Bortolotti ended up third, while Gavin and Aaron Telitz settled for fourth.  Ward and Philip Ellis were fifth in their Mercedes.

IMSA WeatherTech SportsCar Championship teams will get a couple of days to rest before getting back on track for three practice sessions on Thursday.  We will have a recap of the first two of those sessions here at Frontstretch Thursday afternoon.