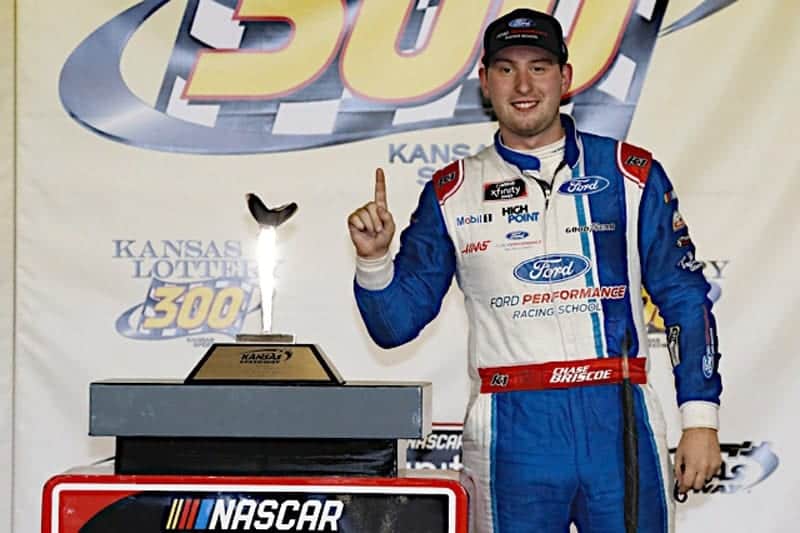 For the fifth season in a row, Stewart-Haas Racing welcomes a new driver to its stable.

After the 2020 addition of Cole Custer saw the rookie take victory at Kentucky Speedway, following the departure of Clint Bowyer the team gives its next rising star a shot at the big leagues in Chase Briscoe.

With big shoes to fill, Briscoe will have Custer as well as Kevin Harvick and Aric Almirola as teammates to learn from this season.

It was a season of highs and lows for Briscoe. Returning for his second year with SHR, the departures of Xfinity dominators Custer, Tyler Reddick and Christopher Bell meant the pressure was on for Briscoe to make a name for himself.

Briscoe set ultra-high expectations for himself, expecting nothing less than eight-plus wins and the championship.

Briscoe came out of the gate swinging, winning the second race of the season at Las Vegas Motor Speedway and locking himself into the playoffs.

In the first race back from the COVID-19 break, Briscoe came into Darlington Raceway racing with a heavy heart after suffering the loss of his unborn child in May. His fire to win burned extra bright that day and saw him out-duel Cup driver Kyle Busch to take a special and emotional victory.

Memorable Moments of the 2020 NASCAR Season.

No. 6: Two days after learning his wife had suffered a miscarriage while he was at Darlington as rain postponed the race, Chase Briscoe held off Kyle Busch for an emotional Xfinity Series win. pic.twitter.com/SYz1PGNDlp

Briscoe used the momentum from Darlington to go on an absolute tear over the summer, scoring wins at Homestead-Miami Speedway, Pocono Raceway and the Indianapolis Motor Speedway road course and establishing himself a championship favorite.

However, he finish ninth in the finale at Phoenix Raceway, bringing a rather unfortunate end to an otherwise perfect season.

Briscoe is unique, as he really is a threat to win everywhere. He has won on dirt, road courses, superspeedways, short tracks and mile-and-a-half tracks. It doesn’t matter where the series is — Briscoe will be competitive, if his past results are any precedent.

Despite having zero Cup experience entering the Daytona 500, Briscoe is driving one of the strongest cars in the field. The SHR cars were fairly impressive last season, with Harvick and Custer scoring wins and Bowyer and Almirola coming close a few times. Once Briscoe gets comfortable in the Cup cars, expect him to at the very least be extremely competitive on the road courses as well as the intermediates.

In all, he’s most likely a threat at Las Vegas, Darlington, the Charlotte Motor Speedway ROVAL and the Bristol Motor Speedway dirt track. All these varying facilities make Briscoe a true wildcard as to when and where he will be competitive. A great talent in championship-caliber equipment, he could see one of the best rookie years in recent memory.

With 2021 setting up to be the toughest season on record due to competition, his biggest strength will no doubt be his Kyle Busch levels of versatility to run well everywhere. Keep Briscoe on your radar everywhere the series stops.

For Briscoe, 2021 will be a learning year. He needs to first and foremost get comfortable in the new equipment and better understand the new competition he will be up against.

That said, expect Briscoe to be going for the the playoffs this year, whether it be by a win or on points. Like his teammate Custer, Briscoe will be looking to make some noise and show that SHR made the right call. Look for him to be chasing those wins on the road courses and the 1.5-mile tracks.

Briscoe will also be competing for Rookie of the Year honors, and currently his only competition comes in the form of Front Row Motorsports driver Anthony Alfredo. The two teams are quite the mismatch in terms of funding and speed, so expect Briscoe to come home with that honor.

Briscoe has won a race in every full-time NASCAR national series he has competed in (since 2017); the stats show the he has extreme potential to one day be a Jimmie Johnson-level talent. Being able to adapt to any car is in important, and Briscoe has shown improvement on nearly every single track he has raced on and in any type of vehicle.

As young guns like Chase Elliott and Ryan Blaney cement themselves as the current rising stars, guys like Briscoe and Custer will look to knock those guys off quick and shove their names into the mix.

The pairing with SHR seems like a match made in heaven, and only time will tell if Briscoe lives up to the hype or not.