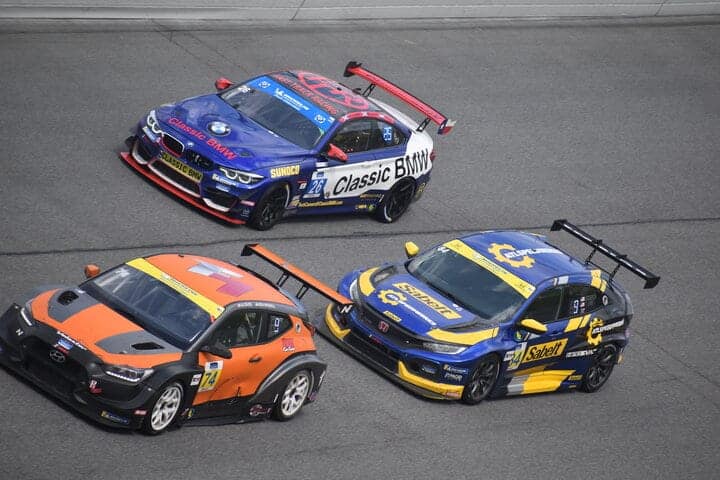 IMSA released the entry list Monday (Jan. 25) for the season opening BMW Endurance Challenge at Daytona for IMSA Michelin Pilot Challenge.  There will be 42 cars in the race between the two classes, down 10 from 2020.

In Grand Sport, there will be 25 cars doing battle.  The only one of these teams that was not in Daytona last weekend for the ROAR Before the 24 was Notlad Racing by RS1 (Rennsport One), which has filed an entry for Patrick Gallagher and Matt Dalton.  The entry list does not indicate which brand of car that the team will be using.  However, they competed last year in SRO America’s Pirelli GT4 America SprintX using an Aston Martin Vantage GT4.

Rennsport One last raced in Pilot Challenge at Daytona in 2019.  They won the 2017 Grand Sport championship with Dillon Machavern and Dylan Murcott driving a Porsche Cayman GT4 Clubsport.

Gallagher most recently drove in the series for PF Racing in a one-off at Daytona in 2019.  Prior to that, he ran the full season in 2018 for Multimatic Motorsports as a teammate to Chad McCumbee.  He also has one career start in the Xfinity Series at Mid-Ohio for BJ McLeod Motorsports, where he finished 23rd.

In TCR, there are a couple of extra teams that did not participate in the ROAR.  One is Rockwell Autosport Development, which has entered an Audi RS3 LMS Club Sport for Alex Rockwell, Mike Moore and Nelson Canache.  Canache is a Venezulan racer who competed full-time in the then-ARCA Racing Series presented by Menards for Venturini Motorsports in 2012.  He earned two top 10 finishes and finished eighth in points.

After his ARCA exploits, Canache moved to sports cars full-time, signing with Flying Lizard Motorsports to race in the American Le Mans Series’ GTC class alongside Spencer Pumpelly.  The duo won three races and finished third in points.  In 2014, Canache and Pumpelly switched to an Audi R8 LMS GT3 for the new GT Daytona class.  They were controversially given the class victory in the Rolex 24 at Daytona before having it stripped three hours later.  That ended up being the high point of a season in which he and Pumpelly finished 12th in points.  Since 2015, he’s raced only sparingly with his last race of note being a Peak Mexico Series race in 2017.

JDC-Miller MotorSports chose to skip the ROAR with their Audi, but they will be back for the full season with Mikey Taylor and Chris Miller.  For the four-hour race this week, William Tally joins the fray.  Atlanta Speedwerks has also added their No. 84 Honda for Brian Henderson and Robert Noaker that sat out the ROAR, but will race full-time.

UPDATE: Since the original entry list was released, one team has been added to it.  AOA Racing has entered their No. 85 Audi in the TCR class.

Its a strange feeling driving to Daytona knowing that I have a @IMSA ride. Can’t wait to get behind the wheel of the AOA Audi RS3 TCR for the first time tomorrow! Proud to be a part of this effort with Gino and @WilmotRacing . It’s race week!

Andrew Pinkerton, who composed the tweet above, will be joined by Gino Manley and Patrick Wilmot.  It will be the team’s third start in Michelin Pilot Challenge.

Pilot Challenge teams will be on-track starting Wednesday afternoon for practice before qualifying Thursday afternoon.  The season-opening BMW Endurance Challenge at Daytona is scheduled to start at 1:35 p.m. and will be streamed live on NBC Sports’ TrackPass.