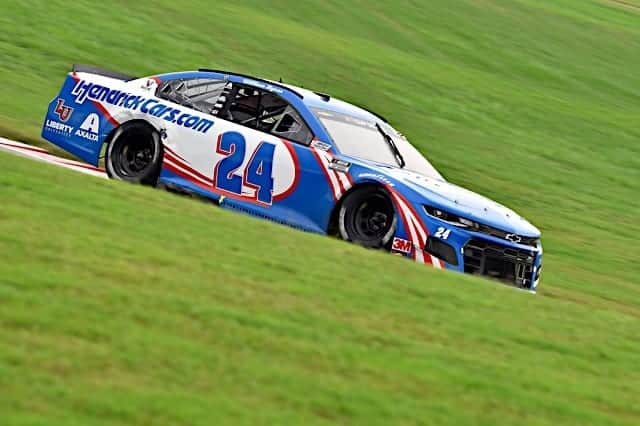 William Byron joined the club of drivers who have won races in all three main NASCAR series – NASCAR Cup Series, Xfinity Series and Camping World Truck Series – when he earned his first Cup win in the regular-season finale at Daytona International Speedway in 2020.

The driver of the No. 24 Hendrick Motorsports Chevrolet won his first Cup race, notched a career-high 14 top-10 finishes and made the playoffs for the second straight season. He ultimately finished 14th in the championship standings, third best of the Hendrick quartet.

Byron has a few new changes for this season. After Hendrick promoted his crew chief Chad Knaus, the organization hired Rudy Fugle to sit atop the No. 24 pit box. Byron also has two new paint schemes for this season, and he has new teammate Kyle Larson driving the No. 5.

Byron notched a career-high in top 10s and lead-lap finishes in 2020, but he lacked contending speed for much of the season.
While he led laps in 13 races last season, he failed to achieve a top five until the 25th race of the season, at Dover International Speedway. He promptly reeled three straight top fives, with his first win sandwiched between those three.

Yet back-to-back finishes worse than 20th, including a 38th-place finish in the final Round of 16 race at Bristol Motor Speedway, ended Byron’s championship hopes.

Bryon began October with laps led in three straight races, accumulating three top 10s too. To wrap up the season, as his teammate Chase Elliott won the championship, Byron gained 16 spots from start to finish en route to a ninth-place finish at Phoenix Raceway.

Daytona can be unpredictable, but Byron did well there last year. He won the second Bluegreen Vacations Duel, and despite his last-place finish in the Daytona 500, he has two top 10s, including his win last year, in six starts there.

Byron’s second-best track is Pocono Raceway. Byron has amassed one top five, four tops 10s and six lead-lap finishes in his six Cup starts at the 2.5-mile track in Long Pond, Pa. He won the pole for the first race there in 2019, and he also won the 2016 Truck race at the Tricky Triangle. Byron certainly has that doubleheader race weekend at Pocono circled on his calendar.

The Cup Series will race at seven road courses this year. While Byron has neither dominated at those circuits like Elliott nor driven through the field similar to Alex Bowman‘s aggression in 2019 at the Charlotte Motor Speedway ROVAL, he has been respectable making left- and right-hand turns. On July 4, the Cup Series will race at Road America. In his lone Xfinity start there, Byron both started and finished sixth.

The Cup season finale again takes place at Phoenix, and Byron has done well there in his NASCAR career. He won the pole, led 112 of the 150 laps and appeared in line to win the 2016 Truck race there before a blown engine ended his race and subsequent playoff run. The following year, he won the Xfinity race at the 1-mile track in Avondale, Ariz., leading the final 17 laps to capture his fourth, and most recent, Xfinity win.

In his Cup career at Phoenix, Byron has three top 10s in six starts. He has two ninth-place finishes, most recently the 2020 season finale. If he can successfully advance to Championship 4, Byron could be a surprise pick to win the race and title.

Hendrick is betting on Rudy Fugle to steer Byron to further success. Entering his fourth full-time Cup season, he has just nine top-five finishes. Fugle worked with Byron in the 2016 Truck season. The duo earned seven wins, 11 top fives and 16 top 10s en route to a fifth-place finish in the championship standings.

Thrilled to work with Rudy next year on the @Hendrick24Team. I'm confident we will pick up where we've left off this year @TeamHendrick, and I look forward to being back with him as we were in 2016. pic.twitter.com/VaMvdlzdZC

Byron also has new teammate Larson in the Hendrick stable. Larson is a talented wheelman himself, beyond dominating on dirt tracks across the country. Larson has 101 top 10s in 223 Cup starts, shy of half (45.2%). Larson also is five years older than Byron. Any tutelage Larson can offer Byron should benefit him.

What is Byron’s ceiling this year? With the playoff schedule, Byron could run the tables into the Round of 8. However, with the stiff level of competition, some from within Hendrick, he would need drastic improvement to make the Championship 4.

Byron and Fugle will gel together, though. After the engine in his truck blew at Phoenix in 2016, rather than fall into sadness with their championship hopes dashed, they dominated the season finale at Homestead-Miami Speedway. Also, with only eight races having practice and qualifying sessions this year, Byron’s comfort with Fugle will shine.

Their teamwork may even lead them to win the race at Nashville Superspeedway. With a bright future for Hendrick, Byron and Fugle will have a fast No. 24, utilize excellent team data and be contenders in the inaugural Cup Series race at the 1.333-mile track.

Byron and Fugle seem to be a good fit for each other, but whether they can thrive at the Cup Series level remains a question mark.

Byron will pilot a different-looking No. 24 this year, too. Both Liberty University and Axalta will feature different paint schemes on his Chevrolet.

Coming in hot in 2021. ? @WilliamByron will be bringing the heat to the track this upcoming season in his No. 24 @LibertyU Chevy! pic.twitter.com/voSJ70ElIA

Check out the new-look 2️⃣4️⃣ car hitting the track during the 2021 season! pic.twitter.com/AhV5QZyI2u

Byron spent the past two seasons with seven-time champion crew chief Knaus atop his pit box. Together, they accrued one win, nine top fives and 27 top 10s. Knaus guided him to yearly improve his amount of top 10s and lead-lap finishes, both crucial as Byron made the playoffs. While he finished three spots lower in the championship standings in 2020 than in 2019, Byron progressed as a Cup driver. Knaus, who achieved historic success with Jimmie Johnson, praised the 23-year-old Byron after their parting.

This man did very well today.
I have really enjoyed working with ⁦@WilliamByron⁩ .
He has opened my eyes to a new way to communicate with a driver.
He is one of our future champions at HMS!
Thank you for 2 very fun years! pic.twitter.com/LLZamJaIhj

Byron, with fresh paint schemes, a new crew chief with whom he had success, and continual growth as a driver will look to continue the winning traditions at Hendrick.