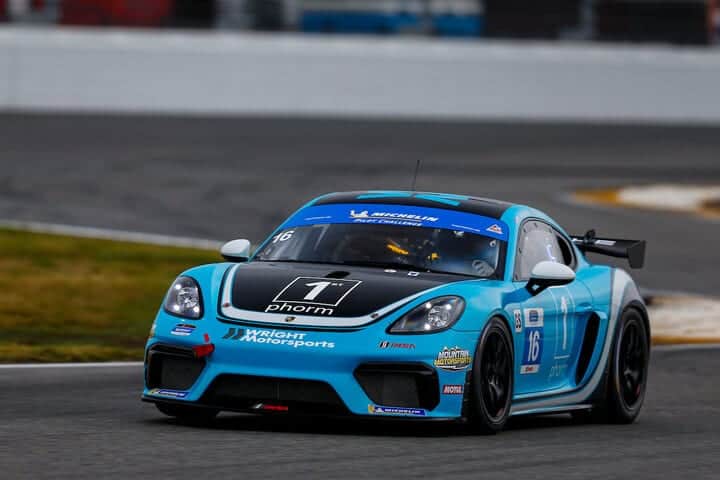 Liefooghe’s lap at 111.634 mph was fastest overall in the opening IMSA Michelin Pilot Challenge practice session Wednesday (Jan. 27).  However, the session was overshadowed by a huge crash for Wright Motorsports’ Ryan Hardwick.

About 24 minutes into the session, Hardwick lost control of his Porsche Cayman GT4 MR exiting the bus stop chicane and went hard into the wall.  The crash resulted in a 28-minute red flag period.

UPDATE: Wright Motorsports announced Thursday morning that Hardwick has been diagnosed with a concussion and has been ruled out for the remainder of the weekend.  The No. 16 Cayman has been withdrawn due to crash damage from the BMW Endurance Challenge at Daytona.

ALLAWAY: HARDWICK OUT FOR DAYTONA, TRENT HINDMAN TO SUB

The past week has been rather tough for Hardwick.  He’s been quick in both the Cayman and in the team’s Porsche 911 GT3 R in the IMSA WeatherTech SportsCar Championship’s GT Daytona class, but has had issues.  Hardwick won the GT Daytona pole for Sunday’s Motul Pole Award 100.  However, he then crashed the car in the opening minutes of the night session Saturday night, forcing the team to re-acquire their backup car from Black Swan Racing in order to race Sunday and this weekend.

Liefooghe’s quick lap of the session came on his second lap at speed, six minutes into the session.  The lap was five-hundredths of a second faster than Andrew Wojteczko Autosport (AWA)’s Kuno Wittmer.  Turner Motorsport’s Robby Foley was third quickest in his BMW, followed by Archangel Motorsports’ Trent Hindman in the fastest of the Aston Martins.  KohR Motorsports’ Kyle Marcelli was fifth quickest.

CarBahn Motorsports with Peregrine Racing’s Tyler McQuarrie was sixth fastest, then Murillo Racing’s Eric Foss in the fastest Mercedes.  Dillon Machavern was eighth in the second Turner Motorsport BMW, then Pumpelly.  BimmerWorld’s Nick Galante was 10th.  Hardwick was 11th fastest before his crash.

In TCR, JDC-Miller MotorSports’ Mikey Taylor, was quickest.  Taylor’s lap at 108.384 mph was more than a second and a half than anyone during the ROAR in TCR and over a second faster than the current track record.  Normally, this kind of performance would result in cries of sandbagging.  However, JDC-MIller MotorSports did not attend the test.  You cannot be accused of sandbagging if you don’t show up.

Also of note, JDC-Miller MotorSports’ Audi is different than the other Audi RS3s in the series.  This car has a sequential transmission as opposed to a DSG (paddle-shift transmission).  There are rule differences between the two cars.  The sequential car has to be five kilograms (~11 pounds) heavier, but is allowed a minimum front ride height of 60 millimeters, nine millimeters less than the DSG car and the lowest of all TCR cars. That said, the changes would not add up to a multiple-second advantage over the rest of the field.

The 60-minute session ultimately only had 29 minutes or so of on-track time due to a second red flag that ended the session early.  VGMC Racing’s Ruben Iglesias stalled his Honda Civic Type-R TCR on-track to bring out the red flag.

With Wright Motorsports’ withdrawal early Thursday morning, 41 cars were ready to take to the 3.56-mile road course in Daytona for 60 minutes of practice.  Pumpelly turned in his quick lap just over halfway through the session.

Pumpelly’s lap was nearly a half-second faster than the Audi of McCann Racing’s Andrew Davis. Rebel Rock Racing’s Robin Liddell was third fastest in his Chevrolet, then Tyler McQuarrie in the CarBahn Motorsports with Peregrine Racing Audi.  Turner Motorsport’s Bill Auberlen was fifth.

Wittmer, the race’s defending pole sitter and track record holder, was sixth in his McLaren, followed by Spencer Pigot and Marcelli.  Greg Liefooghe was ninth and Hindman 10th.

TCR was much closer than it was Wednesday, but the speeds were still up.  Dupont was fastest with a lap at 108.513 mph.  This was nearly six-tenths of a second faster than Atlanta Speedwerks’ Brian Henderson in his Honda.  Block was third, then LA Honda World Racing’s Mike LaMarra and VGMC Racing’s Victor Gonzalez Jr.

Compared to Wednesday’s session, Thursday morning’s action was much quieter with very little in terms of interruptions.  Bryan Herta Autosport’s No. 98 Hyundai Elantra N TCR did not practice.  To this point in the weekend, the No. 98 has not been on-track at all.

Michelin Pilot Challenge teams are scheduled to qualify Thursday afternoon at 2:25 p.m.  We’ll have a recap of qualifying right here at Frontstretch.