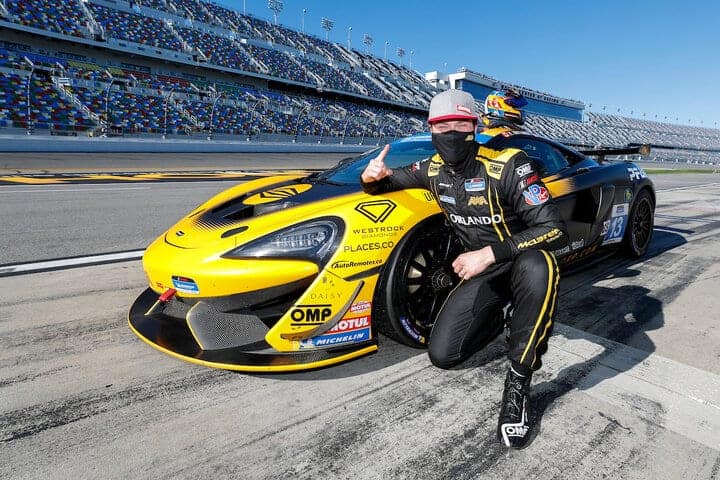 Andrew Wojteczko Autosport’s Kuno Wittmer managed to break his own track record Thursday afternoon (Jan. 28) to win the pole for Friday’s BMW Endurance Challenge at Daytona with a lap at 113.644 mph.  Given the fact that AWA sat out the remainder of the 2020 season due to the COVID-19 pandemic and the closure of the border between the United States and Canada, this will be Wittmer’s second straight pole.

Wittmer’s lap is a new track record for Michelin Pilot Challenge, roughly two-tenths of a second faster than his pole lap from last year.  The lap was five-eighths of a second faster than McCann Racing’s Andrew Davis.  FASTMD Racing’s Alexandre Papadopulos will start third, followed by Motorsports In Action’s Spencer Pigot.  BGB Motorsports’ Thomas Collingwood will start fifth in his Porsche.

In TCR, it was a close battle at the front of the pack between three or four different teams.  Rory van der Steur was quick early on, but chose to pull in with five minutes to go.

Ultimately, the race for pole came down to a fight between KMW Motorsports with TMR Engineering’s Tim Lewis Jr. and Atlanta Speedwerks’ Robert Noaker, a 16-year old racer who is only making his second career Michelin Pilot Challenge start.  On his final lap in the session, Noaker turned in a lap at 108.125 mph that held up to give him his first career Michelin Pilot Challenge pole.

Noaker’s lap, which is an official track record for the TCR class, was two-hundredths of a second faster than Lewis.  Van der Steur will start third, followed by JDC-Miller MotorSports’ William Tally.  VGMC Racing’s Victor Gonzalez Jr. will start fifth in his Honda.

Four teams did not set times during qualifying.  In Grand Sport, Archangel Motorsports did venture onto the track.  TCR saw three teams stay in the pits.  One was Roadshagger Racing, the defending winners from last year.  AOA Racing’s Audi did not go out to qualify, and neither did Bryan Herta Autosport’s No. 98 Hyundai Elantra N TCR, which is still yet to see the track this weekend.

The BMW Endurance Challenge at Daytona is scheduled to go green Friday afternoon at 1:35 p.m.  The race will be streamed live on NBC Sports’ TrackPass.

Nice BOP again by IMSA, if you’re a rich kid driving daddy’s McLaren that is. What a joke this series is now.