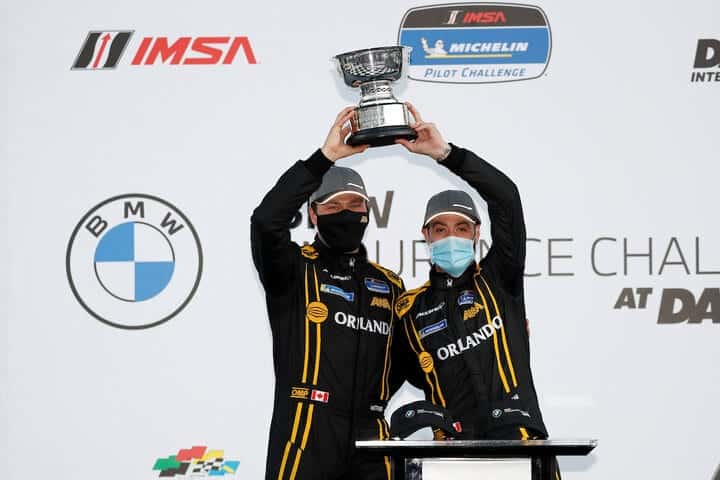 The BMW Endurance Challenge at Daytona Friday (Jan. 29) was a very competitive race.  Andrew Wojteczko Autosport (AWA) chose to make their final pit stop on the restart after the fifth full course caution.  Kuno Wittmer ran hard to get past everyone as they made their final pit stops under green.  Wittmer was able to take the lead with 10 laps to go from TeamTGM’s Hugh Plumb and held on to take himself and teammate Orey Fidani to victory lane.

“AWA are just so…spot on,” Wittmer told NBC Sports’ Dillon Welch in victory lane.  “Hats off to my buddy Orey [Fidani], he drove his head off.  If it wasn’t for a great teammate, we wouldn’t be here.”

Wittmer set a track record Thursday in winning the pole for the race.  Once the green flag came out, Wittmer was able to open up a small gap on the field.  Meanwhile, Alexandre Papadopulos was able to get past Andrew Davis for second.

KohR Motorsports was fastest overall in the morning warmup, but their race didn’t even reach lap 10 before Chuck Cassaro spun and hit the wall exiting the infield to bring out the first caution.  Cassaro was ok, but the KohR Mustang was out on the spot.

After a second caution, Wittmer came under pressure from Turner Motorsport’s Dillon Machavern.  Wittmer held on until he made his first pit stop on lap 25 to put Fidani in the car.  Machavern held off on pitting until lap 36.  Shortly afterwards, the yellow came out due to Ruben Iglesias stopping on-track.

AWA ran into significant issues on lap 42 when Fidani ran hard into the back of Murillo Racing’s Eric Foss.  The hard hit sent Foss into the back of Automatic Racing’s Dr. Ramin Abdolvahabi and spun both Foss and Abdolvahabi out.  Fidani was judged responsible for the incident and given a drive-through penalty.  Foss’ car was damaged significantly and ended up going behind the wall.

Cautions kept the field tightly packed.  A debris caution on lap 69 brought everyone back together.  It was after the fifth caution that Wittmer made his final stop of the day, knowing that he probably needed some help to get to the checkers.

Wittmer got that help when Nelson Canache had some kind of brake failure in the infield after going wide a number of times.  The result was this crash at unabated speed into the tires in the International Horseshoe.

Canache was able to walk away from the crash uninjured.  The Audi for debutant team Rockwell Autosport Development was badly beaten up in the hit.

Pit stops put Hugh Plumb in the lead for TeamTGM with Wittmer right on his tail.  It took less than a lap for Wittmer to make the move for the lead.  Wittmer held off a swarm of BMWs on one more restart with a couple of laps to go to earn the victory.  For Fidani, it is his first career Michelin Pilot Challenge victory.

The Plumb brothers (Hugh and Matt) were sixth in the No. 46 Camaro with the new Toyota of Javier Quiros, Julian Santero and Alfredo Najri in seventh after running as high as third.  HTP Winward Motorsport’s Indy Dontje and Russell Ward were eighth, while Motorsports In Action’s Sheena Monk and Spencer Pigot were ninth.  PF Racing’s Chad McCumbee and James Pesek rounded out the top 10.

The TCR class saw much of the early portion of the race dominated by KMW Motorsports with TMR Engineering’s Tim Lewis Jr. and Atlanta Speedwerks’ Robert Noaker.  Noaker, who at only 16, was making his second career start, was strong through the over two hours that he spent in the car.

Interfering with the two-car battle was Roadshagger Racing’s Gavin Ernstone.  Ernstone did not go in qualifying Thursday and started at the rear because of it.  Like last year, he charged to the front in a hurry, taking the class lead on lap 18.

The third yellow when Iglesias’ Honda failed brought pit stops.  Roy Block got in the No. 5 Alfa Romeo at that point and dropped back while Noaker maintained the advantage before turning it over to Brian Henderson.  Sure enough, pit strategy shook the order up as the debris caution put Atlanta Speedwerks’ No. 94 Honda with Ryan Eversley in the lead.

Eversley opened up a gap while Van der Steur Racing’s Denis Dupont (who was a lap down at the time) was racing the other leaders hard.  On lap 78, Tim Lewis Jr. attempted an outside pass on Henderson, who was blocked by Dupont, for second.  Contact was made in the bus stop chicane.

Tim Lewis Jr.’ Alfa Romeo ended up in the tire barrier, while Roadshagger Racing’s Jon Morley ended up hitting Henderson and briefly getting airborne before grinding to a stop.  All three cars were effectively out on the spot, although only Morley couldn’t get back to the pits under his own power.

Eversley chose this moment to dive into the pits to top off his fuel before the caution came out.  That allowed Dupont to get back onto the lead lap.

Bryan Herta Autosport’s Michael Lewis inherited the lead on the restart, but Eversley was able to run him down and retake the advantage.  Eversley was able to hold off the No. 77 Hyundai until Dupont’s Hyundai failed to bring out the final caution and bunch the pack back up.

The yellow brought JDC-Miller MotorSports’ Mikey Taylor back into play.  The No. 17 Audi had been quick all weekend, but they had run out of fuel while Chris Miller was driving earlier and ground to a stop on pit road, costing them a lap in the process.  Prior to Eversley getting the lead back from Michael Lewis, Taylor had managed to unlap himself the old-fashioned way by running down the No. 77 Hyundai and overtaking it.

By the time of the final caution, Taylor had gotten himself back up to third.  When the green came back out, Taylor got a huge run on the outside and was able to sweep around both Eversley and Michael Lewis to snag the lead.  From there, Taylor held on to give him, Miller and Dr. William Tally the victory.

JDC-Miller MotorSports’ margin of victory was just under three-quarters of a second over Eversley, Todd Lamb and Greg Strelzoff.  Michael Johnson and Stephen Simpson were third in their Hyundai, followed by Michael Lewis and Taylor Hagler.  Copeland Motorsports’ Mason Filippi and AJ Muss were fifth.

Michelin Pilot Challenge teams will be off for the next few weeks.  The next race on the schedule is the Alan Jay Automotive Network 120 at Sebring International Raceway.  That race is scheduled for March 19.