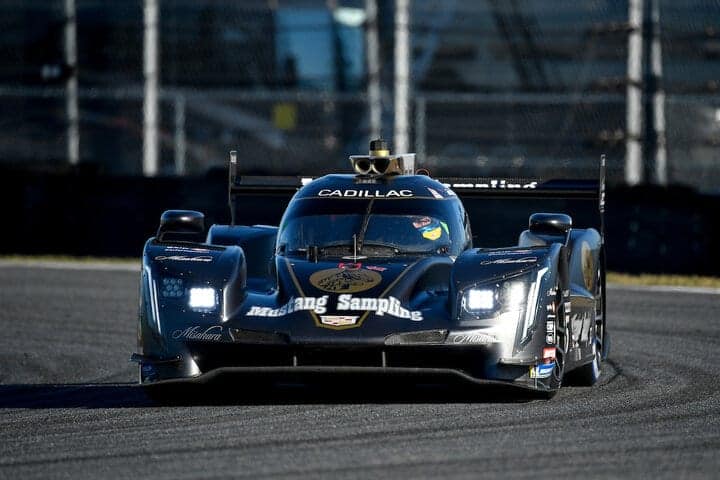 Cadillac continued to show their pace Friday (Jan. 29) in Daytona.  JDC-Miller MotorSports’ Loic Duval was fastest overall in the final Rolex 24 practice session with a lap at 134.785 mph.

Duval’s lap was 12-thousandths of a second faster than Chip Ganassi Racing’s Kevin Magnussen.  Mazda Motorsports’ Oliver Jarvis was third with Wayne Taylor Racing’s Filipe Albuquerque right on his tail.  The top four cars (from all three brands in the DPi class) were separated by just five-hundredths of a second.  Action Express Racing’s Pipo Derani was fifth quickest.

Tower Motorsport by Starworks’ John Farano was fastest in LMP2 with a lap at 132.880 mph.  This was one-eighth of a second faster than High Class Racing’s Ferdinand Habsburg.  WIN Autosport’s Tristan Nunez was third, followed by DragonSpeed’s Ben Hanley and Cetilar Racing’s Giorgio Sernagiotto.

Meanwhile, PR1 Mathiasen Motorsports, which has been the fastest team in LMP2 for most of the weekend, ran into trouble during the session.  Nicolas Lapierre spun in West Bend and hit the tires to bring out a red flag 10 minutes into the session.  Lapierre was ok and didn’t seem to hurt the car too bad.  It did end his session, though.

? Not our best session, after an off into tires early in the practice. We are working hard to fix the damage. We got this! ?? #Rolex24

Risi Competizione’s Alessandro Pier Guidi was quickest in GT Le Mans with a lap at 124.932 mph, good for 18th overall.  His lap was two-hundredths of a second faster than the Porsche of WeatherTech Racing’s Kevin Estre.  Corvette Racing’s Tommy Milner was third, then the BMWs of Philipp Eng and Marco Wittmann.

All six of the GT Le Mans cars were faster than the quickest LMP3 entry, the Riley Motorsports No. 91 driven by Jeroen Bleekemolen.  Bleekemolen’s lap at 124.340 mph was five-eighths of a second faster than Performance Tech Motorsports’ Rasmus Lindh.  Moritz Kranz was third.

While Bell was eighth quickest in GT Daytona, teammate Frankie Montecalvo stalled on the apron of turn 3 of the tri-oval halfway through the session.  This caused a second red flag.

The Rolex 24 at Daytona is scheduled to go green at 3:40 p.m. Saturday afternoon.  Coverage will start at 3:30 on NBC, then switch around between NBCSN and NBCSports.com before returning to NBC at 2 p.m. Sunday.