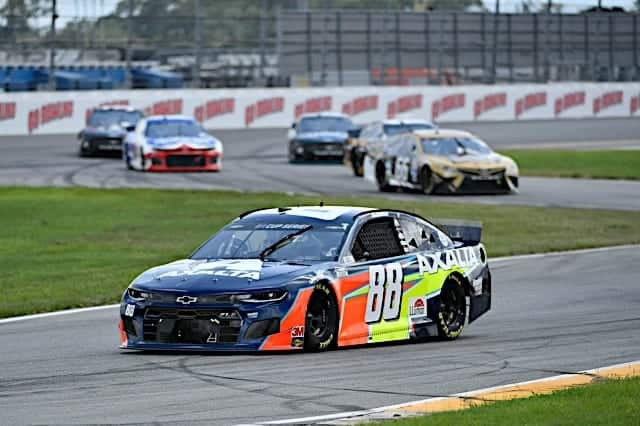 Alex Bowman started the 2020 NASCAR Cup Series season on the front row of the Daytona 500 for the third straight year and hoped for at least a top-10 finish. Unfortunately, Bowman was involved in the Big One and finished 24th.

But it didn’t take long for him to  break through, scoring his second career win at Auto Club Speedway just before the COVID-19 pandemic put the season on pause.

On May 16, 2020,, the day before NASCAR returned to racing, Bowman signed an extension through the 2021 season.

After a second-place finish at the first Darlington Raceway event, Bowman was quietly second in points behind Kevin Harvick. After that great run, though, Bowman scored 11 finishes outside the top 15 and fell to 12th in the standings by the end of the regular season.

The playoff structure rewards drivers who perform well at the right time, though, and Bowman took advantage of the reset. In the playoffs, Bowman scored seven top 10s and almost made it into the Championship 4. He eventually finished in points, which was the best points position finish since his 2012 ARCA Menards Series season.

For 2021, Bowman moves over from the No. 88 car to the No. 48 to replace seven-time champion Jimmie Johnson.

Bowman has scored two career wins, but he cannot defend either due to Chicagoland Speedway and Auto Club being dropped from the 2021 schedule.

But Bowman has been in contention at multiple tracks for a win in his last three years. Two tracks to watch are located at the same location; if he wants to take himself to the next level, look at Charlotte Motor Speedway. At the two ovals race at Charlotte, Bowman led a combined 215 laps between the two races. In both races, Bowman made a mistake off of turn four cost him a top-five finish. Mistakes like that can be the difference between advancing or not into the next round of the playoffs.

At the tail end of the season, the Charlotte ROVAL has been a track at which he has exceled, with a worst finish of eighth in three starts. In two of his three finishes, Bowman has finished behind Hendrick teammate Chase Elliott. The ROVAL sits at a critical point in the schedule, as the Round of 12 will go down to the Round of 8. If Bowman wants to succeed in the playoffs, he must find that extra edge to score a victory at the ROVAL and be the top dog at Hendrick.

The big question is how Bowman going to handle the pressure of taking over Johnson’s ride. It has been 1,338 days since the No. 48 last scored a points-paying race. Bowman has scored two wins in the Cup Series in that span. Don’t be surprised that if Bowman captures a win within the first 10 races of the season. Even if Bowman fails to win to get into the playoffs, Bowman is likely to perform well enough to get into the playoffs.

In the playoffs, the No. 88 team should focus on how to outperform the playoff drivers. If Bowman wants to repeat his 2020 postseason performance, he will need to perform at the cutoff tracks like Bristol Motor Speedway, the Charlotte ROVAL and Martinsville Speedway.

Elliott proved last year that Hendrick was a championship team not only because it had seven-timer Johnson behind the wheel. Bowman may be able to do the same now that Johnson is gone.

After 20 years of Jimmie Johnson in NASCAR, there will be a new driver in the No. 48 car. Bowman, crew chief Greg Ives and the former No. 88 crew are going to face the pressure of living up to the legacy of Johnson. This is not the first time that Bowman has filled big shoes, though. Bowman already replaced Hall-of-Famer Dale Earnhardt Jr. when he took over the No. 88.

Hendrick has been a formidable force in NASCAR since the ’80s. From the mid-2000s to 2015, Johnson and Jeff Gordon battled for multiple wins and championships.

Since 2016, Hendrick has four wins outside drivers named Johnson and Elliott. Bowman could take it to the next level and restart that Hendrick rivalry with Elliott.