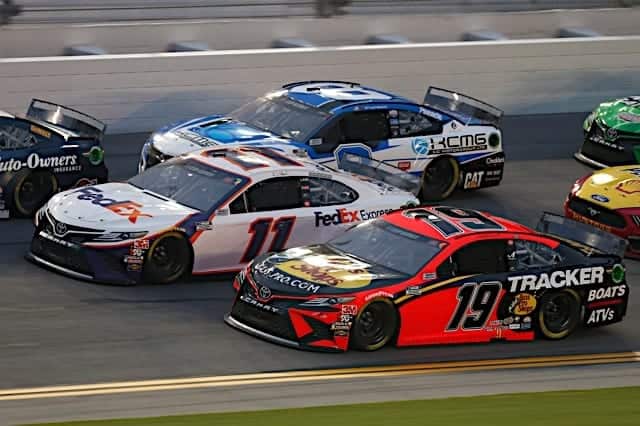 Editor’s Note: This article on 2021 Daytona 500 odds is posted in collaboration with an outside sponsorship client. The opinions and information contained within do not necessarily represent Frontstretch and its staff.

The leading contenders for the 2021 Daytona 500 are starting to take shape in the futures sports betting markets. The “Great American Race” always captures the imagination of NASCAR bettors every year and this season is no different. In fact, the race (Feb. 14) is going to be particularly fascinating given that one particular driver is looking to make history by winning a hat trick of successive Daytona 500s.

If you are someone that enjoys a flutter on the “Super Bowl of Stock Car Racing,” read on as we discuss the main names to look out for on your betslips.

The eyes of the NASCAR world will be transfixed on 40-year-old Denny Hamlin, who has won the last two Daytona 500 races. Hamlin became only the fourth driver to win back-to-back Daytona 500s in the history of the sport, joining an illustrious list of successful drivers including Richard Petty (1973-1974), Cale Yarborough (1983-1984) and Sterling Marlin (1994-1995). Hamlin will be looking to go one further than this trio in February 2021 by making it a hat trick of successive wins of the most prestigious stock car race on the planet. FOX Bet, a new U.S. sports betting operator across New Jersey, Colorado, Pennsylvania and Michigan, has priced Hamlin as the +800 pre-race favorite to achieve this milestone.

Joey Logano made history in 2015 by becoming the second-youngest driver (age 24) to win the Daytona 500. Only Trevor Bayne has been younger (age 20 in 2011) when crossing that iconic finish line in first place. There’s a reason why FOX Bet has priced Logano as a joint-second favorite at +1000 to win his second Daytona 500; Logano has the car beneath him to achieve it. Team Penske is certainly one of the leading forces in NASCAR right now and it’s no surprise two of their drivers have been champions on the grid. Logano even achieved top-10 finishes in the Daytona 500 four straight years, between 2016 and 2019, so it’s clear that the race format suits him.

Ryan Blaney came within a whisker of becoming Daytona 500 champion in 2020. Unfortunately for him, he was involved in a nasty collision with fellow Ford driver Ryan Newman, causing Newman to flip out and miss the chance of grabbing a second Daytona 500 victory. Fortunately, Newman escaped from the dramatic scene unscathed.

However, Blaney’s clash with Newman hindered his own chances of victory on the final lap, too. Denny Hamlin nipped ahead of Blaney on the home straight to take the win by a mere 0.014 seconds – the second-smallest Daytona 500 win margin ever recorded. Blaney, like Logano, is part of Team Penske and certainly has the firepower to be in contention again come 2021.

Chase Elliott, the son of Bill Elliott, is one of the most talented young prospects in NASCAR right now. The 25-year-old bagged the Cup Series title in 2020 and is looking to add a Daytona 500 victory to his already bulging list of achievements in the sport. As a rookie, Elliott managed to qualify on pole position for the 2016 edition of the race and did so again the following year. His best finish so far has been 14th in 2017, but it’s impossible to discount such a talented young driver with ice running through his veins right now.

Elliott and Hendrick Motorsports seem to be the perfect fit, over five years in and a Daytona 500 victory would be the perfect cherry on top of this partnership. Elliott joins Logano and Blaney as joint-second race favorites priced at +1000.

36-year-old Brad Keselowski finished second in the 2020 NASCAR Cup Series title chase. With 34 career wins to his name, he should never be discounted when it comes to the Daytona 500. As part of Team Penske, it’s no surprise that the sportsbooks have priced him at +1100 to win his maiden Daytona race. Fourth and third-place finishes in 2013 and 2014, respectively, have not been followed up on as of late. But Keselowski’s 2020 form demonstrated signs of returning to the kind of consistency shown when he won the Cup Series back in 2012.

Other notable names toward the top of the 2021 Daytona 500 futures betting market include Kyle Busch, Kevin Harvick and Aric Almirola, all of whom have the potential to take the checkered flag, too.