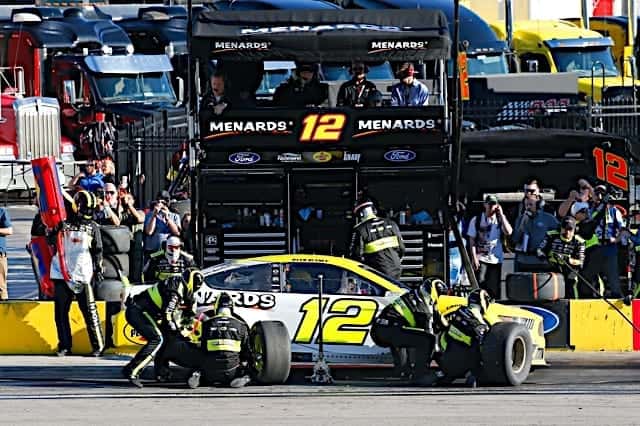 Roger Penske decided to reinvent his NASCAR establishment, Team Penske, at the beginning of 2020 by swapping crew chiefs between his three drivers. 2012 champion Brad Keselowski was given Jeremy Bullins, who had been with Ryan Blaney for the past four seasons. Joey Logano was paired with Keselowski’s former crew chief Paul Wolfe. That meant Blaney would team up with 2018 champion crew chief Todd Gordon, who won that title with Logano.

While some were scratching their heads, others seemed optimistic. After the first four races, the plan looked masterful. Unfortunately, the pandemic shut the sport down for two months, and each Penske driver was forced to find alternative routes of communication to learn their new shot-callers. Blaney was no exception, even after his first four races seemed to put him in the championship conversation.

Heading to Daytona International Speedway next week, Blaney has another year of experience and a season with Gordon for what has the makings to be a special year.

Blaney’s season started off in a dramatic way at the Daytona 500. Coming down the backstretch on the final lap, Blaney gave Ryan Newman a large push past race leader Denny Hamlin. Coming down the frontstretch, Blaney got a run on Newman. Weaving in and out to attempt a pass, the fifth-year driver decided to try and push his fellow Ford teammate to victory. Instead, he turned the No. 6 into the outside wall, sparking a horrific crash.

After the third race of the season, the then 26-year-old found himself as the points leader for the first time, despite an 11th and 19th at Las Vegas Motor Speedway and Auto Club Speedway; he earned 16 stage points in Vegas and 19 at Auto Club.

Honored that @drinkBODYARMOR is running a Kobe Bryant tribute scheme this weekend. I was fortunate enough to meet Kobe & this is a great way to honor him, Gianna & all the victims. Stay tuned for merch details and all proceeds will go to https://t.co/WdOVfr5mRk. #MambaMentality pic.twitter.com/UrtylAIsCK

But Blaney was given the unfortunate nickname of “Bad Luck Blaney,” especially after the first four races. A late caution in Vegas derailed his hopes of winning as he was leading with five to go. While running second with four laps remaining at Auto Club, Blaney had a tire cord that pushed him back to 19th.

And that is basically how the season went for the No. 12 team. At plenty of events he Blaney had a shot at the win but came up just short or had an outside issue plague him.

Take Texas Motor Speedway, for example: Blaney had led 150 laps and absolutely dominated the race, but as he pitted for a green-flag stop with less than 30 laps remaining, rookie Quin Houff attempted to pit three lanes up, collecting two other drivers and set off a crash. The No. 12 team recovered for seventh, but it was certainly a missed opportunity outside of its control.

He did, however, win the June race at Talladega Superspeedway in an exciting, photo-finish result over Ricky Stenhouse Jr.

Blaney was eliminated in the Round of 16 after a dismal couple of races, but as soon as the series rolled into Vegas for the Round of 12, the team hit a hot streak. In the last seven races, Blaney recorded six top 10s along with three top fives, a strong way to end the year.

In years prior, Blaney’s intermediate track speed was a mixed big. That was not the case in 2020.

Take a look at 1.5-mile tracks alone. Blaney earned nine top 10s on the cookie-cutter tracks, with five of them being top fives. He also led 297 laps on 1.5-mile tracks.

Tracks like Charlotte Motor Speedway, Atlanta and Texas should be circled on this team’s calendar, but the intermediate tracks in general present a strong opportunity.

Look no further than the superspeedways when finding value in Blaney’s attributes. The Hartford, Ohio, native has recorded two wins at Talladega in the past two years, both coming by a 0.007 margin of victory. He also recorded finishes of second and sixth at Daytona last season. At Daytona, Blaney has four top 10s and two top fives. At Talladega, the young driver also has four top 10s and three top fives, with two of those being wins. When a driver is out front that much at these so-called wildcard tracks, they are a favorite.

While inconsistency has plagued Blaney numerous times, he has still found a way to expand his resume of tracks. In the two road course races in 2020, the Penske driver finished fifth and sixth, including 14 laps led at the Charlotte ROVAL. In  2019, he had finishes of third, fifth and eighth. This young driver seems to get better each time the circuit visits road courses, and with seven on the 2021 schedule, he may break out for at least a win or two.

There are two keys for the No. 12 team this season: finish races and find consistency.

I have a gut feeling that with Chase Elliott winning the title in 2020, Blaney is going to want to follow that up with a title of his own this season. And why not? Sure, there have been other guys who have been winning nonstop who haven’t lifted that trophy for a first or second (or third) time, but Blaney has no doubt had the speed to win multiple races. If races had played out like they were appearing to in 2020, it’s easy to see YRB with at least four or five more wins. He showed in the 2019 playoffs and last seven races of 2020 that he can find consistency in the current format. Now he just needs to find it the whole year or at least the whole postseason.

If Blaney and Co. have the same speed as last season or even more speed, and they can cement race finishes, watch out. The goal should be to win at least three races in 2021, and the list of tracks that Blaney has found success at present an opportunity to do just that.

As for consistency stats, this team needs to reach at least 13-15 top fives and 20 top 10s. Blaney has never reached 20 top 10s before in a season (18 is his highest). If he wants to compete for a title, the good statistics need to be great statistics.

But all told, a Championship 4 appearance needs to be the chief goal. Blaney has reached the Round of 8 twice and nearly won his way into the title race in 2019. Does he need to win it? That would be nice, but not necessarily. It is certainly time for Gordon and Blaney to mesh in their second season together, and there were flashes of brilliance in 2020.

Blaney has sort of gotten a bad rap in the early part of his young career. Some have called him overrated or not able to step up to the challenge. However, it doesn’t take research to know that this kid is something special and has a massive amount of potential in him.

Now, 2021 needs to be the year he finds that speed and consistency and puts it all together to make a run at the title.

Blaney certainly has the makings to win a title, and time is on his side. It is just a matter of putting whole races together and capitalizing on opportunities.