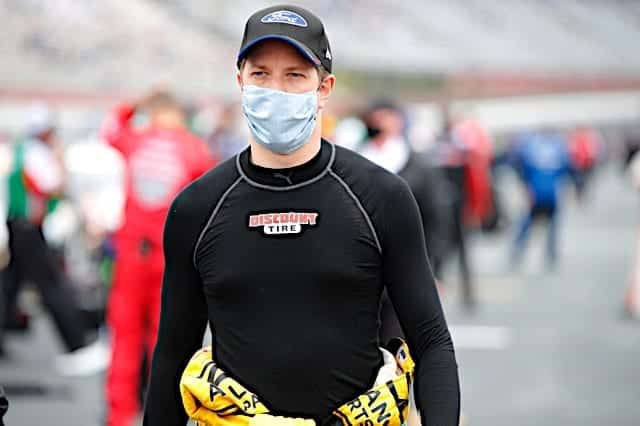 Since moving to the No. 2 ride at Team Penske a decade ago, Brad Keselowski has been an absolute model of consistency. As we head into the 2021 NASCAR Cup Series season, Keselowski is once again expected to be a championship front-runner.

The 2012 series champion has won a race every year since 2011, the second longest active streak. Additionally, he has three or more wins in all but two of those seasons and double-digit top-five results in all but one.

Keselowski, a second generation NASCAR competitor, had enjoyed a great deal of success throughout his tenure at the helm of Roger Penske’s flagship team. But he came into the 2020 with a new challenge, as Paul Wolfe, the crew chief who had led the way for all of his wins in that ride, was shipped off to his teammate Joey Logano in a three-way, in-house crew chief trade that also included Ryan Blaney. When the musical chairs shifting was done, Jeremy Bullins would occupy the seat atop Keselowski’s pit box.

If you missed the live, here are some key takeaways…@12WillPower believes in the vortex theory @Blaney’s dog’s head is bigger than his @joeylogano & @josefnewgarden are expert ping pong players @mattdracing is the winner of most shirtless pictures posted to social pic.twitter.com/XTx2rrQgtH

Successfully matching a crew chief with a driver is more than just trading uniform shirts. The relationship between the two has a profound impact on the stat sheet. Therefore, a big question mark hung over the No. 2 team as 2020 began.

A crash in the season opener at Daytona International Speedway did little to hinder the team, as Keselowski would only fail to finish a race one more time all year. While Wolfe and Keselowski were immensely successful together, they both demonstrated an ability to excel without the other. The No. 2 went to victory lane four times, winning at Charlotte Motor Speedway, Bristol Motor Speedway, New Hampshire Motor Speedway and Richmond Raceway.

First win of the season was a big one…for me, for the #2crew and SSgt. Reep’s family. They’ll always be honorary members of our team and my hope is that they always know how appreciative we are of their family’s sacrifices ??

Love that we could share this with them @BKCFF pic.twitter.com/Kg2Gp2jh8q

While other drivers stole the headlines piling up wins, Keselowski was remarkably consistent. He finished worse than 19th just three times all season, winding up in the top 10 in 24 of the 36 events. A runner-up finish in the season finale left him one spot short of a second Cup title, but it was hard to be too disappointed for the 36-year-old veteran.

While capable of winning anywhere, Keselowski is a force on short tracks. He has collected seven of his 34 career wins on the three short tracks frequented by the premier division of NASCAR. He also excels at longer but still relatively flat racetracks, such as Pocono Raceway, Indianapolis Motor Speedway and New Hampshire.

Funny story. Visited @richmondraceway last year for a media tour and they showed me the gong their sales team rings for big wins. Well I said I wanted that thing in victory lane for my next big win.

Sure enough… they made it happen ? good time celebrating with the team! pic.twitter.com/y63Uioq6x3

Yet another area of expertise for “Kez” is superspeedway racing. He has yet to collect a Daytona 500 trophy but leads all active drivers in wins at Talladega Superspeedway with five and scored a victory at Daytona in the summer of 2016.

The best-case scenario for Keselowski and company is fairly simple: without the championship, the year won’t be a total success. He has been eighth or better in the final standings eight times in the past 10 years. His runner-up finish this past season merely solidified him as a top level contender, and there’s no doubt that the No. 2 team is only interested in the No. 1 spot.

As for worst-case scenarios, it’s hard to imagine this group experiencing any significant falloff. All the major pieces are still in place, and with a year of experience together, Bullins will likely continue to help his driver enhance an already impressive résumé.

The major pitfall here is the same one that seems to nab at least one driver every year: they become victimized by their own success. Perhaps they peak too soon and momentum slows just when they need it the most. I don’t anticipate Keselowski having too much trouble making the Championship 4 in 2021, but I would’ve said the same for Kevin Harvick last year.

Wins, and plenty of them. The Michigan native remains one of the best drivers on the circuit. He isn’t limited to one particular type of race or track, which is part of what keeps him in contention year-after-year. When it’s all said and done, there’ll be a spot for him in the NASCAR Hall of Fame, and rightfully so. But for the time being, Keselowski is looking to add to his list of accomplishments, and I wouldn’t bet against him doing just that.