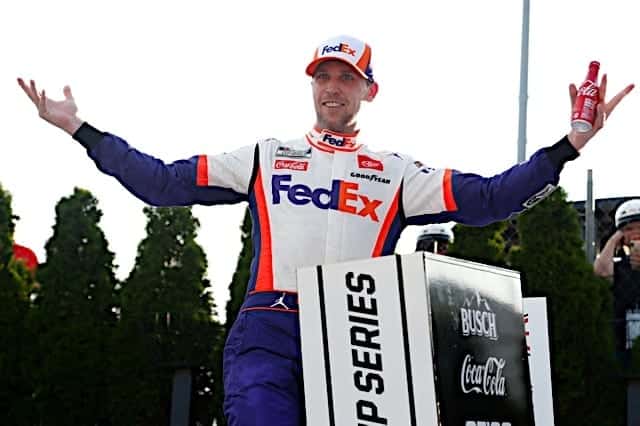 Joe Gibbs Racing staple Denny Hamlin returns to the No. 11 Toyota in 2021, following up a seven-win 2020 campaign with year 17 of NASCAR Cup Series competition. The veteran and longtime sponsor FedEx signed a multi-year extension with the team earlier this week, following his success in the new decade’s opening trip around the sun, and also sets his sights on new horizons with the help of a basketball legend.

Hamlin and six-time NBA champion and Chicago Bulls great Michael Jordan have partnered up to bring 23XI Racing to life for the 2021 season. The No. 23 Toyota will be piloted by Bubba Wallace, the effort making Hamlin one of the few people in recent memory to act as an owner and driver simultaneously.

All signs seemed to be pointing toward a third-time’s-the-charm effect for Hamlin in 2020’s edition of the playoffs. He racked up the second-most wins of any driver heading to the season finale at Phoenix Raceway, was the overall dominant driver throughout the season when compared to his Championship 4 competitors, and his main competition, Kevin Harvick, had been eliminated a week earlier at Martinsville.

Alas, it was not to be for the Chesterfield, Va., native. Hamlin struggled and consistently ran last of the title-contending quartet, finishing there and concluding his season on a down note. Fourth was the same spot he finished in the previous year when he was championship-eligible, and he finished third in 2014, the first year of the playoff format. 2010 remains the closest the longtime No. 11 driver has come to a title; he finished second to Jimmie Johnson after a close points battle.

Outside of the season-ending disappointment, Hamlin tacked on 18 top-five and 21 top-10 efforts along with the seven wins, leading 1,083 laps in the process and recording an average finish of 9.3. Hamlin has won at least six races in each of the past two years, rebounding nicely after a winless 2018; a decade after the runner-up 2010 result, he’s putting up similar (and better) numbers.

Right off the bat, the Cup Series heads to Daytona International Speedway for the season opener. Hamlin has claimed back-to-back trophies in the last two Daytona 500s at the superspeedway. He also won the prestigious race in 2016, adding up to three wins there in the last five years. Enough said.

Here is the final lap of the Daytona 500 in which Ryan Newman's car was flipped at the line.

We will continue to keep you updated on his status as we learn more. pic.twitter.com/qkEwQBpoP0

Kansas Speedway and Pocono Raceway have also been kind to the Virginian over the past two years, as Hamlin has won a race at each track each year. Last year also featured wins at Darlington Raceway, Homestead-Miami Speedway, Dover International Speedway and Talladega Superspeedway; across the seven victories, the No. 11 led at least 100 laps twice.

In 2020, Hamlin led more than 100 laps at Bristol Motor Speedway’s spring event and Las Vegas Motor Speedway’s fall race but failed to score a win in either. He also finished in the top six at both Michigan International Speedway races in the summer, nearly beating Harvick to win the latter. He crashed from the lead with seven laps left at Indianapolis Motor Speedway, but that was the only time the No. 11 failed to finish a race in 2020. Hamlin also completed 99.8% of all laps NASCAR’s premier division completed last year, on track for all but 23 circuits.

More than anything else, Hamlin certainly hopes to cross the finish line at Daytona without an accident as violent and horrific as Ryan Newman‘s 2020 crash in his rear-view mirror.

If Hamlin’s 2021 is anything like either of his past two seasons, it’ll be a year that promises to provide him with another chance at a Cup Series title.

There’s a few factors that could become obstacles for Hamlin, chief among them road courses. Seven such layouts populate the 2021 slate, more than a sixth of the 36 scheduled races, and this could be a problem.

Hamlin did finish second on Daytona’s road course last year, and also scored a win at Watkins Glen International in 2016. However, he has top-10 finishes in just 13 of the 32 Cup road course races he’s ever participated in, never at the Charlotte Motor Speedway ROVAL and just six and seven times, respectively, at Sonoma Raceway and Watkins Glen. Outside of Daytona, his average finish isn’t above 15th for any of the three aforementioned venues.

Best case for Hamlin, he either significantly improves or, at least, survives the road course races. Bristol’s race on dirt in the spring is a huge question mark for everyone, but Hamlin likely won’t be a favorite there, even among his own team; Gibbs newcomer Christopher Bell is accustomed to racing on dirt, more so than most of the drivers in the field.

Outside of turning right or sliding through corners, Hamlin should certainly expect to have another solid year behind the wheel. His confidence for the upcoming season was evident at Phoenix last November, even having fallen short of a championship just minutes before.

A P4 result just wasn't enough for @dennyhamlin yesterday in the #Championship4. pic.twitter.com/PwPJRIz6w5

As for a worst-case scenario, Hamlin could somehow completely fall off the wagon and fail to win at all, suffering stretches of subpar finishes en route to an early playoff exit. Doubtful, though, given his showing the last two seasons, so it’s likely to be a solid season — or even better — for the No. 11 crew.

Hamlin is coming off one of his strongest seasons yet in 2020. Pair that with Hamlin and longtime sponsor FedEx signing a multi-year extension with the team, and it’s sure to give him renewed confidence as the No. 11 rolls into the 2021 calendar. He has two returning teammates in Kyle Busch and Martin Truex Jr., along with stable newcomer Bell. The quartet should do what any good team does: boost each other up, challenge one another and make those around them better, which Hamlin has certainly done over the past two years.