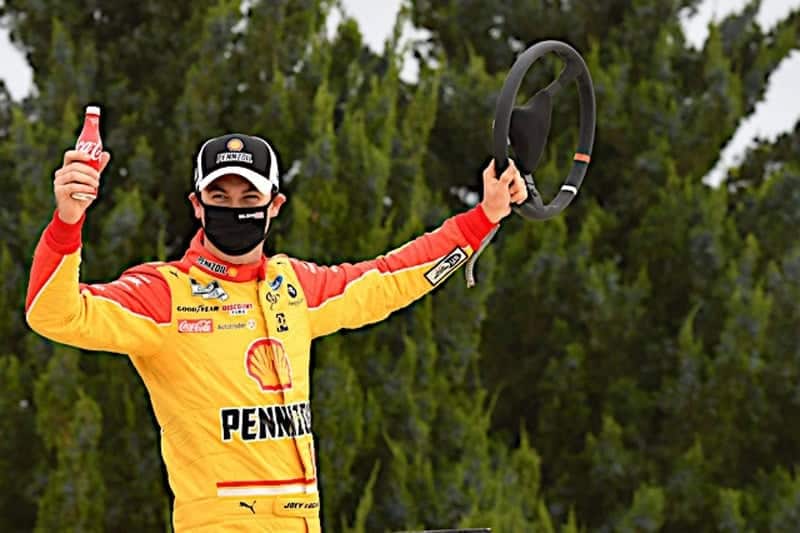 Joey Logano kicked down the NASCAR Cup Series door in the late 2000s, driving the No. 20 Joe Gibbs Racing Toyota Camry. He secured his first win that year, later moving to Team Penske, where his success skyrocketed.

Now, with a Daytona 500 win, a Cup championship and a plethora of wins, Sliced Bread is looking to put together a dominant season after the COVID-19 pandemic threw a wrench in his plans in 2020.

Logano first full-time season came in 2009, securing his first Cup win at New Hampshire Motor Speedway. However, his breakthrough didn’t come after getting settled in with Penske in 2013, winning five races in 2014 and six in 2015, including the Daytona 500.

A crew chief swap among Penske’s cup drivers had Paul Wolfe and Logano teamed up for the 2020 season. Logano began the season with a dismal 26th-place finish in his attempt at hoisting a second Harley J. Earl Trophy at Daytona International Speedway. Logano was caught up in a multi-car pileup that sent the race into further overtime. His luck changed, however, when he took the checkers at Las Vegas Motor Speedway, leading 54 laps. Prior to the 70-day COVID-19 shutdown, Logano went from 13th to first to round out the West Coast swing at Phoenix Raceway.

His third win at Kansas Speedway in the fall secured his fourth berth to the Cup Championship 4 round in Phoenix, where he performed well but fell short, placing third in the finale.

Logano called it a season with an 11.9 average finish in 2020, his worst average performance since the 2017 season, when he concluded with a 15.2 average finish and one win.

The driver of red-and-yellow No. 22 has wins at more than half of the tracks on the current Cup schedule. Logano could be considered one of most versatile drivers in the field, having captured the flag at places like Daytona and Talladega Superspeedway, Bristol Motor Speedway, Pocono Raceway, Michigan International Speedway, Watkins Glen International and Charlotte Motor Speedway, to name a few.

Success has came often for Logano, with three wins at Kansas and Talladega. Though he’s gone home with the trophy at numerous tracks on the circuit, statistically there’s no better courses for Logano than Texas Motor Speedway and Richmond Raceway, where he’s had one and two wins, respectively.

Over the last decade, Texas has been a make-or-break course for drivers looking to clinch a shot at the championship, and it’s certainly not a tough track for Logano, who has 11 top fives and 14 top 10s.

In recent years, Penske has shown raw speed at Daytona during Speedweeks, but only one Ford in the last five years has secured the win at the World Center of Racing’s premier event (Kurt Busch with Stewart-Haas Racing in 2017). While such speed is key to staying ahead, like many other tracks on the Cup’s 36-race circuit, an ounce of luck is needed to make it to the end of the race, much less to victory lane. The same can be said at Talladega’s 2.66-mile track in Alabama.

Despite having mastered the Cup Series in many ways, Logano’s lack of versatility at Sonoma Raceway has been proven with zero wins, only two top-five finishes and four top 10s. Though Logano has one win at Watkins Glen, he has not had much luck at the new-ish Charlotte ROVAL either.

One thing’s for certain: Logano will be in the mix with Kevin Harvick, Kyle Busch, Denny Hamlin and Martin Truex Jr. all season long at the short tracks and the 1.5-milers.

Unless the harrowing amount of road courses — including dates at Circuit of the Americas and Road America — play a factor, including the Charlotte Roval (which in years past, has played as the cut-off race before the Round of 8), there’s no doubt that Logano will continue to hold a top spot among the grid going into Phoenix in November.