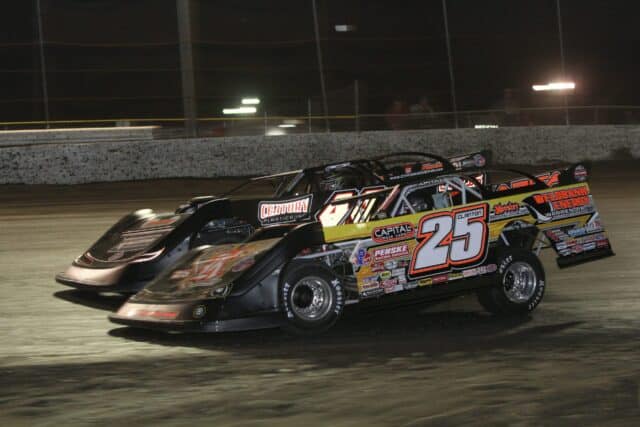 Rewind back to this weekend’s edition of Thinkin’ Dirty, and it’s hard to come up with a more thorough display of immaturity on the racetrack over the course of a weekend. Tyler Erb taking shots under yellow on a third-of-a-mile track. Mason Zeigler following up a speech about wanting to avoid controversy on track with a wreck that flipped a competitor’s late model that same night. A teenager getting disqualified from a feature race because he decided to flip off race officials. And Christian Hanger committing what was arguably vehicular assault following the end of the Cabin Fever race on the Georgia/Tennessee border.

Anyone that’s followed racing of any kind over the recent decade isn’t likely to be surprised by this. As racecar drivers skew younger and younger, immaturity necessarily follows. Some of those episodes are just laughable. Kyle Busch doing donuts for finishing second in an Xfinity Series race back in 2003. Natalie Decker expressing her displeasure on the track by throwing someone’s hat. Spencer Gallagher and John Wes Townley engaging in the most laughable scuffle this side of a frat house. Anyone remember Boyfights from Arrested Development? Their World Wide Technology Raceway at Gateway brawl would have made the cover.

But, as this past weekend demonstrated, immaturity on the track is also dangerous. Sure, trading sheet metal will get a crowd fired up, as will the one-finger salute. But there’s a reason veteran Tim McCreadie sounded as grim as he did following one of what a week’s worth of overly physical racing on the East Bay bullring.

“Fear equals respect; contrary to what anybody fu**ing believes. Nobody in the pit area fears anybody anymore.”

“You used to get your ass beat if you acted like some of these guys act nowadays.”

It’s not that the carnage was exclusively the making of youthful exuberance gone bad; blame the tight quarters, a 30-car starting field thanks to early-year provisionals or even the ocean tides that MAVTV couldn’t stop talking about. But McCreadie’s lamentation is a very real one that given the state of today’s racing community, be it on dirt or asphalt, may not be able to be corrected.

For one, as impossible as this sounds, the age of racecar drivers is still trending down. On asphalt, it’s possible to win ARCA Menards Series races before securing a driver’s license. At the same Screven Motorsports Park that rightly put a teenager in his place for showing blatant disrespect to an adult (doesn’t matter if you’re on a racetrack or not), the crate 602 late model feature had drivers as young as 12 running the full-size machines.

Sure, there’s arguments in favor of such young participation in the sport. Looking at the stick-and-ball sports, at top levels by the time an athlete is 12 they’re traveling coast to coast to play in leagues and tournaments. In a sport such as racing where money talks perhaps more than any other, it doesn’t matter to a racetrack if the sponsor comes with a 12- or a 42-year-old driver attached, as long as they’re towing a racecar to the track. Even before the economic pressures of the pandemic hit, there’s been no shortage of tracks at the local level forced to do whatever it took in terms of classes or age rules to get more cars on the track.

Besides, it’s become a necessity to allow younger drivers interested in racing to get on track and do it for real. With car culture in decline in the United States for decades, the seemingly never-ending growth of iRacing (to now include dirt racing in numerous forms) provides an outlet to drive fast and turn left that is far cheaper, safer and often pays just as well as the real thing. The pandemic environment of this new decade has only strengthened the attraction to iRacing, as for many it involves the same thrills and entertainment without the worry of a jam-packed grandstand.

For all the interest iRacing is generating, however, it’s creating as many problems. Namely, video games are not real. There is no consequence for going four-wide and screwing up. There is no bone-jarring slap of the wall for abusing a right-rear tire 20 laps into a 40-lap feature. And the worst consequence for acting like a jackass while racing? Verbal abuse over a headset.

There’s no shortage of irony here that a veteran racer was taking a young gun to task, even on the Internet. Or that a drag racer had to make any form of lecture about oval track racing (for the record, I’m with Ron Capps on this one).

The thesis of this article is not that iRacing is responsible for the ails of immaturity on the track. Besides, for all the progress iRacing has made simulating the sport, the asphalt experience is one it has a much stronger resemblance to when compared to a dirt track that changes with every lap run. But iRacing is a symptom of a larger disease: a continuing disconnect from reality.

While I never had a racecar growing up (having a doctor for a mother meant that would always be a big NO), I still remember vividly the first time I killed a deer while hunting with one of my uncles. It was a thrill and a great source of pride, but it also was a vivid example of the consequences of using a firearm. Venison jerky is delicious, but seeing the damage a .35 Remington round did to a living creature stuck with me far longer than the meat did. When it came time to teach my younger brother to hunt, I didn’t have to be reminded to teach him safety and being responsible with his shot.

That’s not so easily achieved in today’s motorsport. As great as it is that racecars are safer on the track than passenger cars are on most interstate highways, that fact also means that drivers learning the ropes by hitting all four walls and the pace car have very little to fear from suiting back up and matting it again as soon as the car is repaired. There’s no reason to grow up when actions have no consequences.

And while I’m not advocating for turning the infield of racetracks into boxing rings, there are not a lot of outlets left for drivers to strike fear into their fellow competitors. Big-league NASCAR spent over a decade penalizing competitors for conduct that would have gotten a slap on the wrist on the playground not that long ago. Most local bullrings today have rulebooks that explicitly prohibit any sort of altercation, physical or otherwise. And besides, when adults are racing against 12-year-olds in full-sized racecars, how exactly are they supposed to, as McCreadie put it, strike fear when necessary?

Remember when that b, er, woman slapped Max Papis after the 2013 NASCAR Camping World Truck Series race at Canadian Tire Motorsport Park? Papis was put in a position where he had no choice but to grin and bear a crazy person getting away with a serious transgression. It’s not the same kind of crazy, but McCreadie and many drivers just like him are put into just as helpless a situation these days, racing against competitors that have grown up in an era where the danger of racing has been largely reduced, where building a brand is often more important than building a car or a resume. It’s hard to strike fear or demand respect of a generation that often measures victory 280 characters at a time.

Young drivers are already lacking in life experience. It doesn’t matter if a driver got put in a quarter-midget at age 4 and has been racing for 15 years by the time they’re wheeling a super late model, they’re still 19 years old. And even if they’ve spent 15 years around the racetrack, that doesn’t mean what it used to in terms of becoming a grounded competitor.