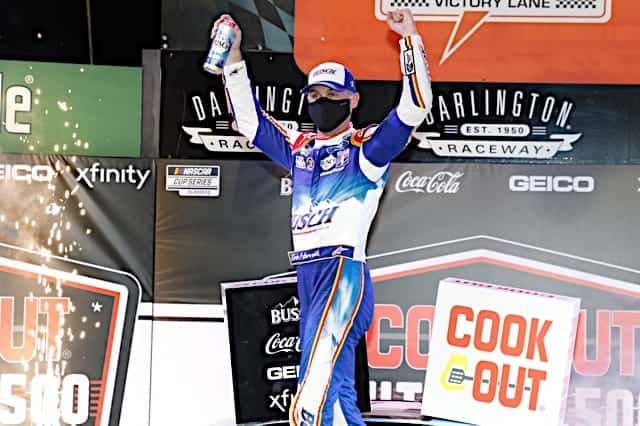 After capturing nine NASCAR Cup Series victories last year, Kevin Harvick looks to continue his winning ways in 2021. With guidance from longtime crew chief Rodney Childers, Harvick is destined to reclaim a spot in the Championship 4 after just missing out in 2020.

But with new venues and seven road courses currently on the schedule, the trek for Harvick’s second Cup title could prove challenging.

Though 2020 was filled with many changes due to the COVID-19 pandemic, Harvick still had his most successful season to date. His nine wins were more than he earned in each year prior, and his 7.3 average finish was the best yet. Not bad for a 45-year-old.

As he began his journey in the playoffs, it appeared that he was well on his way to his fourth straight Championship 4 berth, winning at both Darlington Raceway and Bristol Motor Speedway. However, Harvick’s struggles in the Round of 12 slowed his momentum at the wrong time. While 10th, 20th and 11th are not terrible results, they’re not quite up to the No. 4 team’s caliber.

The Round of 8 proved to be the game changer for Harvick. First, at Kansas Speedway, Joey Logano threw some blocks in the final few laps to secure his position in the Championship 4. Then, who could forget the misty, wet conditions at Texas Motor Speedway the following week? After an early restart, Harvick’s car slid up the track and into the wall coming off a turn. The damage was significant enough to put him behind in points heading into the final race before the championship.

It wasn’t an ideal situation, as Martinsville Raceway is one of Harvick’s historically worse tracks. As the laps wound down with Harvick on the outside looking in, he went to desperate measures.

Memorable Moments of the 2020 NASCAR Season.

No. 5: Kevin Harvick won 9 races but was eliminated in the Round of 8. Needing just one more spot to advance at Martinsville, he tried to wreck Kyle Busch for the position and instead wrecked himself. pic.twitter.com/7dWIFsqOT3

Instead of advancing to the championship, Harvick was left with a battered car.

Although Harvick didn’t get to race for the championship last year, he still has the strongest team of the Stewart-Haas Racing stable. He can contend for top 10s at almost every racetrack, but is especially good at Darlington, Homestead-Miami Speedway, Texas, Phoenix Raceway and Michigan International Speedway.

Harvick won two of the three races at the track Too Tough to Tame in 2020 and is riding a top 10 streak that dates back to 2013. And though Harvick’s evening went south at Homestead last year, it was just his third result outside the top 10 at the 1.5-mile track. It was also the first time he didn’t compete there in November. It remains to be seen whether the date change truly affects his performance.

Additionally, Harvick won the fall events from 2017-2019 and earned 12 consecutive top-10 finishes at Texas. And as good as he is at Texas, he’s that much better at Phoenix; he has 15 straight top 10s since 2013 at the mile-long desert track. He’s also won nine times there- an astounding 25% of his starts. Atlanta Motor Speedway is also a good venue for the 2014 Cup champion, as he’s won two of the past three events there.

One of Harvick’s strongest tracks in recent years is Michigan, as he’s won four of the past five events there. That includes last year’s doubleheader where he led 182 out of 317 total laps —  more than half the laps, even after starting 20th in the second race.

But don’t count him out of the newer venues yet. Harvick won two out of four Xfinity Series events at Nashville Superspeedway and didn’t finish outside the top 10 there.

He might do well at some of the road courses, too; Harvick’s worst finish was sixth at Sonoma Raceway from 2015-2019. That includes his 2017 victory at the Northern California racetrack. Could some of his experience at Sonoma and Watkins Glen International help him at the Indianapolis Motor Speedway road course and Circuit of the Americas?

Unfortunately, the IMS road course is replacing one of his better tracks, the IMS oval, where he won the past two events. It’ll be tough for Harvick to pull out a win on this layout, as he’ll have to battle road course phenom and 2020 Cup champion Chase Elliott.

Harvick might also struggle at Daytona International Speedway and Talladega Superspeedway; it’s hard enough to avoid calamity at these tracks, much less win. He only has one top five in nine events at Daytona since July 2016, though that fifth place came in last year’s season opener. Such is the nature of these types of tracks.

Harvick’s ideal best-case scenario is to win the title, but first he’ll have to make it in the Championship 4. The only way to ensure his spot is to nab a victory at Texas, Kansas or Martinsville, which is entirely feasible.

He could also continue to win at Atlanta, Darlington and Michigan, which would help boost his position in the standings. Earning stage points would also help him in the early playoff rounds, and with seven road courses on the schedule, he’ll need every point he can get.

What about the newer tracks? Harvick’s won nearly everywhere else and has prior experience at Nashville. His car is well built and both he and his team are talented enough to sneak out a victory over the field. He’s also won at a couple of road courses and could very well be in line to win at COTA or the IMS road course, should something happen to Elliott.

However, his teammates Aric Almirola, Cole Custer and Chase Briscoe will also be striving for a victory of their own. Custer won at Kentucky Speedway last year; though it’s not on the schedule in 2021, he still has the talent to pull off a win. Speaking of talent, Briscoe captured nine wins in Xfinity, matching Harvick’s amount in Cup. Briscoe could not only make the playoffs but also score a win at a 1.5-mile or road course. In fact, he won at the Indy road course in NXS last year.

A worst-case scenario would be if Harvick could only claim one or two first-place finishes, or even none at all. It’s happened before; in 2017 he only earned two wins but still had 23 top 10s and was in the Championship 4. His last one-win season came in 2012, when he drove the No. 29 for Richard Childress Racing; he only had five top fives and 14 top 10s that year and finished eighth in the standings.

Still, a no-win season is highly unlikely for a quality team in SHR. Even if he earned two wins, it still could be enough to push him through to the championship. It helps when the driver takes care of their car, avoids wrecks and completes nearly every lap of the year.

Can the dynamic duo of Childers and Harvick continue to rack up victories in 2021? It certainly doesn’t appear that 45-year-old Harvick is slowing down anytime soon. It’s quite the change for a driver who many thought was nearing retirement. Though he’ll have a new teammate once again, new venues and limited practice time at many tracks, he should make the Championship 4.

Even if he doesn’t make it, he’s still likely to succeed, as long as other competitors don’t ruin his races. Look for Harvick to continue feeding his drive to win.