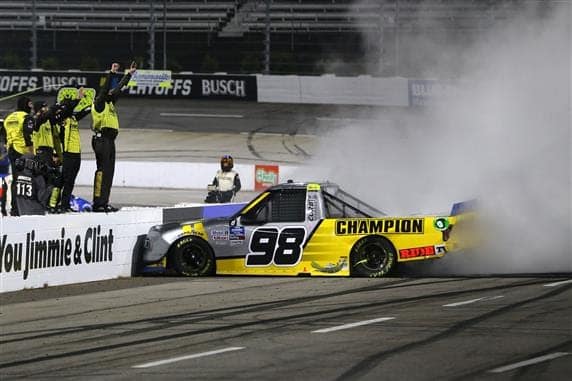 Is this really going to be the “best season ever”?

That’s FOX Sports’ tagline for its coverage of NASCAR Cup Series action in 2021, at least. While I wouldn’t go that far, there definitely are some interesting things to watch out for this year.

Perhaps the biggest test for these race teams is setting themselves up for the future. The Next Gen car is coming in 2022, and it seems like NASCAR is satisfied staying with it for a while. The bigger teams are going to have to balance trying to win races and a championship this year while developing the car they roll out next year. Hendrick Motorsports is a bit of a cautionary tale in that regard; while Jimmie Johnson won the championship and seven races in 2008, the organization only had one other win the first full year of the COT and was down from 18 the year prior.

Kyle Busch really needs to have a good season after a disappointing 2020. His new crew chief Ben Beshore is fairly inexperienced on top of the pit box, but he won three NASCAR Xfinity Series races with Busch in 2019 and has the confidence of knowing he has a great driver in the car.

A new day is dawning at Chip Ganassi Racing, as Ross Chastain takes the wheel of the No. 42 Chevrolet. Florida Man will be stepping into the role as the de facto face of the team, with veteran Kurt Busch getting up there in age and is in a contract year.

Two new teams have made a big splash this off-season. Both 23XI Racing and Trackhouse Racing Team have big-name co-owners (Michael Jordan and Pitbull, respectively), huge sponsors such as DoorDash and Comscape, and two talented drivers between them. Bubba Wallace and Daniel Suarez both have subtle flaws in their game, but if they can work on and overcome them, the sky is the limit for both fairly young drivers.

It’s hard to choose a championship favorite, as shown in Frontstretch’s preseason rankings. One driver that a lot of people seem to be sleeping on this offseason is Kyle Larson. This is a driver who had a lot to prove on the racetrack before his suspension last year, and his time away from the sport was spent winning just an insane amount of dirt races last year.

Larson has championship level equipment for the first time in his NASCAR career now, and he could be very scary for the rest of this field after a few months if getting back in the swing of things. The time away and having to face the repercussions (as comparatively minor as they were) for his actions may well have grounded Larson. The last time a really raw talented driver was forced to take time off (albeit for significantly different reasons) that really put things in perspective, they ended up coming back to win a championship. So it shouldn’t be shocking if Larson does end up doing just that.

Are names still made there?

While there is a fairly large wealth gap in the Xfinity Series this year among teams, the field of driver talent itself is one of the strongest in series history.

Take JD Motorsports with Gary Keller, for instance. Jeffrey Earnhardt and Landon Cassill, both Cup veterans, will campaign for JDM full time. Colby Howard will be running full time as the youngest non-rookie on the circuit at age 19, while Ryan Vargas will return to the team full time. That’s a really solid lineup, and while it’s unlikely they’ll be competing for playoff positions in points, that’s four less really off-the-pace or reckless drivers out there.

Austin Cindric will enter the season as the overwhelming favorite to repeat as champion after a 2020 campaign that turned him into a very complete racecar driver. It wouldn’t be surprising, however, for Noah Gragson to take a big step forward as Cindric’s chief rival this year.

One driver to keep an eye on this season is Myatt Snider. The 26-year-old struggled last year when he wasn’t running for Richard Childress Racing. Now that he’ll be in that seat for all 33 races, it’ll be interesting to see what he’s going to be able to do being able to develop chemistry and consistency in solid equipment. The schedule makeup, with seven scheduled road course events, should benefit the former NASCAR Euro Elite driver.

Is ThorSport Racing making a mistake?

The Camping World Truck Series, on the other, feels a little less packed.

On Thursday, some disappointing news was announced when ThorSport Racing’s lineup was revealed and Christian Eckes and Grant Enfinger will be sharing a ride this season.

It’s ridiculous because two of its three full-time drivers have less upside than Eckes and Enfinger. Johnny Sauter had an off year where he was largely exposed as a radio sweetheart, while Ben Rhodes has shown zero reason to move up after five Truck seasons in championship-level equipment. Compare that to Eckes, who had one season under his belt at KBM with no practice or qualifying and was fairly impressive, and Enfinger, who was in the Championship 4 last year.

Hailie Deegan is probably the most hyped full-time rookie driver in series history. Deegan’s performance last year in the ARCA Menards Series really didn’t impress me all that much, not to mention some of the headlines she’s generated off of the track.

Third in points with no wins in a series with just four full-time drivers and only four top-five finishes in 20 races isn’t very good. Especially when youngsters Ty Gibbs and Sam Mayer both absolutely dominated and would have competed for a championship if they were allowed to run full time. Still, 2020 was also a very strange year, and Deegan may be able to get back into 2019 form as the world gets back to normal.

Zane Smith and defending champ Sheldon Creed will battle it out once again for a championship, as the two GMS Racing drivers seemed to develop a bit of a friendly rivalry on the track last year. Brett Moffitt’s move to Niece Motorsports sounds like a disaster for his championship hopes, as Niece has been a mid-pack team at best since Chastain’s championship run in 2019.

What were some of the other headlines of the off-season?

There were some other developments over the off-season that I will now give my opinion on in five words or less for each of the following topics:

ThorSport Moves to Toyota– KBM finally has a challenger.

AJ Allmendinger to Run Full Time for Kaulig– Could be a championship threat.

Don’t compare Kyle Larson 2021 to Kyle Busch 2015. Busch had 29 wins prior to 2015; Larson has 6 wins total. The two most hyped drivers going into 2021 both have a good-news, bad-news scenario to contend with: They MAY have better equipment, but if they fail to deliver with their new teams, they will also lose their long-term excuse for under-performance.