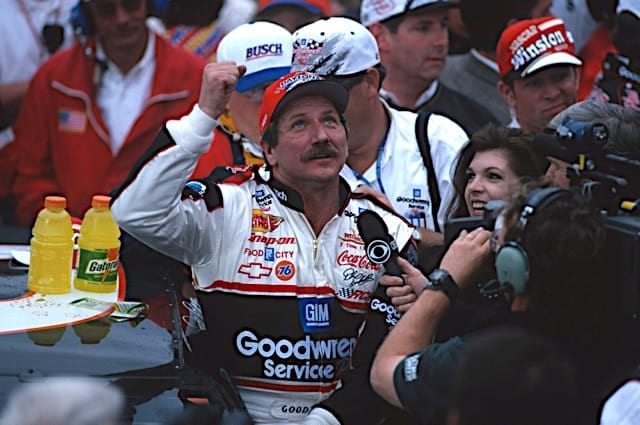 I consider myself lucky.

Born in 1991, I have memories of watching Dale Earnhardt Sr. compete.

While they’re from well after the time he was winning seven championships, I don’t treasure them any less.

In 1998, I was at home watching on CBS with my dad when he finally won the Daytona 500. Two years later, I vividly recall watching with my heart beating in my chest as he held off Bobby Labonte in a photo-finish at Atlanta for his 75th Cup victory.

I consider myself lucky in another aspect.

On Feb. 18, 2001, 11 days after I turned 10, I have no memory of watching a single lap of the Daytona 500, let alone the tragic final one. I’m pretty sure it was due to my dad being in Detroit on a business trip, so there was no one to remind me about it.

What I do remember: turning the TV to ESPN News at some point that evening. That’s when I saw Mike Helton’s unforgettable, haunting announcement to the world:

“This is undoubtedly one of the toughest announcements I’ve ever personally had to make. But after the accident in turn 4 at the end of the Daytona 500, we’ve lost Dale Earnhardt.”

Pretty soon I was on the phone, calling my dad in Detroit to let him know.

It's been 18 years since the death of Dale Earnhardt in the #Daytona500.@KylePetty sat down with then-@NASCAR president Mike Helton on the toughest announcement he's ever had to make. #CoffeeWithKyle pic.twitter.com/NqplNRPBvn

The vacuum left in the NASCAR world in the wake of Dale Earnhardt’s death was immense.

I was among a group of reporters invited to Charlotte Motor Speedway for an evening commemorating the 25th anniversary of the “One Hot Night” All-Star Race.

Among those in attendance were Kyle Petty and Michael Waltrip.

Not among us were Earnhardt and Davey Allison, the latter killed by injuries sustained in a helicopter crash in 1993.

At one point, the conversation turned to the passage of time and our perception of it.

“(1992) seems like a thousand years ago,” Waltrip said. “And nine years later was ‘01 when Dale died and that seems like yesterday. … Time has really gotten messed up for me.”

“I know … the same thing with Adam,” Petty said of his son, who was killed in a crash during Busch Series practice at New Hampshire Motor Speedway 10 months before Earnhardt’s death. “Everything before Adam’s accident sounds like it was history. A million years ago.”

Petty later acknowledged the voids in the room.

“By Davey not being here and Dale not being here now, that adds to it,” he said. “That’s a moment for (them). That changes how you perceive this race as you look back at it. If we were all three sitting here laughing about it and complaining about it, you may view it different. You wouldn’t view it in that nostalgic tone as much as you do now.”

By the end of the month, almost everyone in the NASCAR community would be thinking about The Intimidator.

On May 28, the No. 3 returned to victory lane in the Cup Series for the first time since 2000. This time, it was piloted by Austin Dillon, grandson to Richard Childress.

During the winner’s press conference, I noticed a tweet by another member of the media corps. Paraphrasing, it said “Can we stop making such a big deal about the No. 3?”

All of a sudden, I mentally reverted to my 8-year-old self who spent his free time playing with Earnhardt diecasts on a play mat that depicted Daytona. I didn’t particularly care about Austin Dillon, but this statement was tantamount to heresy.

Curious, I wandered back to the tweet’s author after the press conference was over. I asked him how old he had been when Earnhardt had died.

Needless to say, the passage of time had put me in my place.

For many, history likely seemed to be repeating itself, albeit in a rather unsubtle way.

Coming to the checkered flag of the 2020 edition of the race and battling for the win, contact from behind by Ryan Blaney triggered a horrific wreck on the frontstretch involving Ryan Newman and Corey LaJoie.

Unlike 2001, I was watching and covering the race from my apartment in Charlotte and feared the worst: I would be among those covering the first death in a national NASCAR event in 19 years.

Newman was taken by ambulance to Halifax Medical Center.

After an excruciating amount of waiting, Steve O’Donnell, NASCAR’s Chief Racing Development Officer, appeared in the media center to share a statement.

Fortunately, O’Donnell would not serve in the same role as Helton in 2001.

Instead, O’Donnell said Newman was in “serious” condition, but that his injuries were not life threatening.

Days later, after having suffered a bruised brain, Newman walked out of the hospital hand-in-hand with his daughters.

It’s an easy, and sometimes fun, question to ask.

Then there’s the hard “what ifs?” The questions you probably don’t want to know the answer to.

What if Dale Earnhardt Sr. didn’t suffer a basilar skull fracture and die at the end of the 2001 Daytona 500?

In the wake of the similar deaths of Adam Petty, Kenny Irwin Jr. and Tony Roper in 2000, how many more would it have taken to provide the wake-up call to NASCAR that Earnhardt’s provided when it came to safety?

If not for the years of safety advancements that bore out from it and other incidents, what would have happened to Michael McDowell at Texas in 2008? Kyle Larson at Daytona in 2013? Austin Dillon in 2015?

For Ryan Newman, the one-year anniversary of his survival is “special, more now than ever” because of the 20th anniversary of one of NASCAR’s darkest days.

“He was an idol of mine,” Newman said last week. “And the reality is the start of my crash was really no different than the start of his crash, which was basically the end of his crash. I can see the progression that we’ve had from a safety standpoint and that’s gonna be a topic of many and hopefully not the end topic when the checkered flag falls on (Sunday). The real story will be the racing and not the … big crashes that we’ve had.”

Newman doesn’t believe that the safety advancements since Earnhardt’s death are his “bigger legacy,” but they’re “a big part of his legacy” 20 years on.

Twenty years ago I worked as an admissions gate supervisor at the Daytona 500; started early morning and completed my shift to see the green flag drop from seat I bought in about row 36 maybe 150 yards short of the start/finish line. From there I saw Dale Sr. passing cars by taking to the apron and remaining in full control of his car. Then came the last lap with Jr. and Michael Waltrip leading the race. Dale Sr. wrecked in a tremendously loud crash into the turn 4 wall and Sr. came down from the outside wall and came to rest on the grassy area inside of turn 4. Kenny Schrader came to rest near Dale. Kenny walked close to Dale’s car and turned away. Rescue teams were there and I knew it was bad. Eventually the ambulance left the track for Halifax Hospital without emergency lights on. I drove my buddy back to his car up in Ormond and drove myself home, 35 miles south. Inside I turned on the TV just as Mike Helton said that, “We lost Dale Earnhardt.” I was alone at home and cried. What a fantastic driver he was. I do believe I toasted Dale for the next hour or so; the sedation helped some. God blessed us with Dale’s appearance in NASCAR and may Dale continue to rest well in heaven. I remain a fan of Dale Sr. There will never be another like Sr.

you’re a young fan. i’ve been a fan since the 1960’s and witness the wonderful era of earnhardt in the 70’s and 80’s. he made enemies out of some who raced against him. but in the end they were his peers and all feel the same about his too soon absence from the sport.

nascar didn’t finally mandate that drivers in the 3 series wear a head restraint system until october of 2001, after blaise alexander was killed in charlotte. even losing it’s biggest star wasn’t enough to push the elephant to mandate a change.

the “earnhardt” bar in the roof down the center of the windshield to the dash helped save ryan’s life last year. that was the result of a horrific crash dale had at talladega years before. there’s now a newman safey part in the cars. ryan know, he’s a mechanical engineer.

what we witness last february is nothing short of a miracle, plain and simple. it was not simply ryan’s time.

i would love to see rocketman win the 500 sunday.

When they showed the replay of the crash, I turned to my buddy & said “that’s the same thing that killed Tony Roper”. Ugh, seems like yesterday & a lifetime ago. Like Janice, I got to watch Dale in his heyday –people loved him or hated him & there was no middle ground.

JD in NC
Reply to  Mike

So true. I think to many of the NASCAR fans who are too young to personally remember Dale’s career, they see the image of a hard charging racer with broad fan appeal. But back then during driver introductions everyone either cheered Earnhardt or booed him. Nobody was silent. I remember a race commentator (or driver, I can’t remember which) say either you loved Earnhardt because he was your favorite driver, or you hated Earnhardt because at some point he’d wrecked your favorite driver. One thing’s for certain. He probably held more sway with the NASCAR brass than other other driver before him or since his passing.

I watched Dale race for many years. IMO, he was a dirty driver. Ironic that he died trying an ill-timed block. Those who live by the sword will die by the sword. If NASCAR had taken the deaths of Adam Petty, Kenny Irwin, Jr., Tony Roper and Blaise Alexander seriously, Dale wouldn’t have died. But apparently no one cared about those young men enough to do anything about the safety issue. Tired of hearing about Dale.

Blaise Alexander died in October 2001, 8 mos after earnhardt. na$car pulled their heads out of their behinds after his death. they had to do something. i remember when cup racers raced there a day after blaise was killed stewart was very vocal about the mandate.