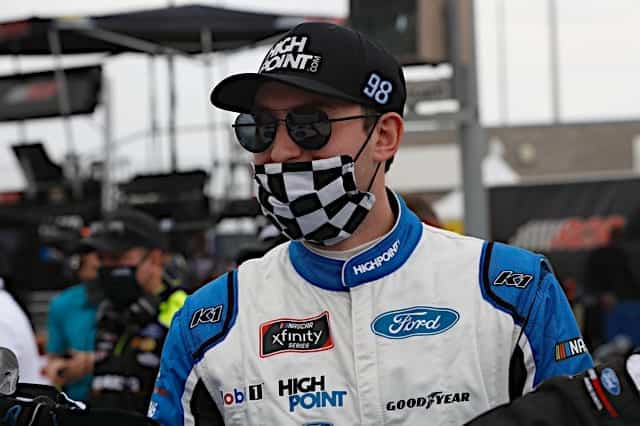 As Chase Briscoe enters his rookie season in the NASCAR Cup Series, plenty of “new” is on his horizon. Part of that includes racing stiffer competition than he’s ever faced.

But Briscoe also brings with him a different perspective on life following a miscarriage suffered by his wife, Marissa, ahead of his Darlington Xfinity Series victory at Darlington Raceway in May 2020.

Frontstretch dove into what Briscoe learned about himself from that experience, as well as leaning on teammates, how he can improve as a driver, and how he would like people to view him on and off the track.

Click here for Part I of this interview with Briscoe.

Zach Sturniolo, Frontstretch: Something else you said [on Feb. 1] was, “I’m personally really excited to see where I need to get better because racing against 25-30 guys that can win week in and week out … is gonna be huge and something I’m really excited for.” What is it about that competition that you enjoy and can take away from to better yourself?

Chase Briscoe: I just enjoy seeing, for me as a racecar driver, I feel like where I gain the most is when I’m around other cars. And at road courses, I’m always normally a little bit off in practice. And until the race starts, I can get around a ton of other cars and see, “OK, he’s beating me here. This is what he’s doing.” Or, “This is where I’m gaining on him.” That’s where I feel like I really come to life in the road course races. And just getting around these other guys and being able to see their certain things that they’re doing on the racetrack that I’ve never been able to see before (but) on TV. So for me, I’m just excited to get around other guys and see where I can really try to get better.

Not that I’m trying to say I’m good right now, but on the Xfinity side, you can still make mistakes and still run top five all day long. Where on the Cup side, if you make a mistake, you’re not even going to be in the top 20. I think that’s the exciting thing for me is you have to be dang near perfect to win a Cup race, and these guys have so many things that they do that make them really, really good. And with SMT [data available] and being able to see their throttle, their brake and all these things that I’ve never been able to use before, I’m just excited to have all those tools and see what they do different just to try to become a better racecar driver, whether I’m racing a Cup car, a sprint car, a midget. All these things are just going to help me become a better driver, and that’s something I’m really excited for.

Sturniolo: Obviously, what you and your wife, Marissa, went through last year with your miscarriage was incredibly difficult, but it also became incredibly public. How did that experience change you in any way, if at all, or perhaps further shape you into who you are?

Briscoe: I think for me, it really did do a lot for me personally because up until that point, at least in my life — Marissa, it’s been different for her — but for me, I never even experienced a death in my family. I never experienced loss at all. So for me, I felt like that was a huge teaching moment I guess in just the sense that not everything’s going to be perfect. There’s going to be times where it doesn’t work out. With how my career even had been in North Carolina, I should have never been to the point I’m at now, but doors have always opened for me. It just was a realization that it’s not always going to work out. There’s going to be times where you get knocked down and you’ve just got to get back up. And I think for me, that’s been the biggest teaching moment.

And then just even my faith, I feel like my faith is way stronger now than it’s ever been. And I think, as weird as it sounds, it’s a huge blessing that it worked out because I wasn’t near as strong in my faith as I am right now. So for me and I think even Marissa, we’re both stronger in our faith than we’ve ever been. And I think there’s a lot we can take away from that and hopefully other people see that through us.

Whenever it happened, we just said if we could help one couple going through the same thing, then that would I guess make it — not make it worth it, but make us realize what the whole purpose was. And after seeing when we went public with it how many people had it way worse than us, then after I won the race how many people it inspired and helped what they were going through, it really made a lot more sense to us, I think.

I break down every time I watch this. Thank you Jesus for placing this man into my life. You knew I needed him ❤️ https://t.co/JU4MKv6vwj

Obviously, we wish that it didn’t happen, but at the same time, I feel like now we both understand, and we’re still going through the process of trying to figure out what we need to do to become parents. But I do think that it taught me a lot, and it definitely changed me as a person.

Sturniolo: On a more light-hearted note, your dogs, Ricky and Callie, seem to be a great joy to you and Marissa. What kind of joy has being a dog owner brought to you?

Briscoe: They’ve been awesome. I can’t believe how into two dogs I am. I’ve always had dogs growing up. My mom was taking care of them, my dad. I obviously cared about them, but I wasn’t the one taking care of them and didn’t have that attachment. Now that they’re ours, there’s definitely a different sense of pride and there’s just that attachment level that I’ve never had before. It’s huge and truthfully, you have a bad day in general or at the racetrack, you come home and they don’t know what’s going on. They’re just happy to see you. I think that’s the best part about it. It doesn’t matter if they haven’t seen you in five minutes or five days. They’re just as excited.

Media day at home has its perks. ? pic.twitter.com/vXelXYyZKl

That’s always a way to bring your spirits up, and it’s just been fun to watch them grow. They’re from the same litter. They’ve got the same mom and dad; they’re just a year apart. So I guess they’re not from the same litter but they’ve got the same parents. Just to see the same things, they’re alike in but at the same time, their personalities are different in certain ways. They kind of do the same things in certain situations. It’s been fun to watch them both grow up and have them in our lives.

Sturniolo: Back on the racing side of things, I am curious about the on- and off-track relationship between you and Cole Custer. It seems like you guys are good friends, and he said as much in his media availability. Since he was a rookie last year in the Cup Series and went through a lot of the same things you will go through this year, how much can you lean on him for advice heading into 2021?

Briscoe: I think a lot. Cole is one of the first guys I met when I moved to North Carolina, so for me, he’s a guy that I’ve always looked up to in a sense and I value his opinion. I value what he thinks that I could be doing better, and he for sure is the closest teammate-wise to anybody I have as far as experience goes and all these things. Cole is definitely probably going to get worn out this year [for advice]. You know, I feel like me and Cole, we come from different backgrounds but he still ran dirt. He still ran dirt midgets growing up, and we still have the same kind of feel, I feel like. So I think for me, it’s huge to have a guy like that in our organization where, experience-wise, he’s relatively the same. He just got out of his rookie season where they had no practice, and all these things I feel like are going to be huge for me to be able to rely on Cole with. And off the racetrack, I really enjoy hanging out with Cole and we’re really good friends. It’s nice when you have that.

Popped up on my memories this morning… Pretty crazy to think about all the things that have happened during that 7 year period. Daytona 500 in less than two weeks. Crazy. pic.twitter.com/bUVqG24hGX

I didn’t come from anything. I had to work to [get] where I’m at. I didn’t write a check to get where I’m at. I feel like you hear a lot of the time that’s the only way to get into NASCAR is by writing a check, and I want to be the proof that you don’t have to do that anymore. There’s still a way to get there. And I’m just a genuine guy that has a lot of faith and I care about people. And I just enjoy racing. It doesn’t matter what it is, whether it’s a Cup car or a sprint car, midget, I just want to make a living driving racecars because it’s what I love to do.