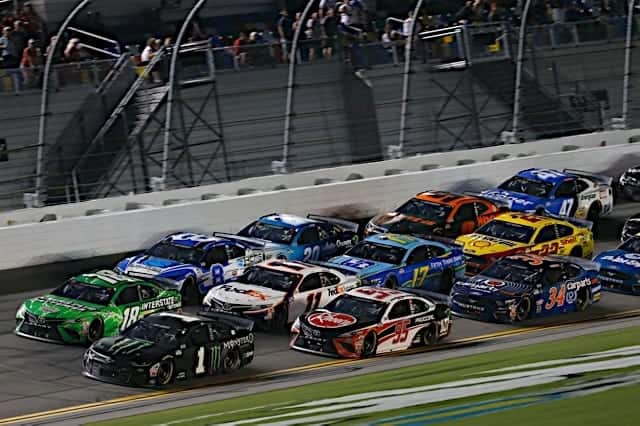 The offseason is now over. I have no doubt that you’ve done something to pass the time over the past three months. Some of you engaged in hobbies, spent time with your families, watched movies and TV shows. A bunch of people probably got addicted to new shows such as WandaVision. Others spent time watching episodes of Legends of the Hidden Temple in order to figure out how the 88 teams that lost in the temple could have turned crushing defeats into glorious triumphs.

That’s all done now. Now, it’s time for NASCAR teams to get back to the track. I’m back as well for my 13th season of TV coverage for Frontstretch. We’ve come a long way since FOX was airing Digger cartoons prior to races, but I’m happy to be back. With some luck, I’ll be able to get back to the track this year. I don’t know what that will look like (or when I’ll be able to it), but I’m going to try. I have to find some way to burn my vacation days from my day job.

The most obvious change on FOX’s NASCAR broadcasts this year is the addition of Clint Bowyer to the broadcast booth after his retirement from driving. He joins Jeff Gordon and Mike Joy in the booth.

As we all know, Bowyer has an interesting personality. He’s prone to wisecracks and some interesting vocabulary. While he won’t pull a countryfied rage quit like at Bristol during the eNASCAR iRacing Pro Invitational Series last year, we’ll have to see what he does do up there.

On Monday, Bryan Gable referenced an interview Bowyer did with Jamie Little at Daytona in 2015. This came during the one occasion that NASCAR tried group qualifying for the Daytona 500. Sure enough, it turned into a bit of a travesty.

This crash forced Bowyer, JJ Yeley, Bobby Labonte and Reed Sorenson to backup cars. Denny Hamlin was also involved, but his team was able to repair his FedEx Toyota.

Bowyer is generally the kind of person that speaks his mind. That is something that fans want to see and hear. However, NASCAR and FOX Sports might have some issues with that approach. Darrell Waltrip had a somewhat similar track record when he came into the booth back in 2001, although not as pronounced. Over the years, his demeanor changed. Do I think NASCAR and FOX got to Waltrip? No. I just think he grew comfortable in his role and it resulted in him slipping.

My main thought here is simply how serious Bowyer is going to take this new position. He’s always struck me as happy-go-lucky with a joking persona, but guest analyst roles are one thing, doing it for a living is another. He wasn’t getting directly paid to do those Xfinity broadcasts (FOX Sports was making a donation to the charity of Bowyer’s choice).

Now, TV is one of his major sources of incomes (if you saw Racing Roots: Clint Bowyer, then you know that it’s not his sole source of income). I wouldn’t be shocked if you saw a different Bowyer in the booth as compared to last year, but his demeanor will not be that much different.

The pits will look different with Matt Yocum being let go at the end of last year. Between all three series, FOX has only three pit reporters in Little, Regan Smith and Vince Welch. Given that all of them have additional responsibilities, they’re likely to get stretched thin. If you’re wondering, I haven’t heard anything about what Yocum’s going to be up to. I wouldn’t be shocked if he shows up on the SRX broadcasts this summer.

FOX Sports plans to have guest analysts once again for Xfinity Series broadcasts, but they haven’t released a list of them as of yet. We do know that Saturday evening’s broadcast will be an interesting one. Bowyer will be joined by Tony Stewart in the booth with Adam Alexander continuing on play-by-play.  tewart doesn’t have much booth experience, although I do remember him goofing around during a then-Busch Series broadcast on TNT from Richmond a number of years ago. That should be worth watching as I don’t think Alexander’s going to be able to control them. Shenanigans could be afoot.

As for the rest of FOX’s portion of the Xfinity season, they announced those plans last year during a press conference in Daytona. There is currently no such press conference scheduled, although that could change (as of this writing, the only press conferences scheduled are Zoom conferences with Joey Logano and Ty Dillon on Tuesday). My guess is that by this time next week, we’ll have a far more complete idea of who is going to be joining Alexander on Saturdays.

FOX has also brought Chris Myers back onto the broadcasts after a couple of years away. He’ll be involved in the Daytona 500 pre-race show at minimum. Tom Rinaldi, who recently joined FOX Sports after previously being at ESPN, will also have a role during FOX’s pre-race show Sunday. I’m not sure what that is, but given his track record, he’ll likely have a good feature or two on the broadcast.

FOX Sports 1’s Camping World Truck Series broadcasts will be going down to a two-man booth for 2021. Welch will continue on play-by-play with Michael Waltrip alongside. This will be a bigger load for Waltrip since he’s always had another analyst to bounce things off of. Not the case now.

With Alan Cavanna being dropped (a move that I did not support at the time and still don’t), Little and Smith will serve as pit reporters on the Truck broadcasts. No word on whether they’ll both be doing it at the same time, if they’ll switch off, or if it will be a combination of the two.

Finally, Little will make history Saturday afternoon when she becomes the first woman to do play-by-play commentary for a major race. Back in November, FOX Sports named Little as the new play-by-play commentator for their coverage of the ARCA Menards Series. She’ll be in the booth for all eight of FOX Sports 1’s broadcasts, starting with the Lucas Oil 200 presented by General Tire. She’ll have Phil Parsons alongside in the booth, while Katie Osborne will be back for another year in the pits. Jamie Howe will also be working the pits.

While the new ARCA TV deal cuts Little’s races from 10 to eight, it will serve as a nice showcase for her to show what she can do in the booth in a relatively low-pressure environment.

Back in November after this move was announced, I wrote that FOX Sports putting her in the booth was not really surprising. Also, putting her with Parsons was a great move. I believe that he will help her grow as a broadcaster.

What’s the long play here for FOX Sports? I don’t know. I could venture a rather substantial guess. If things work out and someone doesn’t poach Little, they could be training her to ultimately replace Joy when he retires. Wouldn’t that be something?

This is not as crazy as it might sound. Joy is 71 now. He’s been in the broadcast booth on and off for 40 years and covering the Cup Series for 45. You can’t go on forever. Eventually, he’s going to want to retire and spend more time with his wife Gaye, or simply relax. While I couldn’t tell when that might happen, Joy is clearly closer to the end of his career than the beginning. It was obvious before the pandemic that FOX Sports wasn’t going to just hire someone from outside to actually call races if Joy were to retire. If they can build Little up to be a better option that Alexander and Welch in the booth, then plug her into the broadcast booth for Cup race telecasts in the next year or two, I don’t see a downside. In the case of my readers here, I don’t think you like Alexander or Welch all that much.

In addition, ARCA announced Thursday that Chase Briscoe will join Little and Parsons in the booth Saturday afternoon for the race. This should be interesting, if only because I cannot recall Briscoe ever spending time in the booth previously.

I’ve spent some time with Briscoe in the past. While Zach Sturniolo interviewed Briscoe recently for a two-part interview (part one ran Monday , and part two runs Tuesday ),I’ve had the pleasure of interviewing him back in 2018 at Lime Rock Park. We’ve also talked a couple of times at IMSA events in Fan Walk situations and randomly in the garage. He’s kind of soft-spoken and doesn’t raise his voice all that much. However, he also thinks things through. He’s not going to say something just to say something. We’ll see how he works out in the booth Saturday.

Coming up this week is constant action. Tonight is the Busch Clash on Daytona International Speedway’s road course. Additional lights have been installed in the infield so the 21 drivers will be able to see what they’re doing down there. Unfortunately, that chicane exiting turn 4 of the tri-oval is still in play.

Wednesday is a practice day, while Thursday has practice and the Bluegreen Vacation Duels. Friday has the NextEra Energy 250 for the Camping World Truck Series, while Saturday is a doubleheader for ARCA and the Xfinity Series. Finally, you have the big one Sunday afternoon with more than three hours of pre-race programming before the Daytona 500. Should be a good week.

I will have critiques of the Cup, Xfinity and Truck races for the first regular edition of Couch Potato Tuesday next week here at Frontstretch. For the first edition of The Critic’s Annex in the Newsletter Thursday, I’ll be covering the Busch Clash.

Glad to see you are back Phil. Looking forward to your reviews this year.

I was kind of disappointed when FOX announced Bowyer would be in the booth. I was happy with the more cerebral/professional commentary with only 2 announcers in the booth. I will be OK with Bowyer as long as he doesn’t bring back the buffoonery that left with DW.

Adding Boyer to the booth. Now another comedian in the booth. We just got rid of one waltrip. I guess i’m gonna watch on tv with it on mute and turn on the radio broadcast.