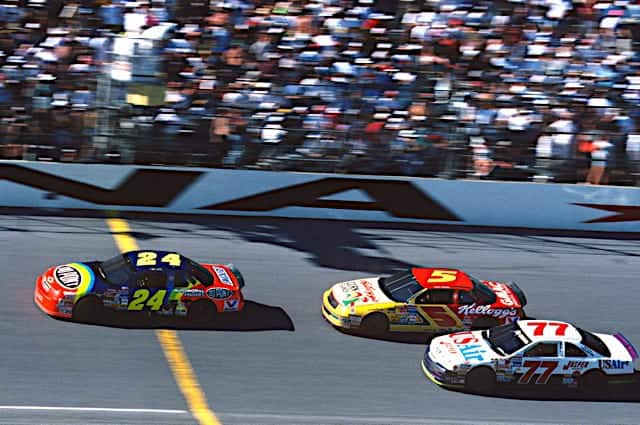 In every form of sports, there is a foremost prize to be had, and the collection of triumphs becomes the most significant measure by which the best are compared. Obviously, the Daytona 500 is the biggest single event in NASCAR, and it seems impossible for successful drivers to reach top tier status without a 500 win.

Throughout the history of stock car racing, plenty of drivers have run up big winless streaks in the big show before finally landing the trophy in almost cinematic fashion. Still, the tear jerkers are out there, stories of heroes who didn’t get the glory and rode off into the sunset without a Daytona 500 title. Some are still chasing the rainbow having watched one adversary after another beat them to the pot of gold.

Terry Labonte has a massive pile of Daytona 500 futility that he spent over three decades accumulating, including a trio of second-place finishes that all seemed to come in races where whatever was happening up front left little room to spare even a mention of the Iceman and his near miss. In 1986, Geoffrey Bodine and Dale Earnhardt waged an epic battle in the closing laps until Earnhardt ran out of gas, handing the win to Bodine and the runner up spot to Labonte. The 1990 upset of the century (when Earnhardt tossed aside another chance to win as if it were a hot potato) saw Derrike Cope stun the racing world. The long forgotten second-place man? Terry Labonte. Then, when Jeff Gordon scored his first 500 victory in an emotional tribute to his cancer fighting team owner in 1997, who finished second? Yep that’s right: Terry Labonte.

Labonte finally gave up chasing the Harley J Earl trophy in 2011, a whopping 32 years after he began his quest. He may not have the most starts without a win, but given how competitive he was in most of them, it’s quite odd that he was never able to break through.

Mark Martin doesn’t have as big a streak as some others, but he is likely the most often mentioned among the longtime non-winners. Martin holds the unenviable distinction of being the victim of what may be the biggest Daytona 500 heartbreak.

In 2007, after his first comeback from retirement, he was running a part time schedule for Ginn Racing and found himself in front with a scant two laps remaining. Kevin Harvick charged forward on the final circuit and wound up alongside Martin as the two thundered toward the finish line. A massive accident broke out just behind them, and while sheet metal was folding like paper in their rear-view mirrors, they flashed across the stripe. Harvick was less than six inches in front and scored his first (and so far, only) Daytona 500 win. Martin, and many others, wondered why no caution had been waved when the crash began, but that’s a whole other story in and of itself.

Tony Stewart is one of the best to ever get in a stock car at Daytona. Unlike Labonte and Martin, Stewart has plenty of wins at the World Center of Racing. However, like them, his name is not present on the one big trophy.

Of all the drivers who tried and failed to visit Daytona 500 victory lane, Stewart is the most puzzling. He wasn’t just good at the 2.5-mile, high-banked landmark, he was exceptional. Stewart rarely ran a 500 without being competitive, leading in eight of his 17 attempts, including 98 laps in 2004 and 107 laps in 2005.

Stewart won everything else there was to win at Daytona. He won the Clash exhibition race. He won one of the qualifying races. He won the Xfinity Series race the day before. He even scored three wins in the summertime 400-miler. But something always stole the opportunity from him when he chased the checkered flag. He’s crashed in dramatic fashion, tumbling end over end down the backstretch. Stewart once blew an engine on the second lap. He crashed almost inexplicably with Kurt Busch while leading near the end of the same ’07 race that Martin barely lost. The following year he took the white flag in the lead only to be pounced on a mile later by the Team Penske duo of Ryan Newman and Busch.

Stewart finally surrendered his dream of Daytona glory in 2016 after coming up short 17 times. While he was probably the most capable of sealing the deal, yet for one reason or another it simply didn’t work out.

Kyle Busch is arguably one of the best drivers in the garage today. Yet, here stands another multiple time series champion with wins in just about everything else that the Cup Series does at Daytona. Just no 500 wins. Like Stewart, Busch has a handful of Daytona trophies. He just doesn’t have the trophy. His laps led has totaled better than 80 twice.

He didn’t score a runner-up finish until 2019 though and his first few outings were pretty rough. Crashes marred several of his early attempts and an injury sustained in the 2015 Xfinity Series race cost him a shot at the win that year.

Also like Stewart often was, Busch is always almost an odds-on favorite to win every year, despite not having done so yet. At 35, he will probably get several more shots at it, and he is too good to keep coming up short. He may not have reached the pinnacle yet, but I have a hard time believing that he never will.

Unless some unforeseen deal comes together out of the blue, this year’s Great American Race will feature the fewest number of former winners in 15 years. Harvick, Ryan Newman, Joey Logano, Denny Hamlin, Austin Dillon, and Kurt Busch will be the only six previous champions in the field. The last time there were only six former winners starting the event was 2006. It’s worth noting that the ’06 version started a string of six consecutive years of first-time 500 winners. So perhaps it’ll be a good opportunity for some veterans like Kyle Busch and Brad Keselowski to get off this dubious list in the near future.