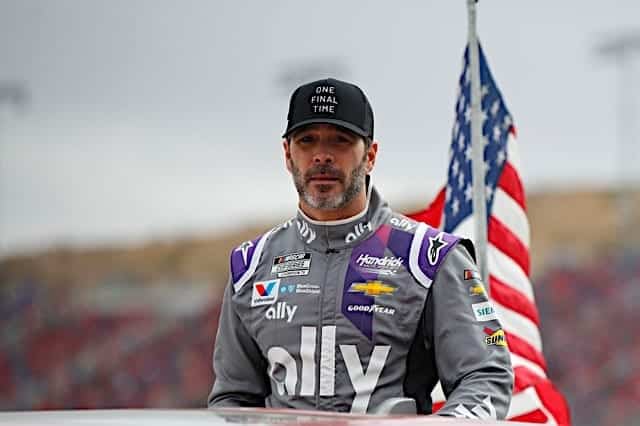 As we sit upon the doorstep of the 2021 season, there are plenty of signs that “new” is in the air.

Michael Jordan and Pitbull are suddenly co-owners of respective teams in the NASCAR Cup Series. The Cup schedule features seven road courses, including Circuit of the Americas, Road America and the Indianapolis Motor Speedway road course. Many drivers are in new rides after another round in the Silly Season carousel.

But perhaps the most glaring sign NASCAR is entering a new era is the absence of Jimmie Johnson. This year’s Daytona 500 at Daytona International Speedway marks the first time since 2002 that Johnson won’t be on the grid to compete in a NASCAR season.

Sure, we had all of 2020 to accept the fact Johnson would be stepping away after a legendary career in the NASCAR Cup Series, stepping out of the No. 48 Hendrick Motorsports Chevrolet after 19 full-time seasons. But have we actually taken time to appreciate the hole left on track without his success?

Johnson’s departure removes 83 wins and seven Cup Series championships from the field. Every NASCAR fan understands the significance of those numbers – tied for sixth all-time in wins with Cale Yarborough and tied with Richard Petty and Dale Earnhardt Sr. for most titles.

Let’s add some perspective, though. With Johnson no longer on track, the only active driver with more than one NASCAR Cup Series championship is Kyle Busch, who claimed titles in 2015 and 2019. Every other active driver with a championship only has one, a list that includes Kurt Busch, Brad Keselowski, Kevin Harvick, Martin Truex Jr., Joey Logano and Chase Elliott.

As has been often noted, by both competitors and fans, Johnson exuded nothing but class during his reign as NASCAR’s most successful driver of his era. The question now sits at the feet of the sport’s remaining drivers: Do veterans now have to take on a more pronounced role in the leadership of the sport?

“I don’t know that you ever really take on a different role in the sport,” Truex Jr., the 2017 Cup champion, said Feb. 5. “I think you just are who you are and try to be true to yourself and true to your fans and do what’s best for the sport. I think obviously Jimmie was a great champion, a legend if you look at seven championships. That’s not a guy you just replace.

“I think somebody will probably step up and maybe be a bigger voice or a bigger personality for the sport, but you don’t really replace guys like that. With that said, we’re going to miss Jimmie for sure on the racetrack.”

Tyler Reddick, who enters his sophomore season in 2021, recalled how influential Johnson was in NASCAR’s efforts to be more inclusive in the spring of 2020, something that stuck with Reddick throughout the year.

“With everything we went through last year, especially the social justice issues, he [Johnson] really took the lead in putting a video together that we put out,” Reddick said Feb. 3. “He was just a natural leader, if you will. It seemed that way. I only really got to get to know him a little bit, just off and on through certain situations when I needed some help with a road course or a track or two, but the way that 2020 went with COVID, there wasn’t a lot of opportunities to really be around Jimmie.”

Reddick said he and Johnson text quite often about Johnson’s next step – a part-time schedule in the NTT IndyCar Series – but also reflected on a moment of Johnson’s wholesome nature.

Reddick, the runner-up in last year’s Rookie of the Year fight, was caught out at one point when his road bike rusted up due to an unexpected rainstorm. Reddick contacted Johnson, who immediately got back to Reddick with a name and number and said, “Go see him.” The bike was fixed the next day.

“That’s just the type of guy he is,” Reddick said. “And some fans probably wanted him to have some more fiery moments I guess when he was upset about things, but he was just an all-around good guy and that’s what made him a seven-time champion, being true to himself.”

Like Truex, Reddick doesn’t believe the next era of NASCAR needs an exact copy of Jimmie Johnson as much as it needs drivers to be real.

“We just need the drivers, including myself, just to be true to who we are, let our personalities shine in those moments, however we feel like we need to feel in those moments,” Reddick said. “We don’t need to hold back. We just need to show it. And for Jimmie, that was just being very cool-headed and handling it all very professionally. He will be missed for sure. It was really cool to have him in the garage, and it’s hard to see him go, but it’s really exciting when someone like him can do what he’s done in NASCAR.”

Similarly, Daniel Suarez has tremendous praise for the outgoing seven-time champion and said Feb. 3 he hopes to brag to his kids about racing Johnson and even beating him at times. Still, he noted that the sport has many vocal personalities in it to push the sport upward and onward.

“I learned a lot from that guy, so I have nothing but respect for Jimmie,” said Suarez, who enters his fifth full-time season at the Cup level. “At the same time, with that being said, we have a lot of good leadership in the sport. One driver doesn’t make the sport. Doesn’t matter who it is. We have a lot of drivers with a lot of experience that have been in the sport for a long time, and they have a very loud voice as well.

“So with that being said and all the respect I have for Jimmie, I don’t think that the sport is going to lack leadership. I think Jimmie was definitely one of them [the leaders], but we still have a lot of loud voices with a lot of experience that are going to keep moving the sport in the right direction.”

I’m not even a NASCAR fan, but reading this great informative article from Zach makes me wonder what I’ve missed.

Great job Zach and thank you for sharing your expertise and compassion for the sport of NASCAR.